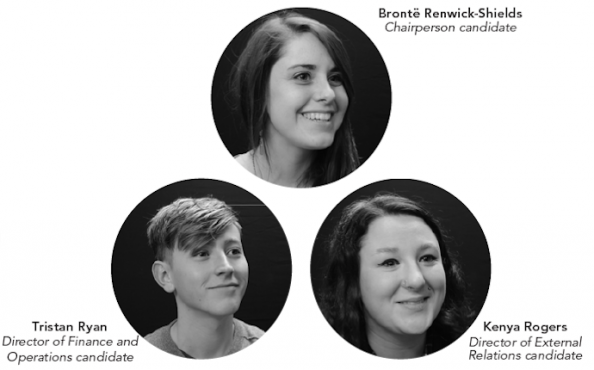 Prior to working for the UVSS this year as a Research and Communications Officer, Brontë Renwick-Shields said she was unaware of the resources available to students at the UVSS. Now running for Chairperson with Involve UVic, she wants to address the lack of engagement between the student body and their student government.

“There needs to be more promotion of what the UVSS has to offer—we need to be engaged in the student community more than we currently are,” she said. “The UVSS needs to be a leader and source of resources for students.”

Last year, the UVSS elections received a 17 per cent turnout, and the Annual and Semi-Annual General Meetings have consistently failed to reach quorum. “The reason there is [low] voter turnout, and there’s low quorums, is because students don’t know what the UVSS can do for them, and what they’re currently doing,” she said.

“What I found, is the university I went to in Sweden had a lot more [of a] sense of community than UVic does,” said Kylie Pettifer, running for Director-at-Large with Involve. “I really want to make sure students feel like they’re a part of UVic, that they have a place that they can go to, and a place where they feel like they belong.”

As the general coordinator of the UVic chapter of World University Service of Canada, Pettifer is consistently working with new arrivals at UVic, and hopes to give students “access to the information and resources that they need to really thrive while they’re students here.”

Renwick-Shields believes there is a lack of activism and drive for social justice within the UVSS. She wants to push for the Student Union to promote causes they are excited about, “whether it’s divestment, affordable housing, or child care. Student unions are there to represent those causes, and also throw really inclusive, great events, and create a safe space for students.”

“As a low-income student, finance is something I feel is really heavy on students,” she said. Renwick-Shields hopes to work toward needs-based grants within the next term, as well as lower tuition and loan interest rates.

In full support of all four referendum questions, she strongly believes in the question on funding for the Students of Colour Collective (SOCC), and cites their anti-racism work as important for creating an inclusive, safe space for all students. Currently, SOCC does not receive individual funding. “The fact that they don’t have individual funding right now is absurd; all advocacy groups should have access to that funding.”

According to Renwick-Shields, the Campus Community Gardens (CCG) and the Food Bank referendum questions are equally important, and play into each other. “We should be creating a safe community where students don’t have to worry about their physical and mental well-being to attend post-secondary education. Food is a huge part of that,” she said.

The Food Bank referendum will allow current UVSS elections funds (previously used for paper ballots) to be reallocated towards the Food Bank, at no cost to students. She believes it to be a “no-brainer,” especially in light of recent Food Bank usage. According to her, they have received over 4 000 users in the last year.

Aside from financial and physical wellness, Involve UVic hopes to continue the push for mental health, including the possibility of a five-day reading break for the fall semester.

“UVic needs to be held accountable as a leader in sustainability—that it isn’t going to invest its money in fossil fuels,” Renwick-Shields said. “It has $30 million in endowment currently invested in fossil fuels. As students, our education should not be coming at the price of climate change.”

Involve UVic is including two prominent Divest UVic members to the slate: Tristan Ryan as Director of Finance and Operations, and Nathan Butz as Director-at-Large.

“There’s a lot more that we can do as students at the university to take a leadership role on issues of climate justice, while remaining financially responsible,” Ryan said. “There’s a real vacuum of leadership in regards to that, that I’d like to step into.”

The referendum for divestment at UVic will not result in an instant divestment process, but will give Divest UVic the opportunity to lobby on behalf of the student body in the hope of re-allocating funds away from fossil fuels.

Although his job title is not as closely tied with student advocacy, Ryan hopes to collaborate with the executive board and Directors-at-Large to take leadership on fossil fuel divestment. He also assures that student scholarships and bursaries would not be affected in light of divestment. “We’re starting to reach that critical mass moment, but we have to understand that this campaign is only a couple years in,” he said.

A carbon-neutral SUB is also on his radar. “It could be very cost-effective, and a benefit for the university’s sustainability brand in the long run to do this. It shows a much-needed environmental leadership at UVic,” he said.