Is Changes coming to the capital? 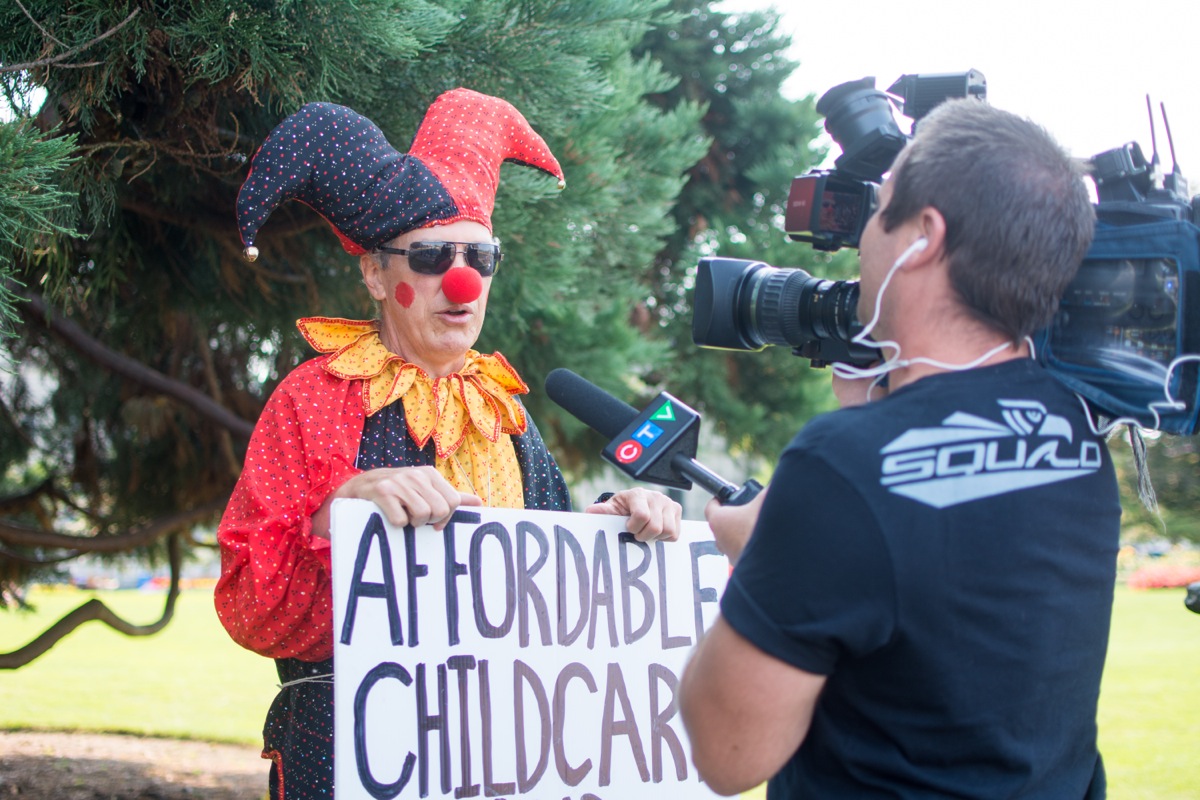 Changes the Clown (a.k.a. Rob Duncan) talks to a CTV reporter during a protest on Sept. 21. –Hugo Wong (photo)

Victoria’s upcoming municipal election has taken a turn for the wacky this week, as Rob Duncan, founder of the awareness campaign Clowns Against Child Poverty, announced his intention to run for mayor as Changes the Clown.

“The clown suit has a really powerful effect on how people perceive your message,” Duncan said. “I can stand on a street corner in a clown suit and hand out flyers and people will laugh, smile, and take one. I could do the same thing without a clown suit and people would just yell at me and walk by.”

Clowns Against Child Poverty got its start during the last provincial election campaign by “crashing” all of the candidates’ meetings with oversized picket signs spreading the word about child poverty in British Columbia.

“We regard [child poverty] as an unacknowledged, unaddressed social crisis in our midst that people don’t even seem to notice,” Duncan said. “People need to talk about it. I can’t understand why it’s not the number one issue on everyone’s mind.”

According to a report based on Statistics Canada data by First Call, a child and youth advocacy group, B.C. has had the highest rate of child poverty in Canada for nine of the last 10 years. Duncan believes that Victoria, as B.C.’s capital, has a responsibility to show Canada how the issue of child poverty can be addressed at the municipal level.

According to Duncan, establishing affordable daycares and a living wage policy will decrease the rate of child poverty in Victoria. “Short of the social revolution that we so desperately need, given the way of the status quo, those are the mechanisms that I think would address [child poverty] most clearly,” Duncan stated.

With a topic as serious as child poverty on his mind, it’s hard not to wonder why Duncan has opted to run for mayor in a clown suit; however, as a social scientist with a PhD in developmental psychology, Duncan has some solid backing for his decision.

“There’s a huge literature in cognitive psychology showing that the more bizarre something is, the more out of place it seems [or] out of context, the more memorable it becomes,” Duncan explained. “If you’re going to the length of putting yourself out there in a clown suit in public, then you’ve got to be pretty serious about something.”

Though Duncan admits that he doesn’t “have a hope in hell of getting elected,” he maintains that drastic measures are necessary for getting the message of child poverty to stick in voters’ minds. “My goal is to influence the conversation, maybe change the conversation if possible,” Duncan said.

The Victoria municipal election could provide the exposure necessary to address child poverty on a municipal level; however, Duncan has a few concerns about running for mayor as a clown: “I’m a little bit worried that I may be prevented from doing this, that they’ll see me showing up in my clown suit and they’ll just say ‘no way’ and bar the door,” Duncan confessed. “I suppose I could shed the clown suit and go influence the conversation as myself, but there is a world of difference in how you’re perceived and [how] your message is received.”