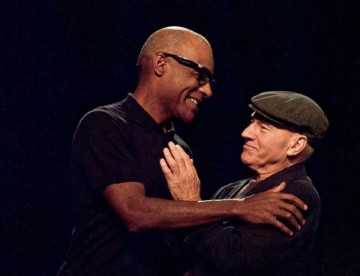 Michael Dorn and Patrick Stewart taught us how to get along, as Worf and Picard in Star Trek: The Next Generation. (Provided by preloc and kanar via flickr commons)

I feel like the human race has a lot of potential and as a species we are doing pretty well for ourselves. We have been able to completely remove ourselves from the food chain (minus the occasional bear, bee, or shark attack). We have thumbs which allow us to handle tools and, more importantly, give a thumbs-up sign to our comrades. We are constantly creating new technologies, ideas and ways to express ourselves as individuals and as a whole. We have been to the moon ourselves, and our creations have been to mars and beyond.

We are propelling at amazing speeds in regards to knowledge, communication and discovery. In the ‘90s I watched Star Trek: The Next Generation with my family and was amazed at the portrayal of the future and the human race. There we were, working together towards the goal of knowledge, regardless of skin colour and background (we even had a Klingon on our ship, so we were clearly super progressive). They had warp cores, 3-D printers, and those cool food things that gave you anything you wanted but for some reason weren’t able to create a simple bar of Latinum.

Today we are getting closer to the technology Star Trek had. Although we obviously don’t have holo-decks, we have 3-D printers and cellphones, which were influenced by Star Trek’s communicators from the first series. The first space shuttle orbiter that went into space was called Enterprise, and I like to think that fact reflects the influence Star Trek has had in our society. All of these technologies are impressive, but I believe we are still missing the most important part of what Star Trek had to offer: the idea that the human race can work together regardless of skin colour or religious belief and strive for the greater goal of exploration and knowledge.

The Star Trek world wasn’t perfect; they still had conflict with their crew mates and aliens they encountered, but they were leaps and bounds ahead of us. With all the technologies around us comes news of bombings, wars, general human corruption and jerkish behaviour. If I had a huge megaphone that was able to speak to every person on the planet in every language ever, I would say, “Hey, could we stop fighting for maybe five years and work together? We can fight after. But since there’s over seven billion of us, I think we should use our abilities to get something done. Even if it’s just to create the world’s biggest shopping mall.”

At what point in technology and knowledge will we all realize that we live on the same planet and are the same species regardless of skin colour or background? Maybe it has to be like the movie Star Trek: The First Encounter. In the film, when Vulcans make contact with Earth, it makes people realize that we aren’t the only ones in the universe, allowing us to band together in reflection of a newer, more realistic other instead of turning upon ourselves. Whether or not aliens are real, it’s odd that with all the technology and knowledge we have, world peace may only seem possible when we have another entity or what-have-you to contrast with to understand that we are more similar than we imagine (instead of all the DNA results, scientific graphs and history lessons). So here’s hoping that aliens come soon and make us band together. We may not have great insight to offer them when they arrive, but at least we can give them a thumbs up.