Why Amazon in Langford makes no sense

Amazon announced their intention to construct a second North American headquarters — dubbed HQ2 — in September, inciting an international frenzy of cities desperate to prove their exceptionalism. At time of writing, Amazon boasts it has received “238 proposals from cities and regions in 54 states, provinces, districts, and territories across North America.” Among the proposals were one each from Langford and Vancouver.

According to Amazon’s eight-page instructional guideline for bids (commonly referred to as the ‘wish list’), this project is expected to cost over $5 billion in capital expenditures and create as many as 50 000 new full-time jobs. With such an enticing pitch, it’s no surprise practically every city official in North America wants to get in on the action — even, in some cases, despite common sense. 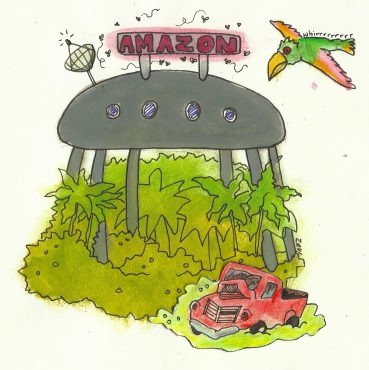 The Amazon Jungle is about as likely a place for the Amazon HQ2 as Langford is. Graphic by Nat Inez, Graphics Contributor

Stew Young, the Mayor of Langford, bragged to CTV that Langford could “tick a lot of boxes” off Amazon’s wish list other cities can’t — a sentiment shared with practically every other member of his competition about their own region.

A box under “important consideration” Langford certainly doesn’t tick is proximity to an international airport with direct flights to Amazon’s prefered destinations. Out of the four locations on the wish list, Victoria International Airport doesn’t even fly to half. Langford lacks a mass transit system, unless you count BC Transit buses — and as someone who relies daily on this system, I think it’s fair for me to say that can only be considered “mass” in generated disappointment and frustration.

Langford’s proposed HQ2 site is less than 150 kilometres away from Amazon’s original headquarters in Seattle. For some perspective, that’s less than a third the distance of Vancouver Island. I hardly think that after all the trouble of scouring a continent for the perfect second location, Amazon would settle on a city practically visible from their existing offices. At that point, they’d might as well save themselves the hassle of customs and annex HQ2 to Tacoma.

Despite common sense, Langford has spared no expense. According to the Times Colonist, Langford is prepared to rename the Leigh Road interchange, which borders the 120 acres of the perspective HQ2 land, “Amazon Way.” However, this offer was overshadowed by that of  Stonecrest, Georgia, who expressed intentions to establish an entire city branded “Amazon” from 345 acres of de-annexed land.

Vancouver and Surrey are also getting in on this madness with a joint bid, and the provincial government has promised to contribute $50 000 to try and make that happen. While it’s amusing that even the provincial government seems to consider Langford too inept to bother extending them the same financial aid, these actions incite a far more significant question: wouldn’t this money do more for Vancouver if put towards affordable housing, or the fentanyl crisis? Prioritization of expansive issues should not be set aside on the shiny improbability of landing a secondary corporate headquarters.

Due to a strict policy against gifts, Amazon was unable to accept a 21-foot cactus sent on behalf of Tucson, Arizona, choosing instead to donate it to an Arizonan museum. Other incentives, like the $7 billion dollars in tax incentives promised by New Jersey governor Chris Christie, appear to be encouraged.

However, these offers all pale in comparison to Calgary’s truly cringe-worthy efforts to stand out from the herd.

“Hey, Amazon. Not saying we’d fight a bear for you . . . but we totally would,” read the 30-metre banner and full page Seattle Times advertisement purchased by Calgary Economic Development, according to the CBC. Additional chalk messages were stenciled around Amazon’s Seattle headquarters, with nauseating comments like “We’d change our name for you. Clamazon? Amagary? Love, Calgary ;)”

Just like Calgary, cities all over North America are tripping over themselves (and their integrity) in the hopes of securing a commercialist pipe dream, without first asking one very important question — do they even want Amazon in their community?

A quick Google of “Amazon labour conditions” churns up a slew of reports that condemn the corporate mogul for unethical and inhuman business practices. In 2015, the New York Times released a damning account of employees being held to “unreasonably high” standards that led to people crying openly at their desks and suffering from medical complications. The Guardian described just last year that employees at an Amazon warehouse in Scotland were “expected to ‘work like robots’ and [had] ‘paranoia with job security.’” Claims like this remain reoccurring trends in media coverage of Amazon.

Furthermore, welcoming the expansion of Amazon is a twist of the knife for the already struggling market of small businesses, when, even prior to HQ2, Amazon has consistently undersold and outpaced local businesses. If small businesses are in fact the backbone of the economy, it would make sense why North America seems to lack the spine to say no to Amazon.

It’s honestly pretty disappointing to see so many cities pander so shamelessly to the whims of a corporate entity, especially local and highly improbable contenders like Langford. Above all, this only serves to show other companies that not only can these cities be bought, but they’ll actually pay to sell themselves out.

Celebration — or in the case of Calgary, idolization — of a second Amazon headquarters only serves to generate an excessive amount of free positive advertising and brand association. In the end, there can only be one winner: not whichever city that’s destined to host HQ2, but Amazon itself.