Students must get radical to stop ever-rising tuition fees 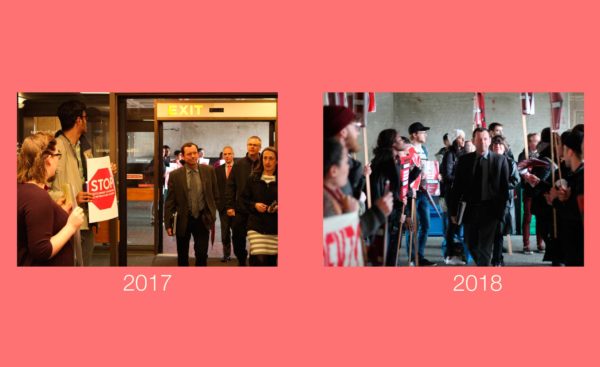 With it being the Martlet’s 70th anniversary, we’ve been doing a lot of digging through archives. What’s remarkable is how similar our stories are to the stories we published 50 or 60 years ago.

Stories about marches for accessible and inexpensive education, problematic frosh weeks, and protests by First Nations groups against unjust murders could all be stories from the last issue of the Martlet — instead, they’re from articles ran in 1965, 1968, and 1972 respectively.

But we didn’t need to look too far back for the last bit of repetitive Martlet news. On March 28, 2017, students gathered outside the Senate Chambers at UVic and loudly demonstrated their disagreement with the university raising tuition costs for international students.

And on March 27, 2018, they did the same thing. Both times the university passed the fee increases.

When Kate Fairley — the undergraduate representative on the Board of Governors who has sat at a table with the university administration all year — is surprised by the hike, it’s clear that the university isn’t interested in negotiating. If they were, wouldn’t they have directly reached out to Fairley for her input on what is a significant hike that’s going to have a massive impact?

So if shouting at the Board of Governors has done little to change their minds, and sitting down at the table and negotiating means little to none as well, how do students move forward to prevent these issues from reoccurring time and time again?

What would the university do if a sizeable block of students refused to pay their tuition until the university passed legislation capping all tuition fees?

First, students need to keep pressure on the university throughout the year. It’s not enough to just protest when budgets have already been produced and finalized — there must be loud and noticeable input before it is voted on.

By the time this year’s tuition increase was publicized, it had already been integrated into the budget with other important line items like the JID Indigenous Law program, so that voting against the budget would come at the perceived cost of the world’s first Indigenous law degree. If the university cannot be transparent about significant increases to tuition with reasonable notice, then it is the responsibility of students—particularly student representatives—to ensure vigilance and that an ongoing dialogue is upheld with the university administration.

Second, the stakes must be raised. It’s probably unpleasant for Jamie Cassels to be yelled at in a Board of Governors meeting, having his humanity and his moral compass questioned for a of couple hours, but anybody can get that same kind of treatment if they comment on Facebook defending bike lanes.

The UVSS should be promoting more radical ways of protesting the hike. What would the university do if a sizeable block of students refused to pay their tuition until the university passed legislation capping all tuition fees? What about a sit-in at the tuition office so other students couldn’t pay theirs, either? What would happen if a hundred or so students marched into the Senate chambers and refused to leave until Jamie Cassels himself promised a cap?

These demonstrations are risky, yes, and require numbers for effective execution. But they’re far more impactful than loudly objecting outside a Board of Governors meeting, and they better demonstrate just how devastating raising fees for one group can be.

Even the students at the Board of Governors demonstration didn’t know how exactly to fight the fee increases. The Martlet doesn’t have all the answers, but we do know that the solution won’t be found through the tired old forms of demonstration we’re using now.