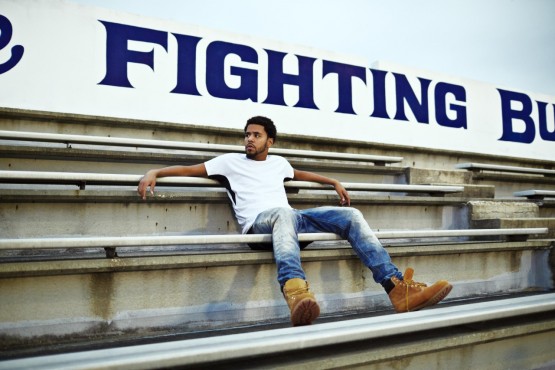 As Kanye once said, “For me, givin’ up’s way harder than tryin’” The same can be said for J. Cole, whose new album makes one thing clear: he can’t help but give it everything. His new album, 2014 Forest Hills Drive is an autobiographical work that catalogs his life from his day of birth right up to the collection’s release.

An autobiographical album – especially one as thorough as this – can be easily botched. The artist can lose focus, sacrifice lyrical acuteness for accurate storytelling, and, most of all, make the work drag on. The concept is daunting and could easily generate a double album. However, J. Cole manages to keep this 13-track work relatively brief, as it clocks in at just over an hour.

One of Cole’s greatest assets as an MC is his narrative ability, which makes an album such as this well-suited to his strengths. “Wet Dreamz,” one of the album’s highlights, recounts Cole losing his virginity as an adolescent. Cole employs a classic old-school flow; probably the kind of sound that he would have listened to at the time when the narrative takes place: “She was in my math class / Long hair, brown skin with the fat ass / Sat beside me, used to laugh, had mad jokes / The teacher always got mad so we passed notes.”

Cole’s rapping, which is solid for the duration of the album, contains many puns and double entendres, which makes repeated listening worthwhile. He rattles off lines such as “Cole, is your phone on zero per cent? / Going off,” or “On the rebound like a book back” with striking regularity.

Another key to the success of the album is the production. Its emulation of the common production styles of each point in time that Cole raps about is both clever and effective. On “Wet Dreams,” the production is decidedly old-school, reminiscent of the production on Jay-Z’s debut album Reasonable Doubt. Indeed, Jay’s influence is palpable on 2014 Forest Hills Drive, especially on the first few tracks.

2014 Forest Hills Drive is saturated with introspective reflection. On “Hello,” one of album’s most nostalgic tracks, Cole’s inner struggle – perhaps everybody’s inner struggle – is as clear as ever: “Shit seems so sad when you look back,” he repeats as the fast beat unapologetically takes him forward into the future. “Time fly by way too quick, don’t it? / Reflection bring regrets, don’t it?” he observes.

But Cole is definitely looking forward even as he reflects on his past. 2014 Forest Hills Drive is the sound of an artist literally putting his life into his art, and it pays off. Cole is only three albums in, and one gets the feeling that he still has more to say. With the success of this collection, he’s given listeners reason to look forward to what he will do next.