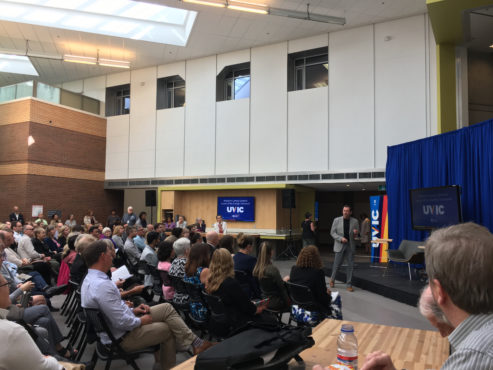 In front of hundreds of faculty, staff, and students in the overflowing atrium of the Continuing Studies Building, Cassels began his speech by highlighting achievements the university has made in the past calendar year, while reminding faculty they are the backbone behind those achievements.

“The heart of the university, the key to our success, and the only forward motion that we can make is because of the effort of each and every one of you in your areas,” he said. “You are the engine of our university, and our success, or lack of success, is entirely due to your effort.”

“[The Strategic Framework] is a relatively simple, high level, road map. It’s a lens through which we are thinking about our future.”

Cassels made specific mention of the recent launch of UVic’s Indigenous Law program — the first of its kind — and then moved on to the main topic of discussion: the 2018-2023 Strategic Framework that was endorsed and ratified by the University Senate and Board of Governors in the spring.

Cassels spoke to the six goals of the Strategic Framework (to cultivate extraordinary academic achievement, advance research excellence and impact, intensify dynamic learning, foster respect and reconciliation, promote sustainable futures, and engage locally and globally), and how they will serve as a template over the next five years to represent the university’s values of equality, diversity, and inclusion.

Cassels also mentioned financial support from both the federal and provincial governments for the university’s academic expansion, specifically in the engineering and computer science departments — these are two of the highest-in-demand areas for students applying to UVic.

“There is a tremendous increase in research support, both for Canadian universities generally, but also for the University of Victoria. Close to a $300 million-a-year increase at the federal level to the Granting Councils and the Canada Research Chair Program, and $2.25 million a year from the provincial government to . . . support graduate students,” Cassels said.

“The reason why we are a destination university that people want to come to, [is] because we [have] a commitment to those values of equity, diversity, and inclusion.”

“I had a tour through our recently-completed science labs a couple of months ago, and it’s so exciting. The message that sends to our students about the opportunities they will have, and the messages it sends to faculty and staff who might want to come and work for these facilities, sends a really strong and powerful message about taking quality seriously.”

Nearing the end of his speech, Cassels announced the early stages of a new 600-bed student housing project valued at $200 million.

“It’s the biggest capital project that this university has ever undertaken,” he said.

Before concluding, Cassels reiterated that UVic will continue to pursue strategies for attracting the most talented staff and students from around the world to Vancouver Island.

“The reason why we are a destination university that people want to come to, [is] because we [have] a commitment to those values of equity, diversity, and inclusion, because we have a commitment to our students, and because we are located in one of the most beautiful parts of the world.”