Kanye was right. Why So Appalled? 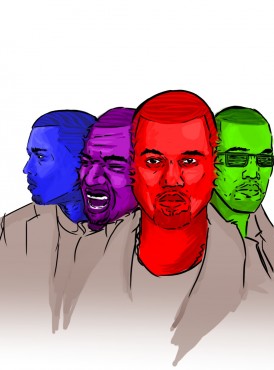 Kanye West and awards shows don’t mix. Since 2004, he’s made sure his views on any subject are heard. His 2009 interruption of Taylor Swift at the VMAs has become a cultural entity unto itself. And, at this year’s Grammy’s, Kanye managed to further his reputation as an awards show’s worst nightmare when he unabashedly voiced his opinion regarding Beck’s Album of the Year win. “[Beck] should have given his award to Beyoncé,” Kanye said.

The Internet is outraged. “Jesus shitting Christ Kanye is a cunt. Seriously.” reads one of the more blatant tweets. “#KanyeWestIsADouche” is sort-of trending. Almost every news source has something to say on the topic. But are these negative opinions justifiable?

Beck is an integral piece of indie-rock, and has remained remarkably consistent since the early ‘90s. Two of his albums are on Rolling Stone’s “500 Greatest Albums of All-Time” list. His legacy is non-debatable. But he didn’t have Album of the Year. Kanye was right: Beyoncé did.

Her self-titled LP was a monster of an album. First, she dropped it without warning—a move that has since been copied by icons such as D’Angelo and Drake. After the initial shock of the release, something else became clear: This was not the Beyoncé we were used to. This was a new and improved Queen Bey, with the songs to back her up. These were not the three-minute shots of mass-appeal pop hits circa “Single Ladies” and “Diva.” Each song on the album is a complex mini-epic that not only holds its own as an individual, but contributes to the towering album of which it is a part. Beyoncé re-branded herself as a feminist, and became more of an artist (in the true sense of the word) than her earlier albums showed.

Music is inherently subjective, and with the ease of access the masses have to music, nearly everyone can voice an opinion on it. So, if the average person can freely express musical judgement online, why is it such an outrage for Kanye —who has 21 Grammys—to voice his opinion in real life?

Maybe it’s his notoriety. The world has been exposed to Kanye’s abrasive personality for over a decade now, from the infamous “George Bush doesn’t care about black people” moment to last year’s Zane Lowe interview rant, and more. But isn’t it refreshing to see a cultural icon as ubiquitous as Kanye simply not give a fuck about people’s reactions? There has always been a certain circle-jerkiness surrounding awards shows like the Grammys. Musicians are expected to respect the jury’s choices with humility. But given the ridiculousness of the choices of Grammy winners in recent years (Macklemore winning over Kendrick Lamar, Kanye, Drake and Jay Z last year for Best Rap Album? Really?), isn’t it about time for the artist with the most awards to stand up and call bullshit?

If anything, we should thank Kanye. Calling him a douche only feeds into the grandiose irrelevance that awards shows such as the Grammys represent. Nobody agrees on anything when it comes to music, but that doesn’t mean that opinions shouldn’t be expressed in the first place, especially when it’s coming from the man with, arguably, the most credibility.