During a performance in December, prolific hip-hop artist Kanye West announced that the reality TV star Kim Kardashian is his “baby mama.” West recently took a flight from L.A. to Victoria to discuss not only his expected child, but also his upcoming album with the Martlet.

MARTLET: First of all, thanks for joining us, Kanye. I know it’s less sunny in Victoria than it is in L.A.

KANYE: I been poppin’ my vitamin Ds. Listen, there’s a lot of clouds out there. A lot of grey that’s goin’ try and break you down, right? But you gotta be like: I’m not takin’ that. You gotta fight back all that negative energy. You gotta shout, “I’m an individual! I’m an artist!”

M: Maybe we could talk about your upcoming album.

K: The Greatest Record of All Time?

K: Look, I’ve literally poured my being into it. I don’t have a title just yet, but I know its place in music history. I find it offensive unless the album’s referred to as the Greatest Record of All Time.

M: Let’s talk about your past work. You’ve appropriated diverse genres and styles: R&B, synthpop and classical music to name a few. As a producer and songwriter with an ear for how to blend styles, what inspires the beats of your new album?

K: The baby up inside my baby mama.

M: You mean to say the development of your paternal instincts or emotion has inspired the music on your new album?

M: I beg your pardon?

K: The beats you hear, that’s my baby thumping his little feet and fists against the belly of my baby mama.

M: Are you telling me you’re in the process of recording your new album through Kim Kardashian’s uterus?

M: Wow. Can you speak a bit to how this idea occurred to you?

K: Me and Kim was in the theatre watchin’ Les Mis over the holidays — you seen Les Mis?

K: Well, it roused the baby. Me and Kim are watching all these little poor Frenchies running around and muskets and Russell Crowe and flags, and next thing you know, Kim takes my hand, puts its right on her little belly and I feel it. I feel him —

M: Kim was only so far along in her pregnancy, but you knew it was a boy?

K: Look, there are some things artists just know, such as when you have the idea for the Greatest Album of All Time. So when Kim and I got home from the movies, I said, “We got one chance in our lives to do this for our baby, for ourselves, for the music industry, for human history, the world and the universe.”

M: Using your unborn child for your album?

M: Am I crossing any lines if I ask you how you go about your recording? Can you speak a bit about your process?

K: That’s cool. Man, I’m just like Michelangelo talkin’ ’bout his brushes. To get the beat, I brought Kim into the home studio. I called up some Malibu doctors. They brought their equipment. It’s all very hi-tech. You know — the blue goo and the electronics and stuff. They stuck that all on her belly and we’ve been recording since. She’s actually at home in my prenatal studio as we talkin’ right now, just waiting for the next kick or fist or whatever.

M: Is that at all uncomfortable for Kim?

K: Aw I see what you’re sayin’. You mean, like, does she feel used? Well, you gotta remember: first thing is my art, first thing is my music. And then don’t forget there’s already machines out there that get hooked up to baby mamas. You heard of breastfeeding pumps?

K: I’m pretty excited about the tracks. I’m opening with a real emotional number, “Tales of the Trimester.” Then there’s “Yankin’ on Ya Chord.” We’re in the process — me and Kim and the doctors — of figuring out how we wanna go about shooting a music video right now, while the baby’s still inside.

K: We may use a stunt baby.

M: But as for the sound of the album itself?

K: Well, Victoria, you’ll just have to wait to find out. 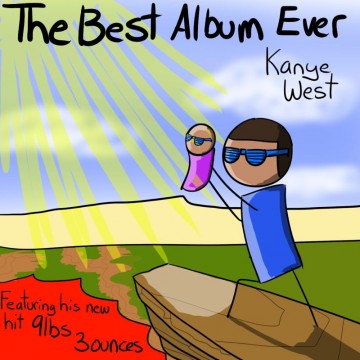 Kanye’s single “9 lbs. 3 ounces” will hit the iTunes store next month. His baby is due in  July. His recently titled album, ULTRASOUND, is due sometime in Kim’s second trimester.