Keys N Krates talk doing it live, Victoria, and fear of missing out 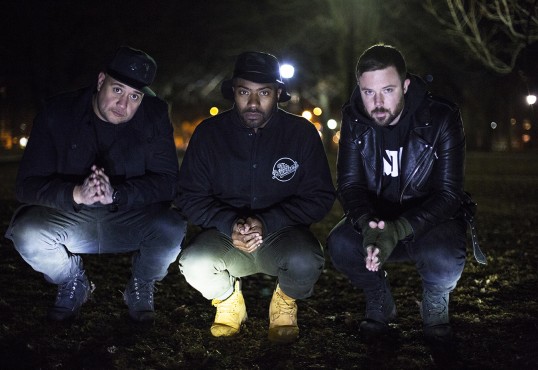 This time of the year can be stressful. The air is frigid, the days turn to night before they’ve even really begun, and those assignment due dates that felt like years away in September have now transformed into ticking bombs, only minutes from going off.

A classmate asks if you have any plans this weekend, you just laugh. Plans? Don’t ask me about plans.

But it’s time to put those books away, set the laptop down, and step away from the library. It’s time to make some plans of our own.

On Saturday night, the EDM phenoms out of Toronto — Keys N Krates — bring their world-renowned live show to Sugar Nightclub as a part of the Home Grown Saturdays concert series.

Formed all the way back in 2008, Keys N Krates is David Matisse (keyboards), Adam Tune (drums), and DJ Flo (turntables). The trio plays a hard-hitting blend of hip-hop, drum & bass, and trap music that, in an interview with the Martlet earlier this week, DJ Flo described as “weird rap beats you can dance to.”

Keys N Krates is unique to their genre, oftentimes being referred to as the world’s “only trap band.” What really makes them different, however, is the live show.

When Keys N Krates plays live, they play live. “The chemistry and feeling of playing completely live is something that can’t really be duplicated just by playing music from a laptop,” said Flo via email. “We really feed off of the energy of the crowd and it’s that give and take that creates a truly live performance and party.” The drums, keyboards, turntables, and samples are all done in concert and on the spot, forcing the guys to work, play, and create on stage, every single night they put on a show.

“Our tempos aren’t perfect, we make mistakes, we laugh, it’s all a bit of shit show really, but it makes it fun.”

The last time the guys were in Victoria was for Rifflandia 2014 and they seem to enjoy coming back here. “[We used to enjoy] getting to have White Spot on the ferry from Vancouver, but now that we fly in, I guess it’s going to have to be the awesome people of Victoria, and the beautiful scenery. It really is a gorgeous island,” said Tune.

Victoria is largely a college-town, and the band knows that making the trip out here and putting on a show so close to the end of semester and exam time could be a risky venture. Tune addressed the potential stay-at-homers with, “All your friends will show you pictures from the show that they all made and shared memories at without you. Now why would you want to put yourself through that?”

The Victoria show is the last chance to catch the band before they take a break from touring for most of the month of December. In 2016, the band embarks on a two-month long tour in conjunction with the release of their new EP, Midnite Mass. They have no immediate plans to come back to Victoria as of yet.

Sometimes the best medicine to de-stress from school is a breath of fresh air. Sometimes all that’s needed to push through that procrastination is one more dosage of good times spent with friends. Sometimes all you need is a night full of “weird rap beats.”

And besides, Matisse said it best. “I’ve been out of college for a while now, and no job has ever asked to see my diploma and I’m doing fine. Just sayin’.”