Killy delivers a short but sweet performance at Vertigo 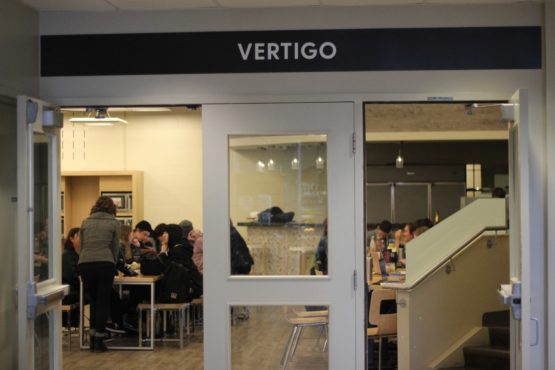 Vertigo is usually filled with studying students. The UVSS are working to changing its perception.
Photo by Cormac O’Brien, Editor-in-Chief

In the constantly evolving new generation of hip-hop music, a rapper’s live performance can make or break their career. On Thursday, Toronto rapper Killy proved that he was here to stay, delivering a high-energy performance to the sold-out crowd at Vertigo in the Student Union Building. UVic was the fifth stop on the rapper’s first major tour, supporting the release of his project Surrender Your Soul.

The doors to Vertigo opened at 7 p.m., as hundreds of fans were checked by security and packed into the venue. Around 8:30, the other members of Secret Sound Club, Killy’s musical collective, took to the stage to perform their own songs and hype up the crowd. A4 performed his recent single “Nonsense,” followed by Jughouse Johnny and SEGA, both of whom performed unreleased tracks. Afterwards, Killy ran onto the stage rapping “Surrender,” the fast-paced intro song to his new project.

Standing in the crowd near the front, it was hard to even bend down to tie my shoe. The hivemind of the crowd, which was mostly composed of UVic students and high school-aged teens, had taken over. By the end of Killy’s second song, “Very Scary,” I had already broken a sweat and could tell the crowd was in for a good show. For those who didn’t want to be packed into the crowd in front of the stage, the raised sections on the sides of the room offered a great view of the performance and a refuge from the mosh pits.

“I’m very happy with how it went and it sounds like from those who went they had a good time too” said UVSS Director of Events Noor Chasib. He commented that the event went extremely well, and had a great turnout.

After Killy delivered his song “Fireflies” from on top of the PK sound speakers, the crowd broke into a chant of “Fuck Lil Xan,” which has become a trend at many of Killy’s shows. Killy’s feud with Californian rapper Lil Xan has been heavily covered by hip-hop media, and it was clear to see whose side the UVic crowd had chosen. The chant dissolved, as Killy played a currently unreleased song to the crowd.

After a few more songs, Killy ended the night with his breakout single “Killamonjaro,” parting the crowd during the buildup. When the beat of the song dropped, the crowd went crazy, and Killy jumped into the centre, crowd-surfing over his fans to end the night. Around 10 p.m., the crowd dispersed from Vertigo. For anyone who still had the strength to walk after the non-stop energy of his performance, the night continued at the official afterparty at Upstairs Cabaret, hosted by Killy and Secret Sound Club.

Two days after finishing up his sold-out Canadian tour, Killy announced his first ever world tour, scheduled throughout the USA and Europe. The tour currently includes 33 stops in two months — including JMBLYA Music Festival in Texas, Rolling Loud Festival in Miami, and Fire is Gold Festival in Brussels, Belgium — and in the brief downtime between finishing a tour and announcing another one, Killy teased new music with DJ Carnage and Yung Bans on Twitter.

There is an incredible amount of momentum behind the up-and-coming Canadian rapper; fans and critics alike can expect to hear his name a lot more in the future.

You can check out Killy’s debut project Surrender Your Soul here.