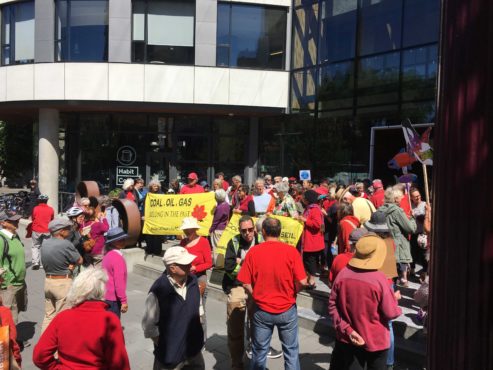 Demonstrators at the phone-in. Photo by Josh Kozelj, Staff Writer

About 200 protesters wearing red clothes gathered outside the Atrium in downtown Victoria to rally against the federal government’s recent decision to purchase the Trans Mountain pipeline from Kinder Morgan.

The demonstration was planned in solidarity with 80 other protests across the country for the National Day of Action to Stop the Kinder Morgan Buyout. Protesters wore red clothing to symbolize their anger with the government buyout.

Initially only about 20 people said they would attend on the Facebook event page, so organizers expected to host a tame phone bank  where protesters planned to call Federal MPs to voice their displeasure.

Sarah Potts, an organizer of the Rise and Resist Kinder Morgan group, says they decided not to protest outside of the office of NDP MLA Carole James who has held an anti pipeline stance in parliament. Instead protestors planned to phone the headquarters of other members of parliament — including Justin Trudeau.

However the event quickly turned into a full-scale rally as momentum against the Feds $4.5-billion investment into the stalled project grew. “Way more people showed up than we imagined, so we have turned it into more of a creative action,” Potts said.

The event started with fourth-year UVic student Emily Thiessen, a fellow member of Rise and Resist and the organizer of the rally, standing atop a ledge outside Habit Coffee phoning the office of Trudeau.

Once Thiessen got through, she put the representative of the Prime Minister’s office on speaker phone, and encouraged the crowd to sing and yell “the pipeline will not be built” into her phone.

“We didn’t elect a single Liberal MP on all of Vancouver Island [in the 2015 federal election], and most of the NDP and Green political representatives are on board to stop this pipeline expansion,” Thiessen explained. “So, we thought what would actually be more effective is for us to call into other ridings in Canada and tell them here in Victoria, we are going to be directly affected by a spill.”

The Rise and Resist rally comes days after hundreds of Victorians marched in a rally last Thursday in defiance of the pipeline.

“People in Victoria are angry about this, and we want to let other people know at the same time as their constituents across Canada are rallying outside of their offices,” Thiessen said.

Ezra Loggin and Alex Papp, current and former UVic students respectively, were two of the protesters who joined in halfway through the rally in an attempt to reach members of parliament.

“The fact that it’s come to this point where we have young Canadian citizens just like calling people up — it’s absurd that people are so against this and yet it’s still happening,” Loggin said.

Despite the strong turnout of demonstrators, Papp and Loggin both claimed they felt disappointed after not being put through to MP offices and being told to leave messages instead.

“At this point I find it sort of infuriating that we’re just not at all being listened too,” said Papp.

Thiessen says her group have more creative ideas in hopes to garner more support against the Trans Mountain pipeline expansion, but preferred to keep those plans secret for now. She says the group plans on taking more direct action in the future, including sending people over to the mainland to demonstrate support for the Inlet Coalition in Burnaby.

For now, Thiessen is encouraged by the outpouring of support for her group’s rally and believes it shows how people on the island feel about Ottawa’s pipeline plans.

“We thought we were organizing a phone bank with maybe 30 people, but we had like 200 people,” Thiessen said. “That just shows how angry people are in Victoria.” 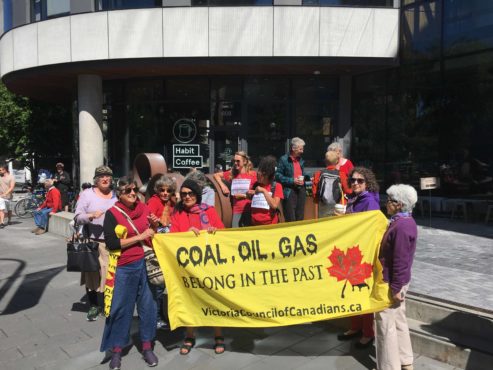 Demonstrators at the phone-in. Photo by Josh Kozelj, Staff Writer