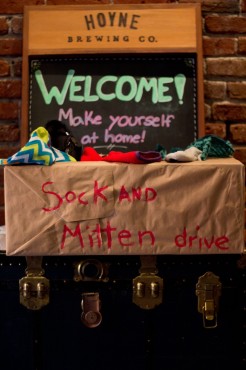 Lacey-Lou Tapas Lounge has started a Sock and Mitten Drive to help share some warmth over the colder months. As part of the drive, started by Lacey-Lou’s art and events coordinator Amelia Szczepanowski, the restaurant will be collecting donations up until Christmas and handing them out to those who need them as the campaign progresses.

The Sock and Mitten Drive, or the Sam Drive, is named after Szczepanowski’s brother Sam MacLeod, who passed away this October. Recounting her brother’s continuing willingness to help others, Szczepanowski was motivated when a woman living on the street asked her for money. Unable to donate anything at the time, Szczepanowski put together a care package including cough medicine, mittens, and socks for the woman.

“I saw her the next day,” said Szczepanowski, “and passed off all the goodies and she was so thrilled by the socks. She pulled her pant leg up and exposed the pair of socks she was wearing, and she said that she’d found them.”

After this encounter, Szczepanowski realized that socks are often forgotten when people make donations to clothing drives and came up with the idea of the sock drive. “Lots of people can’t afford to share the money that they have,” she said, “but everyone has an extra pair of socks.”

The project started on Nov. 15 and soon caught on in other locations. There is now a sister project in Nanaimo, as well as donation locations in Cowichan Valley and Kelowna. After getting inquiries about starting similar projects in the Lower Mainland, Szczepanowski replied, “I keep telling them that the people who need help here are no more important than the one’s where you are. You help your people and we’ll help our people, but we’ll all do it under the same name so it’s still in honour of Sam.”

On starting the project, Szczepanowski said, “This year we’re basically just feeling it out. It started on a whim so we didn’t build up any goals. Next year, whatever number we have at the end of this year we will try and top.”

Since being in contact with several people living on the streets, Szczepanowski said that the most support comes from those who need support themselves. “They’re the most compassionate when they hear my story about my brother,” she said. “They’re the ones who think it’s the greatest idea ever and tell me how important socks are.”

Szczepanowski hopes that the Sam Drive will continue to honour her brother in the years to come. “He would like the idea behind it,” she said, “but I think he would think that it’s a bit too flashy for him. He did nice stuff and never asked for credit for it, so I think he would be embarrassed to know his picture was on the poster.”