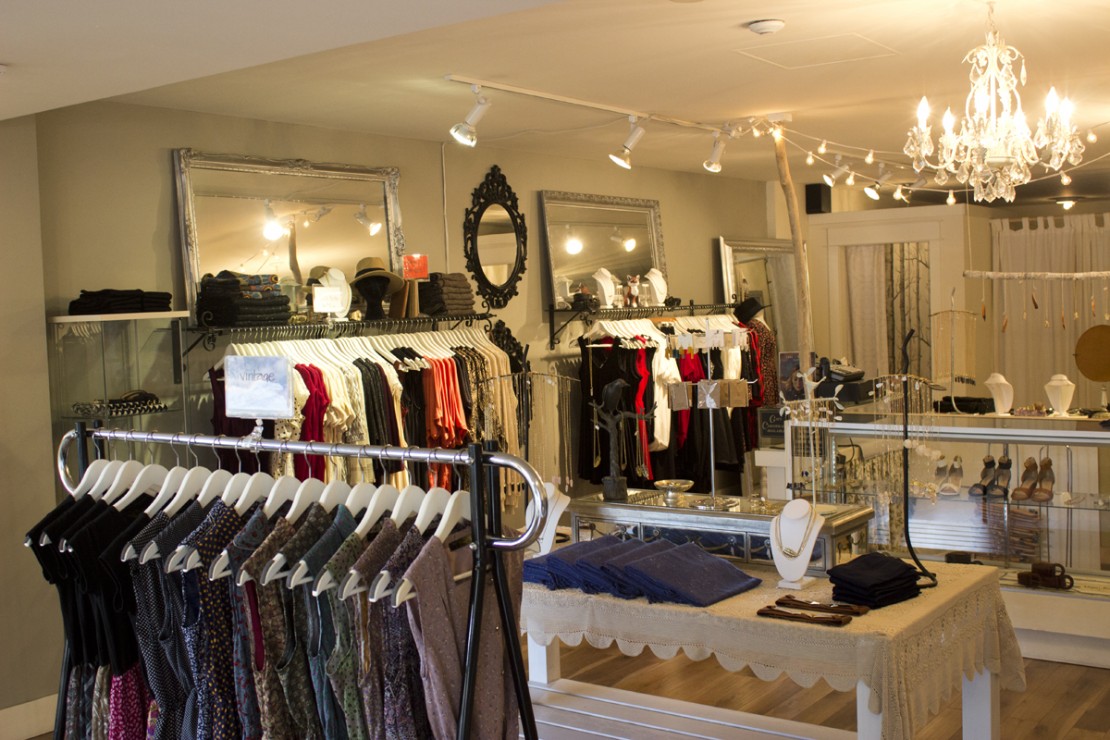 According to Lark & Sparrow boutique owner Willow Hillard, there are two types of women that shop at her store: a lark, and a sparrow. The lark is edgy, a little goth and tomboy, and the sparrow is feminine, sophisticated and elegant. “Sometimes women go from one extreme to the other, and sometimes they’re somewhere in between,” she said. Hillard is both a lark and a sparrow—“it depends what day you catch me on.”

She describes the Cook St. Village womenswear boutique as “a folky, magical, white, soft place—like a luxurious forest.” The location is celebrating its fifth year of business since its opening in March 2010. “I wanted ,when people walk into the space, to see birch trees, soft light, sparkle, and to feel inspired by their surroundings,” Hillard said.

She has been surrounded by boutique-type businesses her entire life. “I come from a long family history of owning boutiques, and it’s a bit of mentorship within our family,” she said. Hillard creates her own logos, business cards, and is completely immersed in her business’s direction.

Growing up in Courtenay, she used to skip school to work at her mother’s business, learning about visual merchandising, sales, and ordering stock. Her family now owns four individual stores on the island in Sidney, Oak Bay, Broadmead, and including her boutique in Cook St. Village. “We’re very ambitious women,” Hillard said.

After graduating from UVic with a fine arts degree, Hillard opened Tiger Tiger, a vintage boutique in Vancouver. After her third child, she moved back to the island, but never gave up her vintage roots. Ark, a Vancouver-based brand, provides Lark & Sparrow with reworked vintage. By making alterations like replacing buttons and shortening the hem, the garments are made to look “less costume-y, more ‘transcending time,’” Hillard said.

The other brands that populate the racks in the minimalistic, whimsical space are predominantly smaller, U.S.-based designers. “They’re not big labels,” she said. “They’re people who are starting in the industry, or put more money into the quality of the garment as opposed to marketing and publicity.”

When Hillard opened her business, it was one of a kind. “It was a bit of a risk because there wasn’t anything here,” she said. The neighbourhood-based business appealed strongly to her sense of community, which Hillard believes contributes to her boutique’s success. For instance, she knows her clientele by name.

“I know what you bought for the last six months. I’m going to give [a client] a call when a blazer comes in that works with the t-shirt and jeans she bought last month,” she said.

The integration of Forever 21, H&M, and other fast-fashion retailers in the city did steal a portion of her younger clientele, she admits. However, Lark & Sparrow brings a quality and uniqueness to the clothing that “throw-away fashion” pieces lack, and manages to keep a price point of under $100. “When we get a cut of six things, that’s it. You’re never going to see it again. That’s something we’ve always done from the very beginning, and we will stick with, always.”

“Where I think it’s bad is when local, smaller communities feel threatened by it. It’s not a threat; it’s a different market,” she said. She compares the boutique experience to McDonalds and fine dining. McDonalds will always provide the quick, inexpensive burger, but will never replace the experience of eating at a fine dining establishment.

“I’m an artist—I like to express myself through my clothing, my art, and my business,” Hillard said.