Let us not direct our anger towards survivors after papal visit

All survivors’ reactions to Pope’s apology are valid 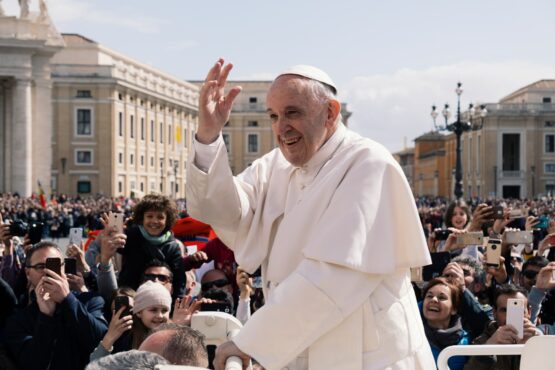 The Pope, photo by Ashwin Vaswani via Unsplash.

On July 24, Pope Francis finally arrived in Canada to issue an official apology to Indigenous people. Even before he came, the visit has been rife with controversy and full of disagreement.

From headdresses to ignored doctrines, there has been plenty about his visit for people to be upset about. Not even a month after the Pope’s visit, an extremely prominent cardinal from Quebec, Marc Ouellet, was named in an investigation into sexual misconduct in the church. Ouellet accompanied the Pope this July on his visit.

Though he arrived on the 24th, the Pope did not speak publicly until the next day when he was in Maskwacis, Alberta at a previous residential school location. The gathering began with a grand entry of chiefs, and a welcome from Chief Wilton Littlechild. In Maskwacis, the Pope, in front a crowd of politicians, survivors, and delegates, finally issued an official apology on Indigenous land.

“Today I am here, in this land that, along with its ancient memories, preserves the scars of still open wounds. I am here because the first step of my penitential pilgrimage among you is that of again asking forgiveness, of telling you once more that I am deeply sorry.”

When the Pope finished his apology, a transcript of which can be found online, Chief Wilton Littlechild and other community members, presented the Pope with a headdress. Many people had a problem with this gift. A nehiyâw singer reprimanded the Pope directly after to the tune of “O Canada,” and crowd members can be heard screaming things such as “you’re a snake,” and “repudiate the doctrine of discovery,” with many more tweeting during and after the event.

Chief Littlechild faced a great deal of online hate for this action, though some came to his defense, like Indigenous reporter Brandi Morin.

“I remind people who are attacking Chief Wilton Littlechild, former Truth and Reconciliation Commissioner & residential school survivor for gifting Pope Francis with a headdress- he is a survivor who has been through trauma & is being ambushed with hate- he is a survivor already,” Morin tweeted.

Morin had the opportunity to briefly interview Littlechild on the hate he has since received. In the brief interview, Littlechild says that because his community was chosen for the visit, the community decided “in our tradition, we should offer a gift, and usually a person of his stature of honour, we present a headdress.”

From Maskwacis, Pope Francis held a mass in Edmonton at the Commonwealth Stadium on July 26. During his homily, the Pope focussed on not forgetting history, but moving forward in a good way, and creating a just society. The Pope then joined the annual Lac St. Anne pilgrimage, where he focussed on the power of water both to Indigenous people and Christians, as well as the importance of Indigenous women in community.

On the 28th, the Pope was in Quebec City where he held another holy mass. This mass was the site of a silent protest, where two activists, Sarain Fox and her cousin Chelsea Brunelle, went to the altar and unfurled a banner that read “rescind the doctrine.” Despite repeated calls, the doctrine of discovery was not referenced in the second homily either.

The next day, the Pope travelled to Iqaluit, where he again publicly apologized, and met with children and residential school survivors, before getting on a flight back to the Vatican.

It was not until the plane ride back that the Pope addressed this key issue. Ka’nhehsí:io Deer asked the Pope about the doctrine in a press conference on the plane back to Rome, and, though he didn’t talk of rescinding it, he did say it is bad.

The Pope also acknowledged that the actions against Indigenous people by the church were genocide in response to another reporter’s question.

A visit of this level is extremely complex, and of course is going to have very different reactions and feelings from people. But every viewpoint coming from survivors is valid and right. For some, the papal visit meant a great deal, as was evident from the many times that the CBC camera operators zoomed in on weeping Elders during the apologies.

But for some survivors, it brought up a great deal of religious and other trauma and only left them with anger. That, too, is a correct viewpoint. Let us not direct our anger towards survivors like Chief Littlechild, but to the institutions that continue to operate on the backs of marginalized people.

Let us take our energy and not squabble amongst ourselves but direct it towards attaining true justice. An apology is a first step, and there is still a great deal of work to do.