Lilia Zaharieva suits up for her next fight 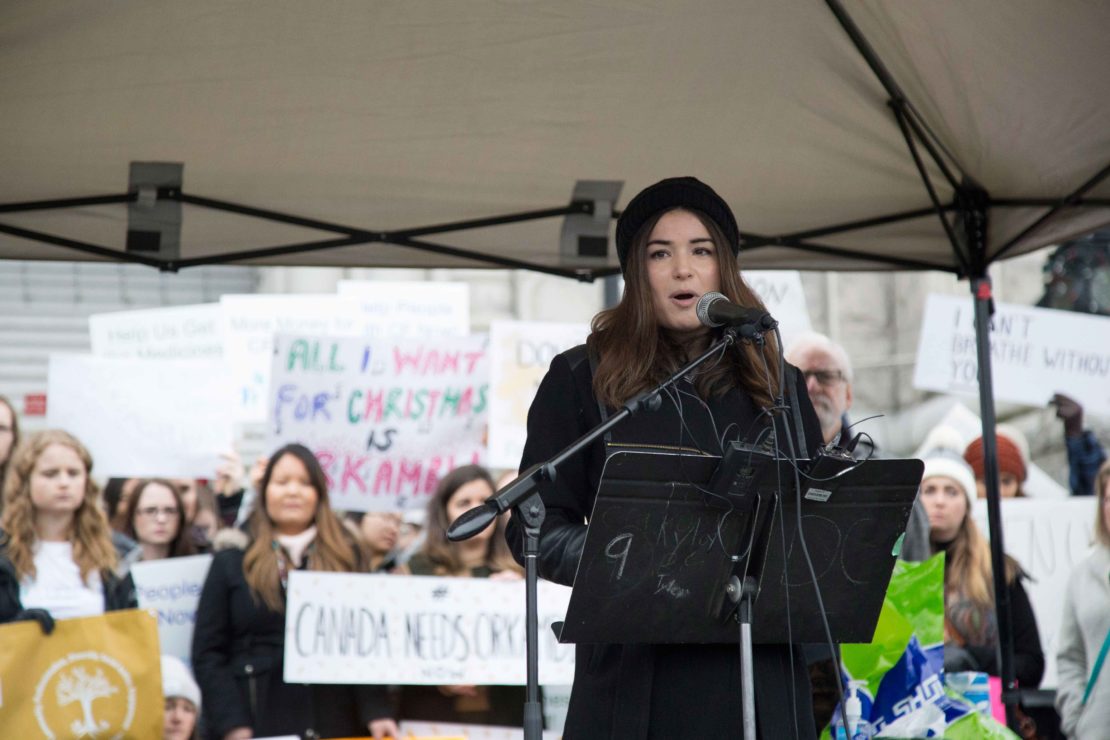 Lilia Zaharieva speaking at a rally at the B.C. Legislature in December. Photo by Belle White, Photo Editor

After a year of campaigning, petitioning, and lobbying, UVic student Lilia Zaharieva has taken the next step against the provincial and federal governments in the hopes of improving accessibility of medicine for Canadians with cystic fibrosis (CF).

On the afternoon of July 24, Zaharieva joined a $60-million class-action lawsuit against the provincial and federal governments and the Canadian Agency for Drugs and Technologies of Health (CADTH).

Led by Chris MacLeod, a Toronto lawyer who also lives with CF, the lawsuit aims to injunct the CADTH review process, currently set to conclude at the end of the summer. The review process, conducted by both CADTH and the provincial government separately, functions as the official recommendation as to whether Orkambi, a drug that treats CF, is an effective drug. In the past,  Orkambi has not passed the review , and  the injunction hopes to change that.

Along with tackling the review process, MacLeod and Zaharieva are suing for $60 million in damages, representing all CF patients in Canada who may have otherwise accessed Orkambi.

Along with tackling the review process, MacLeod and Zaharieva are suing for $60 million in damages, representing all CF patients in Canada who may have otherwise accessed Orkambi.

According to the Times Colonist, the Health Ministry declined to comment on any specifics with the case before the courts.

Zaharieva can personally attest to the positive effects of Orkambi. Since receiving a compassionate care supply of the drug from manufacturer Vertex in March 2018, Zaharieva says her day-to-day life has changed.

“I finally am settling into life,” she says, “and I’m out of survival mode.”

She continues to gain back her health and strength with each day, but Zaharieva could lose the medication at any point. When they granted her the supply, Vertex stated that they don’t plan to discontinue Zaharieva’s supply. As is the case with their compassionate use program, however, it is within their discretion to do so at any time.

In addition to the injunction of the review, the lawsuit aims to expose CADTH as a biased organization. CADTH works as an advisory to all Canadian health-care decision makers, claiming to work solely off of evidence, remaining uninfluenced by outside forces. But because CADTH isn’t a government organization, there is no access to Freedom of Information requests and a very limited appeal process.

“We want to uncover that CADTH is in fact acting as a government organization, in violation of the Charter of Rights and Freedoms,” Zaharieva says.

“We’re acknowledging that it’s a marathon, not a sprint,” Zaharieva says. “I am nervous.”

With MacLeod, Zaharieva is ready for a long road of fight ahead.

“We’re acknowledging that it’s a marathon, not a sprint,” Zaharieva says. “I am nervous. I am naturally a very private person, and suddenly I’ve been thrust into being the main plaintiff, representing all British Columbians with the Delta F508 gene mutation. It’s a lot, but it’s the right thing to do.”

On the afternoon of Tuesday, July 24, Zaharieva travelled to Vancouver to file the lawsuit. Having previously asked for support from others living with CF in the area, Zaharieva was shocked to see that a young woman came straight from St. Paul’s Hospital, with her medical bracelet and mask, to support Zaharieva in her mission.

“It was a sobering experience to see Chris and I, both currently on life-saving drugs, walking without great effort and speaking to the press, while there is a living example of how the lack of medicine can affect someone in the room.”

Zaharieva recalls her emotions running high during the encounter.

“I’m watching her cry, and she’s there to be my strength,” she says. “My past is her present. This is exactly why I’m doing what I’m doing.”