As part of her platform announced today, Mayoral candidate Lisa Helps has suggested reducing the standard speed limit to 30 km/h from the current 50 km/h 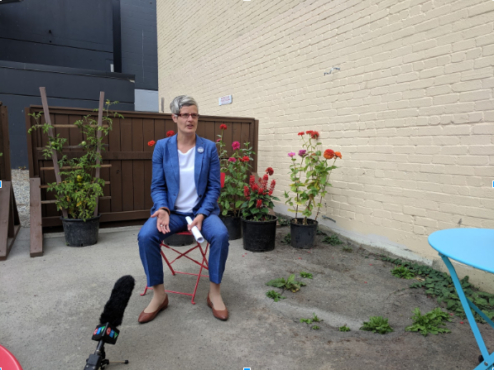 The first is a proposal to lower speed limits for local neighbourhood streets to 30 km/h from the current 50 km/h. The second proposal, Helps said, is to expand the city’s current garden suite program so that larger suites will be able to be built on larger lots, allowing more housing for families.

The decisions stem from Helps’ “Kitchen Table Talks” — small-scale meetings that Helps attends that are hosted by local residents to discuss a variety of issues that concern them.

The Mayor also announced she will be releasing a detailed four-year plan in the next coming weeks, with more information about platform objectives.

“It’s really exciting to have heard from Victorians what they need for the future of their city, and to have an opportunity for the next four years to work alongside the community to deliver that,” Helps told the media at her campaign headquarters. “So these two elements that we’re releasing today are emblematic of more to come.”

However, it’s not all about taking it slow. Most streets commonly used for transportation rather than local traffic should remain unchanged, or, in the case of heavily utilised roads like Douglas or Blanshard (streets that lead out of downtown and onto highways), possibly get increased speed limits.

Helps also stated that she absolutely plans to consult people in the transportation sector and those who otherwise drive for a living as the plan moves forward. She also emphasized her commitment to consulting with the public, including Parent Action Committees and neighbourhood groups (groups that Helps said are all concerned about accidents), and plans to use tactical enforcement and a rigorous educational campaign to allow a smooth transition if speed limits change.

“There’ll also be data, so speed readers, and measuring. I’d prefer to have no accidents, and have heard of no accidents,” Helps said.

In a phone interview with The Martlet, Mike Geoghegan, former candidate for Saanich District Council and current candidate for Victoria Mayor, called the move to change speed limits “completely ridiculous.”

“The standard speed limit should remain at 50km/h, with the obvious exceptions being those particularly narrow or windy roads,” Geoghegan said, suggesting that Helps’s statement on her commitment to road safety “is the cover for what’s just another attempt to reach into the pockets of the driving public.”

“What’s next? Do you wanna go back to 100 years ago when you had to have someone running ahead of your vehicle waving a red flag?” he asked.

Victoria residents will be able to cast their vote for Mayor and Council positions, as well as answer a referendum question on amalgamation, on Oct. 20.