A collection of people from the local community donated time to tell their stories last month. On Saturday, November 3, the Greater Victoria Public Library (GVPL) and the Art Gallery of Greater Victoria (AGGV) partnered to launch their first ever Human Library Project. Victoria has held the event before, in fact UVic held one in 2010, but this was the first time for the GVPL.

The Human Library Project was initiated in 2000 in Denmark by the youth organization Stop The Violence. That first event comprised 75 “living books,” featuring people from various cultures and professions who had volunteered to share their stories with others. Since then, the Human Library Project has taken place in various cities around the globe. 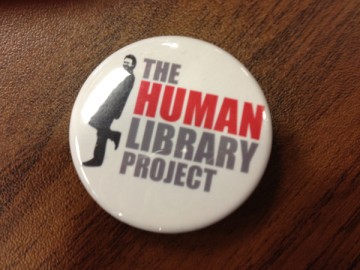 In the foyer of the Greater Victoria Public Library, 11 living books were on display. “We wanted to get a cross-section of all the people you would see in Victoria, so we tried to get an array of volunteers from all different jobs to be our living books,” says Jennifer Rowan, one of the event coordinators. Each living book had a unique story to recount ­– from the submariner who fought during WWII to the monk trying to navigate city life – and anyone was welcome to hear the story.

Each volunteer offered two or three 30-minute time slots for “readers” to sign up. The readers then asked the living books questions about their lives, based on what they wanted to know.

Robert Zacharias, a community liaison for BC Transit, was selected as a living book. Zacharias explains that as a bus driver you think in terms of a rigid schedule. “Sometimes you’re shaving seconds, and you have to get that door closed the minute [the passenger’s] butt’s out the door.” After nearly 15 years as a bus driver, many of the routes have become second nature to him. “I’ll be driving my truck and realize I’m driving on a bus route, even though it’s so much slower than just going directly [to my destination],” he says. His role as a liaison means that when a bus or bus driver is needed for a charity or special event he gets to take part in it – like when he acted as tour guide for mayors during a B.C. municipal convention, or when he was chosen to play a bus driver in a few scenes of the made-for-TV movie Fat Like Me.

During the three-hour event the 11 living books at the library participated in 26 conversations, and every time slot was filled. Rowan feels that the event “helped show the library as more than just a place to borrow books, but as a gathering place, outside of work and home, where people can get together.” Based on the positive responses from both the living books and the readers, Rowan hopes they will be able to hold another Human Library Project in the spring of 2013. “It allows for people to have conversations with people they may not otherwise ever talk to, and celebrates the diversity that exists in this community,” she says.