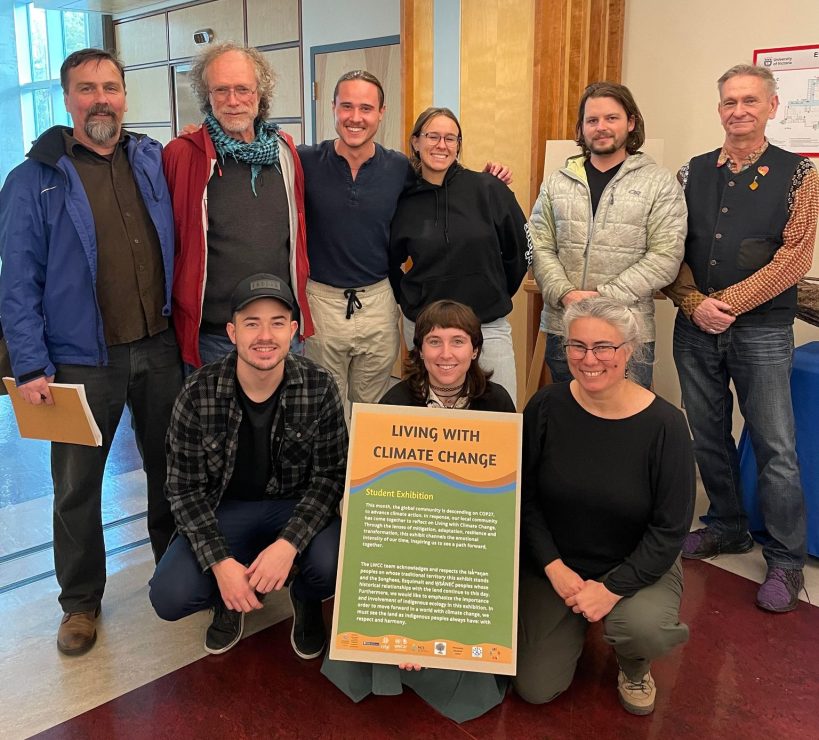 Resilience. Mitigation. Adaptation. Transformation. Hope. These are all words connected with the Living with Climate Change student-led events series that happened on campus this fall.

The Living with Climate Change series included multiple workshops and conversations centering around climate change in October and November. Its goal was to promote the various ways students and community members can connect and support one another in the face of climate anxiety.

The UVic students responsible for the organization and creation of this series are Pearce Jones, Savannah Barratt, Jaden Jeske, and Jade Chicorelli.

After learning that the UVic library had some additional funding in their community engagement fund, the group decided they wanted to take action against climate change instead of just talking about it.

The process of creating this series started back in the summer when it was originally planned to just be a short event on climate change.

“Pearce and I sat down and we were like, ‘let’s do a three day living with climate change intervention, because a lot of it is theoretical and academic based,’” said Chicorelli, one of the team organizers. “And we were like, ‘how can we integrate community and students, and then professors and different people’ … and it ended up being not just a three day thing, but almost a three month thing with multiple events.”

“We walked around Finnerty Gardens, and we had everybody kind of get into a mind and body zone,” said Chicorelli. “And then we went and played with physical arts. We had paintings and drawings, and we just talked about getting into your thoughts and feelings in an artistic way that a lot of people don’t get to do.”

Following this exercise, the group displayed these artistic responses from students in an exhibition on the main floor of the McPherson Library, an event that will run until Nov. 30.

Other events included a climate art bazaar and luncheon that happened in mid-November, where students were encouraged to engage in multi-faceted events, such as litter installations and graffiti boards. Students could collaboratively create art and discuss issues such as the impacts of fast fashion on the climate.

On Nov. 19 , the group organized a roundtable cafe, which included interactive activities involving students, faculty, and the community in which topics of adaptation , resilience, and mitigation were explored.

Chicorelli’s favourite event from the series was the roundtable cafe.

“It [was] kind of like our speed dating, climate change, conversation space,” she said. “We [had] groups of three which [included] a student, a community member, and a knowledge holder at each table, and people rotated through topics of mitigation, adaptation, resilience, transformation, and motivation.”

The final event of the series included a field trip that took place right after the roundtable cafe, in an effort to do some hands-on work and gain a different perspective on how to live with climate change. The field trip took place at SṈIDȻEȽ (Tod Inlet), on the traditional territory of the WSÁNEĆ peoples, in order to help do some restoration work.

According to their website, the SṈIDȻEȽ Resiliency Project is all about “taking the time to connect to the landscape and uncover the layers of stories the land holds.” They host community and student groups willing to complete and support ecological and cultural restoration

“It took us a while to figure out where we wanted to go,” said Chicorelli. “It’s a really important historical place and [an important place for] people reconnecting with their actual physical landscape. I think it’s a really good way to build place attachment and put work into [restoration].”

In reflecting on this series, Chicorelli said that climate change is ultimately like living with bad roommates.

“We have to live with them and their changes and we have to support each other outside of the roommate circle to find solutions and deal with that relationship changing. [Both] make us incredibly anxious. It’s something we deal with every day,” said Chicorelli.

“So we’re trying to make [the series] really personable and then hopefully there’s a legacy that comes from it. We’d like to see this [series] happen every year.”