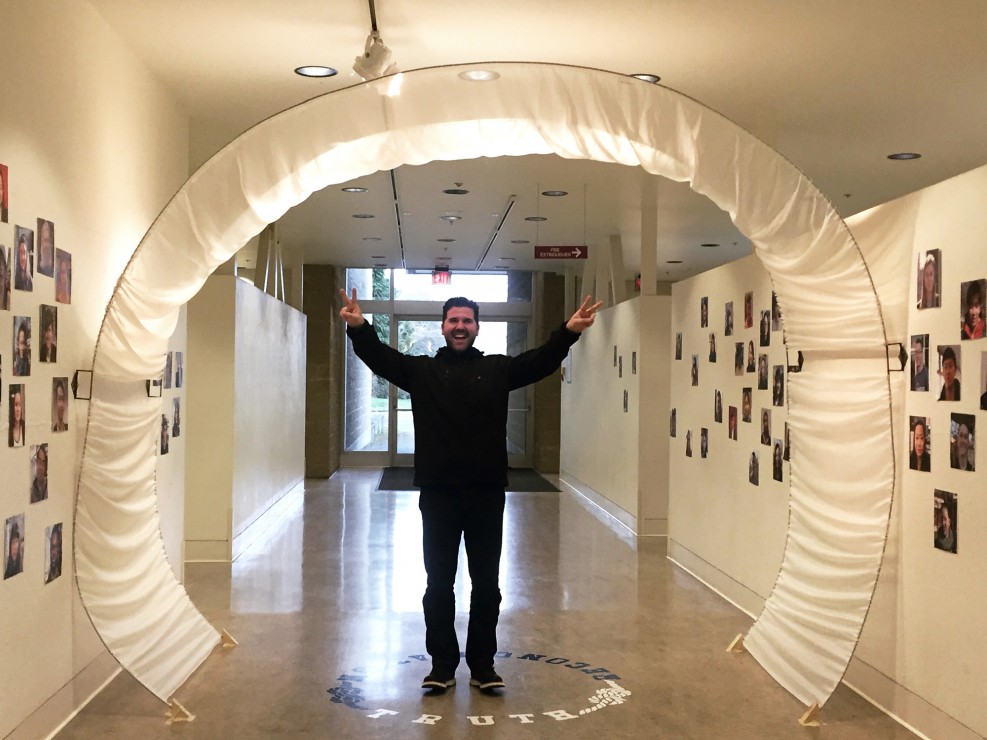 Rande Cook, pictured during his class, showing off an art installation dedicated to the Truth and Reconciliation Act. Photo provided

UVic will soon be home to a towering sculpture, carved from cedar, honouring murdered and missing indigenous women. The Martlet spoke with its sculptor, Rande Cook, about raising awareness of indigenous issues in Canada, and the role of art in society.

“It’s our voice,” Cook says. “It’s important to create from a place that [encourages] awareness . . . to help create a better world.”

Cook is currently the Audain Professor of Contemporary Art Practice of the Pacific Northwest, a position established by UVic in 2009 to bring distinguished practicing artists to teach in UVic’s Department of Visual Arts.

Cook began teaching a semester-long Visual Art class in January centered around his personally-funded sculpture, which he plans to donate to the university. The piece will stand 12 to 15 feet tall, and will be sculpted entirely from cedar.

“It’s going to be a free-standing woman . . . she’s going to be taking a step forward holding a feather in the air [as] a symbol of strength, empowering women,” Cook says. “I want it to overplay a dominant role in male society. I want the scale to be big.”

Cook says his work will have broader implications as well: “What does [it] mean when we talk about empowering women and how do [we] stand behind that and make it [our] truth?”

An internationally renowned freelance artist, Cook made the decision to create the sculpture without teaching in mind. He had previously designed panels in the Ceremonial Hall of the First Peoples House, so it was natural for him to approach UVic for a site to work on his new project in the summer of 2015. The university initially wavered on hosting the piece due to spatial concerns, but the Chair of Visual Arts, Paul Walde, eventually invited Cook to build the sculpture in the Visual Arts building — and to teach an entire class around its conceptual basis.

“I wanted [students] to learn about what [the issues surrounding] murdered and missing Indigenous women [are] and where we’re at with that in Canada,” says Cook.

Cook encourages his students to internalize political and social issues in a positive way, hoping they can harness their frustration to produce meaningful and provocative art. His class reflects upon the artist’s role in society while promoting a progressive social consciousness. Students watch Cook’s artistic process and engage with their own personal works.

Cook enjoys this dynamic, which positions him as both a professor and a peer. The class also explores how Canadian artists at large work to bring awareness to First Nations issues.

Aside from teaching, Cook’s many artistic avenues include painting, sculpting, furniture, and jewelry design. He even created a custom Converse shoe for A Tribe Called Red, the infamous Canadian trio who produce traditional drumming-infused electronic music. “I came up with a wolf spinning [records],” Cook laughs. “They were freaking out.”

For Cook, art is society’s inclusive voice, and he stresses the importance of inspiring Canada as a whole. “It’s not just about [indigenous] people, it’s about us as Canada,” he explains. His striving for national collectivity is expressed through departures from traditional Northwest First Nations art, as he melds contemporary trends with cultural tradition. “I’d rather be known as an artist than a First Nations artist because I don’t like that barrier,” he explains.

Cook’s sculpture for murdered and missing Indigenous women is part of a healing process that he hopes to share with all those struggling with unresolved, often unacknowledged, grief:

“A lot of families feel that still , that misplacement, and [it] affects their role in Canada,” says Cook, adding that he wants “to let the families know that the people that have passed have not been forgotten.”

Take a look at Cook’s work at randecook.com.