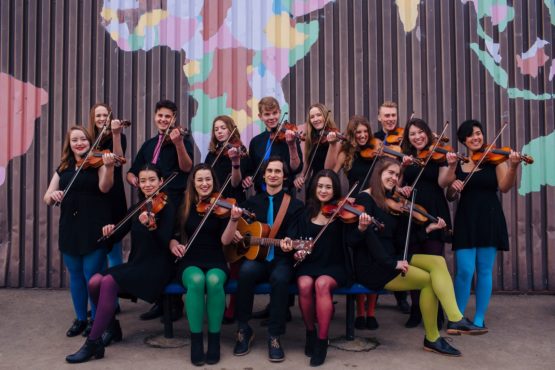 Coastline, the youth ensemble fundraising for a trip to Ireland. Provided photo by Ryan MacDonald

A two-time Canadian Folk Music Award–nominated group of local youth musicians have their sights set on Ireland, but they need community support to string it all together.

Coastline is a Victoria-based Celtic music group comprised of fiddle, cello, guitar, and piano players up to the age of 21. In addition to releasing two full-length albums since their creation in 2013, Coastline has performed at a variety of venues and festivals both internationally and across Canada — including Aberdeen International Youth Festival in Scotland, the Greater Victoria Performing Arts Festival, and the SingYourJoy Youth Chorus (where they sold out twice).

According their GoFundMe, the trip to Ireland will provide Coastline with opportunities to attend workshops, collaborate with musicians, and perform while revelling in the culture and traditions that shaped the music they play.

“Ireland is extremely important for both the type of music that Coastline plays and the culture surrounding fiddle,” said Dexter Hodgins, one of two UVic students among the 15-member ensemble alongside Emily Dubois. “Coastline doesn’t just play Irish fiddle music; we have tunes from all across the world in our repertoire and are always looking to add more.”

A longtime fiddler, Hodgins joined Coastline after graduating from the B.C. Fiddle Orchestra at the end of his senior year of high school. Hodgins said he decided to reach out to Ivonne Hernandez — Coastline’s group leader, a critically acclaimed fiddler and BCFO alumna — because he values the atmosphere and community present in fiddling groups.

“I’ve been in Coastline for almost a year and it’s been nothing but fantastic,” said Hodgins.

Hodgins traveled with Coastline earlier this year on his first trip with the group to perform a series of shows in Comox and Port Alberni.

“Everyone in the group is good friends with everyone else, so it was a lot of fun to travel with everyone,” said Hodgins. “Add playing fun gigs to travelling with good people and you’ve got a wonderful experience.”

The upcoming trip to Ireland will be pivotal not just for Hodgins — as both his first international show with Coastline and first time in the country — but also as a valuable immersive experience for the entire ensemble.

“Ireland has such a strong tradition surrounding fiddle music that this trip will be a fantastic learning experience for everyone in the group,” Hodgins said. “It will also be a great opportunity to learn some traditional and contemporary Irish music, as well as ‘show off’ the ever growing fiddle culture of Canada.”

Though they’ve been fundraising for flights and accommodations through various gigs and shows for months, Coastline plans to continue right up until they take off for Ireland on June 24. To help send them on their way, click here to donate to their GoFundMe.

With files from Cormac O’Brien