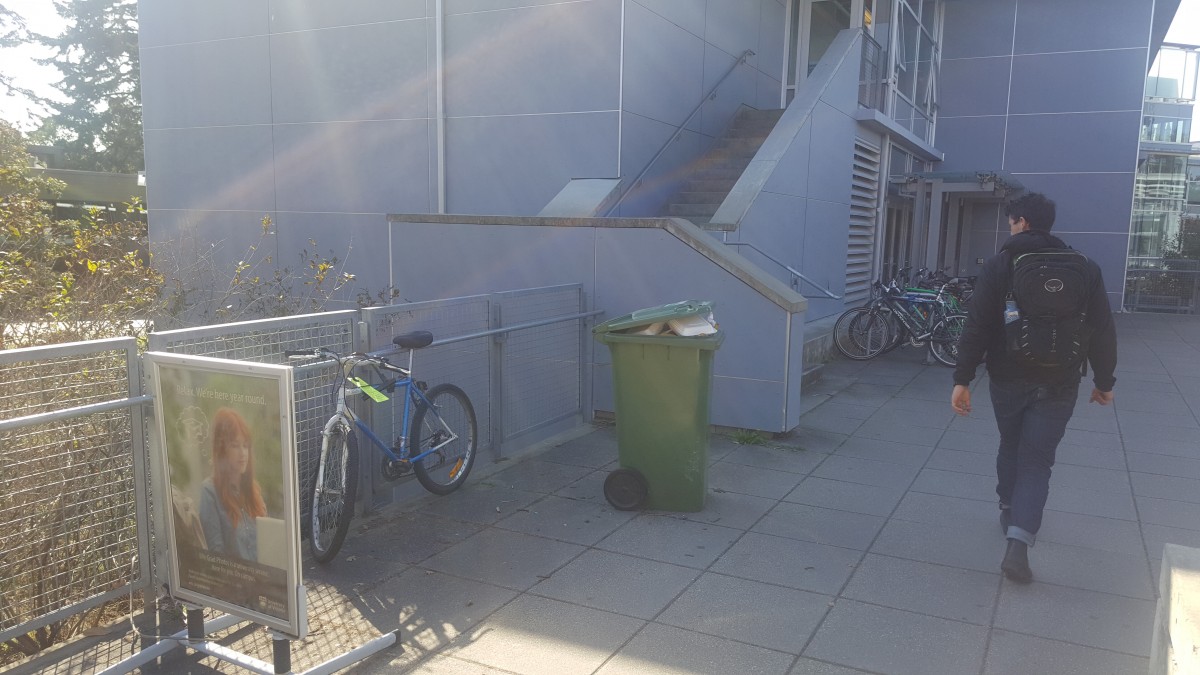 One student’s bike (pictured above) can be seen locked up against a railing at the David Turpin building. Attached to the lock is a warning from campus security, threatening impoundment. Photo by Julian Kolsut, Contributing Writer

UVic students face the threat of having their bikes impounded by campus security if they fail to secure them to designated bicycle racks on campus.

With the large amount of cyclist traffic at UVic, designated bike parking is often full at busy locations around campus. As a result, students are resorting to locking bikes against railings, trees, and other available stationary objects.

UVic’s traffic and parking regulations state bicycles can only be parked in bicycle racks, of which there are approximately 3 000 on campus, and that it is prohibited to secure bicycles to any tree, shrubbery, sign, or lamp post.

“The bike racks seem to get quite full, and people are resorting to going wherever they can,” says Tracey Proverbs, a Environmental Studies graduate student.

Patrick Seward, the parking and traffic manager at UVic Campus Security, stresses that the policy is vital for order and safety on campus.

Seward mentions facilities on campus such as the Campus Bike Center as a solution for storage issues.

In comparison, the city of Victoria has a more lenient policy, with vague bylaws prohibiting the obstruction of walkways and prohibiting damage to trees. Restrictions for cyclist parking are not specifically mentioned.

“I would judge that based on the amount of bike parking spaces we have here, it’s significantly more than the city of Victoria,” Seward says in response to this.

According to Seward, CARSA was one of campus security’s largest problem areas for bike parking in the past.

“That corridor between some of the playing fields and the main CARSA building last year was full of bikes . . . and that area is congested enough as it is,” Zanin says. “If cyclists want to be treated like cars on the road, then they have to park in a similar way.”

But some students, regardless of the risk, continue to lock up their bikes in unapproved spots. “I would lock it to a railing before going to the student bike center,” says Proverbs.

“We don’t want to cut people’s locks and impound their bikes, that’s not our desire. We will do it in cases of safety, we’ll also do it in cases where there is notification provided,” says Seward. “Our desire is to educate people.”

In the meantime, locked bikes will continue to receive warnings as some riders ignore, or are unaware of, UVic’s policy. With spring and summer around the corner, costs of parking and living in Victoria on the rise, and no sign of expanding bicycle parking in high-traffic areas on campus, the expected increase in bike traffic may continue to pose problems.

The question is, how many bikes is campus security willing to impound to deter students from parking in restricted areas?