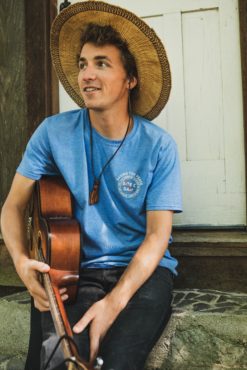 Folk musician and Salish Sea resident Luke Wallace will be stopping in Victoria on October 4 as part of his Fish First music and film tour.

In June 2018, Wallace travelled with his music equipment, film crew, and other artists-at-large to Bristol Bay, Alaska, to shoot footage that will be shared through his Fish First tour. Throughout the trip, Wallace and his team sought to catalyze a coming together over the fate of the most productive salmon fishery on earth in the face of a proposed mining project called Pebble Mine. If constructed, the mining project will be situated in the headwaters of the two largest rivers feeding into Bristol Bay.

Wallace has been an inspiring force across the Pacific Northwest and beyond with his music, and the efforts of his activism have been felt even here at UVic.

“Over my time educating in the Salish Sea, I’ve encountered Luke in so many different locations — around campfires, during activist paddles, in community halls, and in living rooms in the city,” says Ryan Hilperts, professor and undergraduate advisor in the UVic School of Environmental Studies.

Wallace’s recent venture to Alaska focused on inspiring people to rise up together for all that Bristol Bay holds dear, such as its salmon runs and its long-standing relationship with Alaska Native cultures.

“Everywhere I see him, he creates this magic about him.” Hilperts continues, “he can help lift a community that is sometimes focused on what we’re fighting against to come together to sing about what we are fighting for — what we love.”

Hilpert’s sentiment is echoed in the chorus of one of Wallace’s songs, titled “An Opportunity,” where he sings, “Rise up together, united we stand, to overgrow a system that threatens our land, with simple things like community, love and unity, turn this fight into an opportunity.”

Wallace’s recent venture to Alaska focused on inspiring people to rise up together for all that Bristol Bay holds dear, such as its salmon runs — the backbone of the region’s ecology — and its long-standing relationship with Alaska Native cultures.

According to the Environmental Protection Agency (EPA), the “Bristol Bay watershed in southwestern Alaska is the largest sockeye salmon fishery in the world, is home to 25 federally recognized tribal governments, and contains large mineral resources.”

The EPA also states that, “Alaska Native cultures have strong nutritional, cultural, social, and spiritual dependence on salmon, so changes in salmon fisheries are expected to affect the health and welfare of Alaska Native populations.”

However, the promise of wealth contained in the large mineral resources is what has attracted Vancouver-based Northern Dynasty Minerals Ltd. — a Pebble Mine project proponent — to the area.

The mining company’s proposal has been met with resistance by the locals of Bristol Bay. Of those who commented during the EPA’s Watershed Assessment, 1 204 residents (98%), told the EPA they wanted Bristol Bay to be protected from the mining project.

But Northern Dynasty claims the local economy will be boosted by the project.

Indeed, the salmon fishery at Bristol Bay has long served to boost the economy in the region.

Mobilizing people around saving salmon is one of Wallace’s personal mandates — he sees such mainstays of subsistence and culture as important sources for solidarity.

“The Bristol Bay watershed’s ecological resources generated nearly $480 million in direct economic expenditures and sales in 2009,” the EPA states, “and provided employment for over 14 000 full- and part-time workers.” 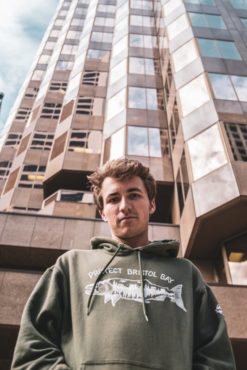 “The mine is literally directly in the headwaters of the two largest rivers that are feeding Bristol Bay,” Wallace explains. “And the real concern around it is that their tailings deposits are ridiculously close in proximity to those rivers.

“What happens in these ponds is once those sulfide rocks are exposed to air and oxygen they actually create acid, and so that acid leaches into the headwaters of these streams and decimates the salmon runs.”

Mobilizing people around saving salmon is one of Wallace’s personal mandates — he sees such mainstays of subsistence and culture as important sources for solidarity. On the second-to-last day of Wallace’s time in Bristol Bay, he and his team were invited by the Yup’ik Nation to learn how to filet and process some freshly-caught salmon.

“As an artist and organizer, I’m always looking for aspects within the movement or these sort of pillars that we can organize around,” Wallace says, “and salmon became a really clear one for me.”

When it comes to salmon, Bristol Bay is truly the world centre of sockeye runs. On average, the annual return of sockeye alone amounts to 37.5 million, according to the EPA.

Wallace became involved in activism through music after his first two years of university, which left him feeling powerless in the face of  the problems he was learning about — overfishing, ocean pollution, and climate change to name a few.

While controversies over environmental problems often work to polarize different opinion bases, Wallace has always kept an eye out for those central pillars that connect us beyond differences, such as salmon.

“We see every community, whether they’re settler communities — predominantly white communities — to Indigenous fisheries that have been around for ten thousand years, to urban chefs in Vancouver. It’s like everyone’s got these really amazing connections with salmon and they understand how foundational they are to coastal life,” Wallace says.

When it comes to salmon, Bristol Bay is truly the world centre of sockeye runs. On average, the annual return of sockeye alone amounts to 37.5 million, according to the EPA. To put that in perspective, the Bristol Bay Seafood Development Association claims that “if 38 million sockeye salmon were arranged nose-to-tail, they would stretch from Alaska to Australia and back.”

During his trip, Wallace did not just observe how the various communities of Bristol Bay connect to salmon; he sought to inspire these communities to connect with one another as well. The team ended their trip by organizing a potluck dinner and concert in Dillingham, a community near Bristol Bay. The king salmon — or Chinook — must have heard word of the party, as they chose that day to make their first appearance of the year.

“We got a dozen giant fish — like 30-pound, 40-pound king salmon and it was the first day they were running. They happened to show up and so we could eat fresh fish,” Wallace says.

Wallace is excited to be visiting Victoria and says he sees it as yet another opportunity for people to come together to celebrate the beauty of this majestic coastline.

“Everyone was just there, sitting on the shores, enjoying fish, enjoying music, and talking about Pebble Mine and the need to protect Bristol Bay.”

While the impressive salmon runs and sustainable fishery brought Wallace to Bristol Bay, he says that an equally important goal of the trip is engaging British Columbians in protecting what’s here in the Salish Sea.

“It’s on one level about raising awareness about the initiative around protecting fish in Bristol Bay, and the second is to use it as a model and really engage in conversations about how we can mirror what they’re doing in Alaska to better protect salmon in B.C.”

Wallace is excited to be visiting Victoria and says he sees it as yet another opportunity for people to come together to celebrate the beauty of this majestic coastline.

The film documenting his journey will be shown at the Victoria Events Centre on Oct. 4 at 7 p.m. and will be followed by the revolution-revving riffs Wallace is known for.