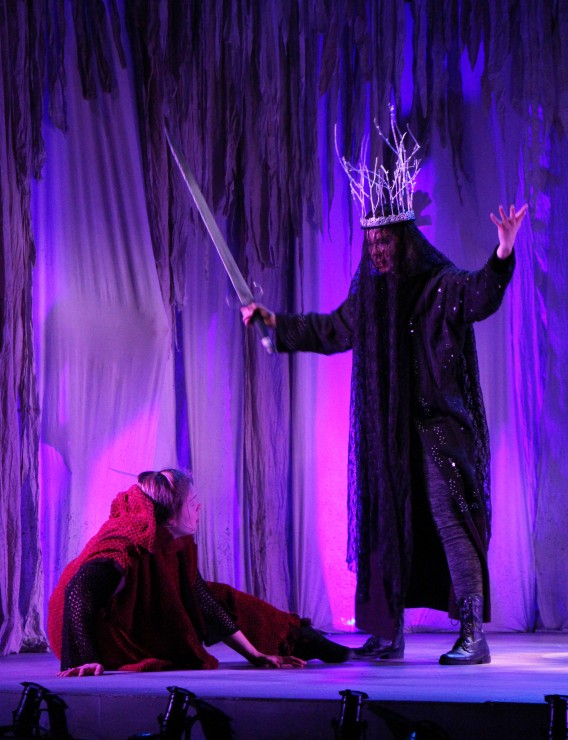 Blue Bridge Theatre’s run of The Scottish Play (Macbeth) is on now until May 17.
Photo by Laurin Kelsey

A crimson glow, flashes of lightning and scary shadows mark the eleventh century as actors travel back in time for Brian Richmond’s adaptation of the Scottish Play. Blue Bridge Theatre’s third production of its seventh season features a local cast and several UVic students. Most viewers will require no explanation of the famous Shakespearean tragedy.

My ears always take a while to adjust to the verse, and I found myself digging up memories of long-ago English classes to keep track of plot points, but that comes with the territory.

Lighting is an integral part of this adaptation, and makes for intense visuals. While the audience files in, the three witches (Iris MacGregor-Bannerman, Shauna Baird and Grace Vukovic) are already onstage dancing. As the story goes, nobleman Macbeth (Jacob Richmond) receives a prophecy that he will be King of Scotland. Lady Macbeth (Celine Stubel) convinces him to commit murder to make the prophecy come true, and the staging continues to be a strength throughout.

The black box set is lit from behind through a semi-circle curtain, with scenes and transitions embellished by a beautiful interplay of shadow and light. Duncan’s (MacGregor-Bannerman) murder scene, people mingling at a party, and delicate tree branches are all striking images. As apparitions haunt Macbeth, faces pressed into the fabric are definitely creepy. Another memorable visual is shirtless Macduff (Christopher Mackie) rising from the middle of the stage bathed in red light.

The red colour motif runs through the show, a reminder of blood, violence, and the theme of guilt. The highlight of the play comes after intermission when the witches gather around a cauldron to cast a spell. The entire stage is red, and the witches’ circling around the parachute that acts as bubbling liquid is entrancing.

Choreography is smooth and symmetrical — well-suited to the round stage. Some onstage costume changes lend a self-conscious nature to the production, but the result is not unenjoyable. The changes differentiate the three witches, who are double-cast as multiple smaller roles. Vukovic stands out as one of the few actors who manages to inject the Shakespearean speech with emotion and tension.

The supporting cast seems more on point than the leads. Stubel delivers a tight performance as Lady Macbeth, but her interpretation lacks the power and ruthlessness that typically makes the character compelling. Instead the orchestrator of Macbeth’s crimes comes across as hysterical and panicked.

On preview night, Richmond had a strong entrance as Macbeth, but some distracting stumbles on lines will hopefully work themselves out. Under his soliloquies, the vaguely New Age-sounding music feels at times goofy and melodramatic — an odd choice.

Director Richmond’s vision is clear, however, and the result is well-executed — every detail has been thought out. The two and a half hours (with intermission) pass easily. Shakespeare fans, and those who appreciate a wealth of local talent on one stage, will enjoy the adaptation.

Macbeth runs at Blue Bridge Theatre until May 17. Tickets are available at bluebridgetheatre.ca.