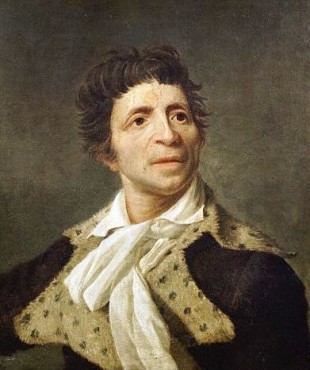 A re-enactment of the assassination of Jean-Paul Marat is the subject of Marat/Sade. Photo provided via Wikimedia Commons.

Marat/Sade, its full title The Persecution and Assassination of Jean-Paul Marat as Performed by the Inmates of the Asylum of Charenton Under the Direction of the Marquis de Sade, was first published in German in the ’60s. Translated into English in 1964, Marat/Sade was originally staged by British director Peter Brook in London. It was his provocative Royal Shakespeare Company production of the unique play that then brought it global attention.

As a play within a play, Marat/Sade is “a piece of entertainment that’s multiple-layered,” says Tait. It is set in an asylum in 1808 in post-revolution France, where the Marquis de Sade directs the inmates in a re-enactment of the assassination of Jean-Paul Marat. At the same time, the asylum actors in the Marquis de Sade’s production rail at the bourgeoisie of the 1808 audience. Through these events, playwright Peter Weiss aimed to criticize current events in the 60’s, particularly regarding Vietnam and Cuba.

Marat/Sade is written for a style of performance known as theatre of cruelty. This type of theatre’s purpose is to shock the audience in order to have them participate in the events happening on stage. In the case of Marat/Sade, audiences are provoked to share in the suffering and insanity that prevails among the asylum inmates in 1808. As Tait argues, theatre of cruelty creates a “more embodied reaction to the things that are presented on stage.”

Gabriel MacDonald, the Marquis de Sade of CCPA’s Marat/Sade, says in many plays today “audiences are spoon fed the message that they’re supposed to take away.” Marat/Sade “has a clear message but also leaves a lot to the individual audience member – what they want to take out of this.”Tait says that contemporary audiences could relate to this play “more so than ever before.”To his 21st century audience, Tait says, “I hope they will feel culpable and included in the attack” and “feel that they could be a part of the new revolution.” Dane Smit (CCPA’s Jean-Paul Marat) says the “most important thing to take away [from the play] is any application to real life setting.” Whether this be a personal revolution or a political one.