Fundraiser, GoFundMe are kicked off by hacks of all ages 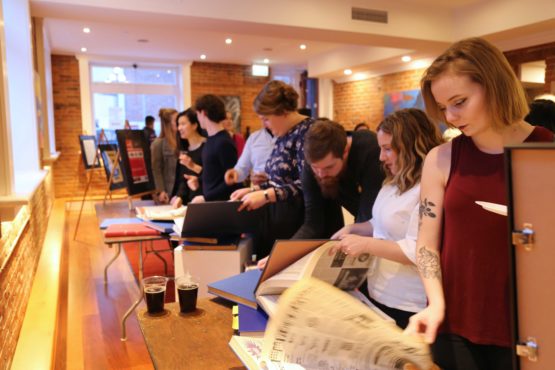 On the evening of March 23, the Martlet’s 70th Anniversary Gala saw the Temple Building in downtown Victoria filled with multiple generations of people united by shared experiences and a passion for student journalism.

Co-hosted by the Victoria Arts Council, the gala was organized to kick off the Martlet’s fundraiser to update and expand upon decade-old equipment. About 100 people attended the gala, representing a diverse range of alumni, contributors, and members of the Victoria community.

“I’m really impressed by the amount of people that showed up,” said Hugo Wong, former Editor-in-Chief of the Martlet from 2014 to 2015, and now a reporter with the Peninsula News Review. “The variety of people from years past — this is fantastic.”

Opening remarks for the event were made by David Leach, Writing Department Chair at UVic and self-declared Forrest Gump of the Martlet due to a decades-long relationship with the newspaper in various capacities. Leach’s speech echoed the common experience of many people involved with the Martlet over the years — what started out as a way to get free tickets altered the course of his life, as he attributes his career and marriage to his involvement with the newspaper.

The evening also featured speeches by Alisa Gordaneer, Co-Editor-in-Chief from 1991 to 1992, who now teaches journalism at Vancouver Island University and communications at Royal Roads University while she continues to freelance, and current co-Editors-in-Chief Cormac O’Brien and Melissa Faye Reid. A few impromptu words were given by Jim Bigsby, Managing Editor in 1962 and Editor-in-Chief in 1963, in addition to a cash donation slipped to O’Brien to help kick off the fundraiser.

“It’s really fun to see all these people that I’ve worked with over the years and still talk to now, and just celebrate this thing that we were all a part of — this big, weird, stressful but exciting thing”

Looking around the generations of Martleteers past and current, former Martlet Sports Editor and Editor-in-Chief David Karp found himself a part of an alumni network that’s been involved with the paper since at least the 1960s. “You feel both really old and really young,” said Karp, who wrote for the paper between 2004 and 2009, of being at the Gala. “When you’ve got 70 years of history, it’s definitely touched a lot of people in town.”

Some of the many influential Martlet alumni in attendance included Bryna Hallam, an editor with the Times Colonist who previously worked for the Globe and Mail and Journalists for Human Rights; Andrew MacLeod, current legislative bureau chief for the Tyee and former writer for Monday Magazine; and Sarah Petrescu, who did vital and powerful reporting on Victoria’s opioid crisis with the Times Colonist.

“I think the value of student journalism is the journalists it produces, and so to have a room full of those journalists tonight was really special,” said O’Brien after the gala. “It was absolutely worth the effort. It was a lot of fun.” 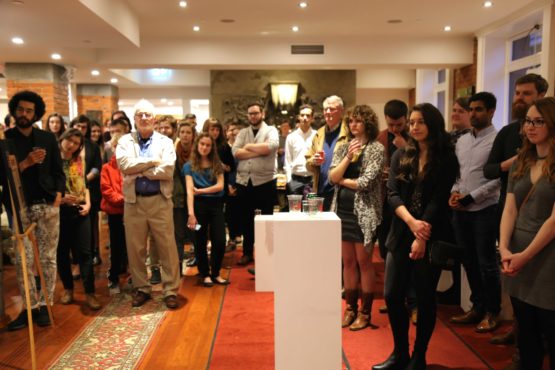 Pages from the Martlet archives were on display around the room, including framed prints of notable covers from each decade. For Charles La Vertu, Editor-in-Chief from 1964 to 1965, seeing the old covers evoked memories of Martlet exploits from years past.

He recalled that when Olivia Barr, the first female student society president elected at a co-ed Canadian university, gave birth during her time in office at UVic, the Martlet celebrated with a salute to her in front of the Student Union Building using a cannon La Vertu said they rented from Royal Roads (a military college at the time).

However, the exact historical details of this story were disputed throughout the night.

Former Martleteers also reminisced about their shared experiences and the things they had come to miss from their time at the student newspaper.

“It was a great experience,” said Shandi Shiach, Editor-in-Chief from 2013 to 2014. “I miss my team, I miss the work, I miss deadlines, the rush, news — I liked the novelty of becoming an expert in a new topic every day, every week.”

“One of the big perks of working for the Martlet was being part of this group that all collaborate together to do something really cool, and I’ve made a lot of really good friendships through that,” said Myles Sauer, Editor-in-Chief from 2015 to 2017. “It’s really fun to come out and see all these people that I’ve worked with over the years and still talk to now, and just celebrate this thing that we were all a part of—this big, weird, stressful but exciting thing.” 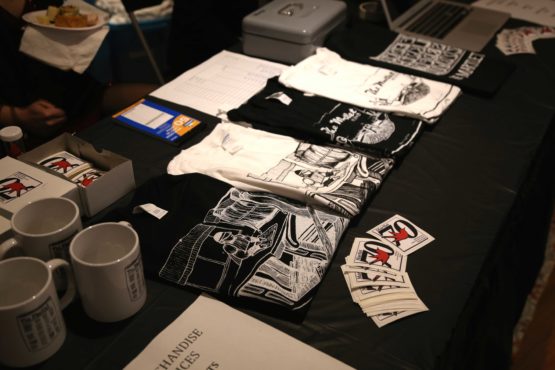 Photos of the merch on sale (and is still on sale now – email business@martlet.ca to place an order!). Photo by Belle White, Photo Editor

As long as students maintain a vested interest in holding UVic and its community accountable, Wong conveyed confidence that the Martlet will evolve through the current challenges of news digitalization. “It was so valuable for me and for hundreds, thousands of other people, and it would be so important that people thirty years down the line still have that.”

“I’m so impressed the Martlet has lasted for 70 years, it’s amazing,” said Gordaneer. “It’s one of the few publications that has that kind of history.”

If the Martlet makes it to its 100th anniversary, O’Brien hopes to see parties organized by alumni in cities across the country, which he said would serve to celebrate the impact the Martlet has had on journalists Canada-wide.

“I think the fact that we did have a full room of people who were so chatty, and it was such a lovely environment and a lovely atmosphere—I don’t think you would have gotten that with any other university club,” O’Brien said, reflecting on the night’s events as he drove back to his apartment. “I think that is a student newspaper—”

O’Brien paused, correcting himself. “I think that’s a Martlet thing.”

Correction: This article has been updated to reflect the fact that Bryna Hallam is an editor with the Times Colonist, not a reporter. We regret the error.

Please consider donating to the Martlet on GoFundMe.