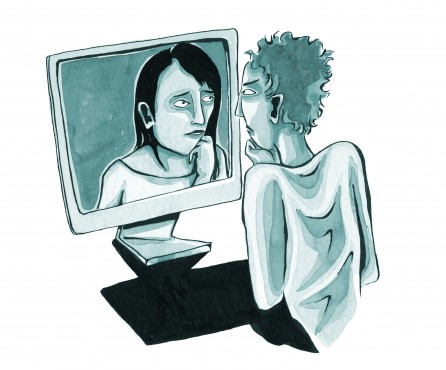 That is exactly what happened when I tried talking to Evie, the artificially intelligent Brit. She’s an avatar created by an artificial intelligence (A.I.) company called Existor. She is able to speak many languages and learns from the people she talks to. She stores this information in a database that she accesses when deciding how to respond. You may type or say things to her, and she will respond (eventually) in text and out loud in her robotic, British accent. Sounds pretty human, right? Not quite.

In addition to taking an abnormally long time to respond most of the time, her responses often don’t make sense with regards to the conversation, or she’ll get her words muddled. Case in point (and true story):

Me: Where is my Cat?

Evie: On the parking.

Me. You mean parking lot?

Now, couple the nonsensical remarks with the creepy facial expressions and you’ll start wondering how much you value your life. Evie was created as a facial avatar, so when you talk to her you are looking right at a face. She smiles, frowns, winks, shakes her head, nods, looks sad, blinks, and even scowls, but she rarely does the appropriate action in accordance to whatever it is you’re talking about. Rather, it seems her facial expressions and actions are random, making for an awkward interaction.

Our society is fascinated with the possibilities of A.I. and often portrays its desires and fears in pop culture with movies such as The Terminator and Her. The main purpose of creating A.I. is to have an expendable source of labor that does things a human can do without compensation. Samantha from Her is an incredibly useful A.I. who helps Theodore organize and retrieve things instantly from within his computer, but she becomes more valuable to him when they fall in love. So what does that really say about our fascination with A.I.? If you consider just about any movie about A.I., the core idea, more often than not, concerns how that A.I. relates to the other characters. John Connor tries to teach the Terminator how to say appropriately cool things like “Hasta la vista, baby.” Samantha wants to learn everything about humans. Sonny from I, Robot begins having dreams and feelings — both very human things to have. And David, the little boy robot from A.I.: Artificial Intelligence, just wants his human mother to love him as if he were a real child.

And then we have Evie, who has facial expressions and a lifelike voice but can barely hold a conversation. She isn’t quite on par with the A.I.s we see in pop culture, but she does embody a desire to create an A.I. that exists to provide interaction rather than provide labour. Evie is one more step on the path to creating an A.I. that will be indistinguishable from interacting with a person, and while this may seem scary, it might actually help us to better understand what it means to be human.