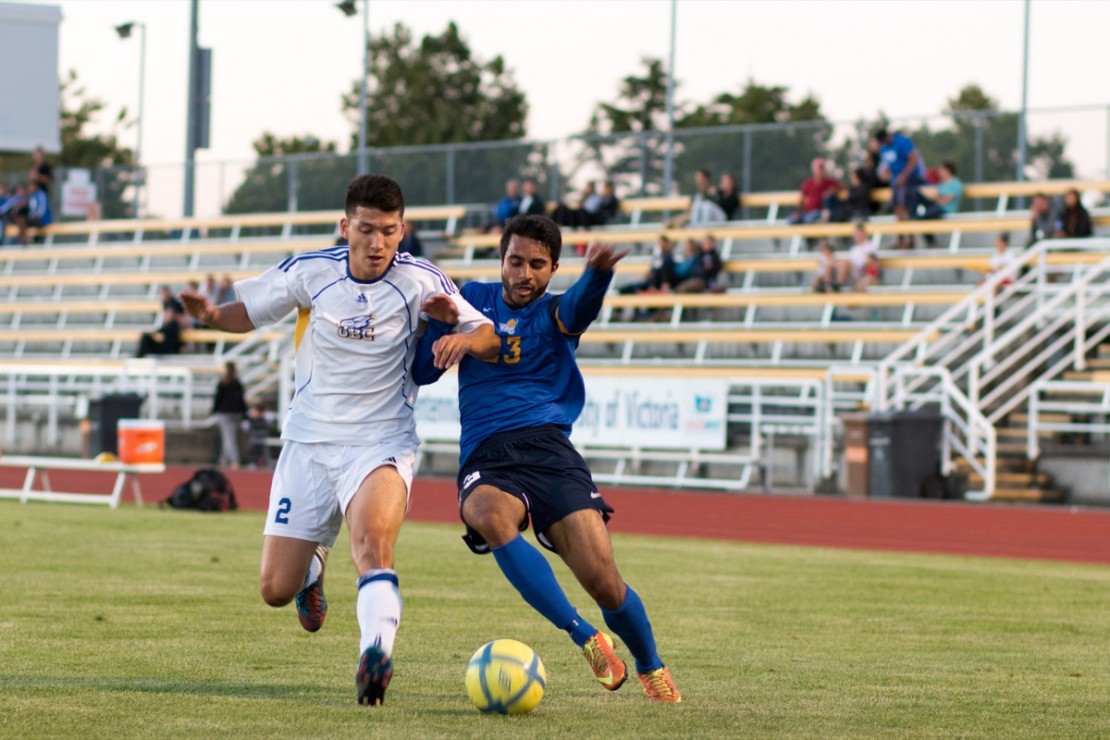 It was a hard-fought 90 minutes, but the Vikes men’s soccer team were defeated in the season opener by the UBC T-Birds by a score of 3-1. Despite an impressive number of fans watching the capper on UVic’s fifth annual ThunderFest, the applause could not carry the Vikes to victory against a UBC team that has won the CIS Men’s Championship for the last two years. The Vikes haven’t beaten the T-Birds since 2011—the same year (and the last year) they won the CIS Championship.

Thanks to ThunderFest, the crowd was in fine number and voice as the men’s soccer games began with an exhibition from the Victoria Skydiver’s Society. The crowd stayed vocal throughout most of the first half, despite a promising start from the T-Birds. Defender Rhyse Harnden managed to grab a consolation goal, but two goals from UBC’s Niall Cousens and one from Navid Mashinchi meant the Vikes are still looking for their first win.

Despite an impressive showing from the UBC front line (with forward Niall Cousens a constant thorn in the Vikes’ side), UVic competed well for most of the game. Veterans Craig Gorman and Cam Hundal were impressive throughout, while new additions Michael Baart and Justin Donaldson also produced fine performances, their speed and directness forcing the UBC defense to stay alert for the whole 90 minutes.

After a phenomenal fingertip save from goalkeeper Noah Pawlowski, the Vikes finally found their footing in the cagey and physical contest. However, Cousens found a yard of space in the box, took a lovely turn away from his defender, and slotted it home past the helpless Pawlowski.

The goal silenced the boisterous crowd, and the second half didn’t help them find their voice. UBC once again looked the more threatening side, with Pawlowski again coming to UVic’s rescue to keep the score at 1-0.

His efforts were in vain, however, as Sean Einarsson, impressive throughout, dispossessed Tarnvir Bhandal in the centre of midfield and found Milad Mehrabi with a through ball. Mehrabi clipped the ball into the middle of the box, where Navid Mashinchi made the game 2-0.

The game slowed down after the second goal, but the UVic faithful perked up after Rhyse Harnden’s headed finish in the 88th minute, which cut the deficit back to one.

The game was put to bed soon after, however, as Cousens lifted the ball over Pawlowski from 25 yards as UVic traded defensive players for offensive ones, pushing men forward to look for the equalizer.

It may be a discouraging start to UVIc’s campaign, but with plenty of positives to take from the game, Vikes fans may have more to cheer for this season.