For the first time since 1953, B.C. will have a minority government. As of midnight, May 9, the B.C. Liberal Party were projected to win 43 seats, with the B.C. NDP and B.C. Green Party following with 41 and 3, respectively.

A TWO-HORSE RACE FROM START TO FINISH

Once polls closed at 8 p.m., initial numbers tied the Liberals and NDP at three seats each, though the Liberals pulled ahead quickly thereafter. By 9:30 p.m., however, the Liberals and NDP were separated by only three ridings, sitting at 44 and 41 seats, respectively. This quickly shifted to 43 NDP seats and 42 for the Liberals: the Green Party shifted between zero and two seats for the majority of the evening.

By 9:30 p.m., Oak Bay-Gordon Head was the sole riding in the province that had not reported a single vote, with Elections B.C. citing a downed phone line as the culprit.

Both major party leaders on Vancouver Island retained their seats. At 9:54 p.m., it was announced NDP leader John Horgan would be re-elected in his riding of Langford-Juan de Fuca. At 10 p.m., the phone lines were cleared and Andrew Weaver was projected to hold on to his riding of Oak Bay-Gordon Head.

Even bigger was the news coming shortly after that Adam Olsen, Green Party MLA for Saanich North and the Islands, was elected in his riding, doubling the Green’s seat total from one to two.

The results only got more tense from there, with the Liberals and NDP staying neck and neck for much of the night. And with the Greens projected to win yet another seat, the possibility of a minority government looked more and more like a reality.

At 10:30 p.m., CTV Vancouver declared a minority government, but not for whom; both the NDP and Liberals held steady with a projected 42 seats each—two shy of the 44 required for a majority.

This steady stalemate suddenly flipped at 11:25 p.m., with the Liberals again projected to win a 44-seat majority government, with NDP following with 40. That number shifted to the projected 43, and by midnight, all reports pointed towards a minority government. Final results were unlikely to be announced that night—or even this week, pending absentee ballot counts in ridings like Courtenay-Comox.

This year’s voter turnout is up from 52 per cent in the 2013 provincial election, but just barely, at approximately 55 per cent.

Between April 29 and May 6, 614389 British Columbians (or, 19.5 per cent of eligible voters) took advantage of this election’s advanced polling, compared to the 366558 advance voters in the 2013 election. Over the past number of elections, demand for advanced polling has increased, demonstrating a growing desire for uninhibited voting—where and when voters want (rather than being limited to a single day).

This election saw 371 candidates vying for power—the Liberals and NDP each nominated 87 candidates while the Greens nominated 83, who ran alongside 79 candidates from 15 minor parties and 35 independents.

Unlike the mainland, the island ridings demonstrated an undisputed NDP trend, with their party claiming 10 seats, leaving three and one seats for the Greens and Liberals, respectively. Ten incumbents have retained their seats, including NDP leader John Horgan and Green leader Andrew Weaver. (At press time, it is unclear if Courtenay-Comox will swing NDP or Liberal.)

Like those before, this election cycle has not been immune from the popular rhetoric of “vote-splitting.”

“I think it’s vanity the major parties have that the voters for third parties really belong to them,” said professor emeritus at UVic Norman Ruff in an interview with the Tyee. The notion of vote-splitting risks overlooking voter crossover between the three parties, and considering why people vote for third parties. Green supporters are likely aware that their chosen party will not form government (at least in this election cycle), but are expressing support for ideas and values. During the 2015 federal election, the Green Party released a video to quell the “myth” of vote-splitting, saying that this does not consider the new Green voters who would not be voting at all otherwise, and assumes that all Green voters would support the same party as their contingency plan.
As of 10 p.m. on election night, the Liberals and NDP were tied at 42 seats apiece.

Yes, the three Green seats could have ensured an NDP win, but they could have done the same for the Liberals.

Rather than focusing on why Green supporters didn’t vote NDP or Liberal (and thus determine a clear victory for one party), the question remains as to why the Liberals have held the support of certain ridings for two or more decades. While many younger voters may not vote for the Liberals, the party is clearly doing something that other demographics favour. To ensure a more decisive victory in a future election, the NDP need to figure out how to better meet the needs of British Columbians in the northern and interior regions of the province.

With some votes yet to be counted, election results could switch and change over the coming weeks. Weaver refused to commit to joining a coalition with either party, reiterating that he was happy to compromise with either Horgan or Clark.

No party was ready to fully concede defeat or declare victory, and so the leaders’ speeches were largely filled with congratulatory platitudes.

Elections aren’t about the past,” said Clark, speaking to cheering supporters. “They’re not even about today. They’re about the future.”

For British Columbians waiting to hear the final results of this election, that future is a particularly uncertain one.

View the full riding results on Vancouver Island below (click for high-res): 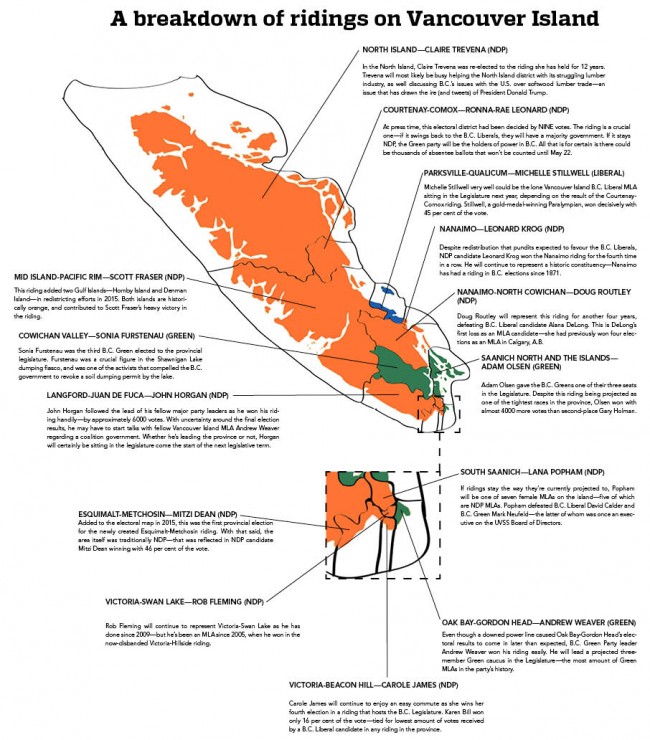