Feminism, self-reflection at the heart of Fawn Fritzen’s music 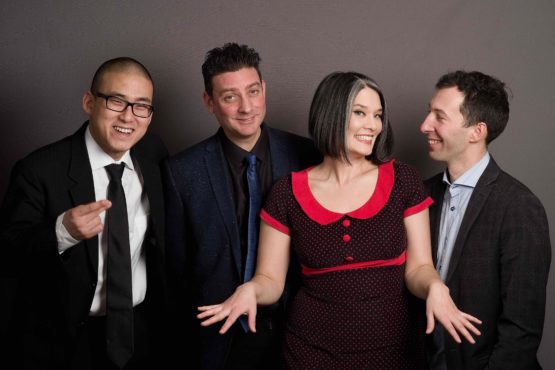 Feminism, introspection, and jazz — all elements intrinsic to the music of Fawn Fritzen, an artist from Whitehorse, Yukon making her Victoria debut this weekend.

Ahead of her shows in Victoria, Fritzen spoke to the Martlet about her influences, unique style, and perspective on the current jazz scene in Canada.

You’ve drawn aspects from not just jazz, but roots, gospel, and pop for your music. How would you describe your style?

I would describe my style as a fusion of my singer-songwriter roots with the jazz sensibility I’ve developed over the past decade. The lyrics aren’t fluffy, but they’re still relatable. The songs are co-written with jazz pianist and composer David Restivo, who is also my life partner. Being one of the country’s foremost jazz musicians, he provides sophistication to the melody and harmony, and creates a space for me to write lyrics deeper than I realized I could achieve.

What inspires and influences the type of music you create — particularly the recurring themes of feminism, failure, and human connection?

I’ve been singing professionally for close to 10 years, and having focused mainly on vocal jazz means I have spent a lot of time learning and loving the “Great American Songbook,” [which includes] songs that have been around in popular culture from the 1920s through the 1950s.

In the last three years, I’ve gone through some very rough waters. My marriage ended, and I had to come to terms with big mistakes I had made, figuring out why I made them and how to forgive myself. Failure is where we learn our biggest lessons. Some of my biggest lessons centred around consent and being safe to voice my needs, and that’s where feminism has really come in.

A year ago, I got to see Ivan Coyote perform live. They identify as non-binary, and their stories touched me deeply, and by the end of the show, I was vibrating with that sense that this is the kind of art we need to create real change in the world. These real, relatable, personal stories. So Ivan is a huge inspiration and influence.

What do you feel performing in four languages — English, Chinese, French, and German — brings to people’s experiences of your music?

I love performing in multiple languages! And audiences everywhere seem to enjoy it, too. There are always speakers of other languages in the audience. There are lots of French-speaking folks in our country who don’t get to hear enough French. And Chinese is a gift for everyone because you won’t hear that anywhere mainstream.

Since winning the Julian Award of Excellence for Emerging Jazz Artists in 2014, what new challenges and exciting endeavors have you taken on?

That award helped to get my name out across the country, and I’m so grateful to Peter Prentice and The Jazz Spectrum for creating the award. I put out my second studio album, Pairings, in 2016, working with some of the best musicians in the country. I got to travel to play in Ontario, Vancouver, and even Brazil, where I performed a song in Portuguese as well as an original tune I wrote (with French lyrics!) in a Brazilian style. But How to Say Sorry and Other Lessons, I feel, is the culmination of all the learning I’ve done both musically and personally since 2014.

What can listeners anticipate from How To Say Sorry and Other Lessons?

We debuted the show in Whitehorse on March 7, and many people wanted to talk to me afterwards about their own experiences relating to the situations I had described. To summarize from one audience member, [it’s] “two thirds toe-tapping and one-third wiping away tears.”

What’s next for you, after your current project and tour?

This current project is going to have a long life, I think. There are more songs and stories to create, and I can see it turning into a theatre piece. It taps directly into the conversations we need to be having right now in the wake of #MeToo, Brett Kavanaugh, Jian Gomeshi, #YesAllWomen, and all the rest of it.

As someone who has performed all across the country, how do you see the Canadian jazz scene in 2019?

There is so much great music being created all over the country! And there are some great treasures in terms of performance venues in surprising places. I know the musicians who come up to Whitehorse to perform are always blown away at the level of engagement and enthusiasm from our audiences. Sometimes it takes just a small group of enthusiasts to create an amazing local scene. I’ve never played in Victoria before, so I’m looking forward to discovering the legendary Hermann’s.

Tickets and further details on Fritzen’s shows in Victoria can be found on her website at http://fawnfritzen.com/shows.

This interview has been edited for clarity and style.