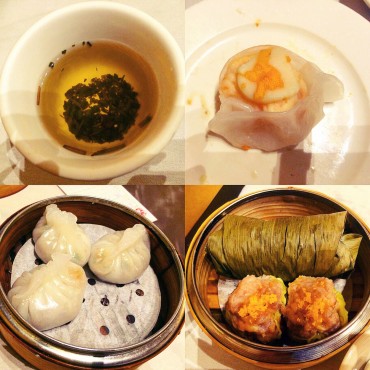 Standing in line behind girls in Lululemons and guys with beards, plaid, and toques is practically a city-wide pastime most mornings for Victorians. Like most people, I don’t like lines and I don’t like mornings so I hardly ever get up early enough to stand in one. But if I’m going to get up early and queue for brunch, there is only one thing I’m having: dim sum from Jade Fountain.

If you don’t know where Jade Fountain is, you may be forgiven; most people don’t think of it as the ‘it’ spot to eat dim sum on a Sunday morning. (Don’t go on Sunday though. Just don’t do it.) It’s in the basement of the Red Lion Hotel, next to Victoria’s only strip club (that’s how you know it’s really good). It’s always full of Chinese families and Asian exchange students sitting down to steamers full of hot dim sum classics. If you go on the weekend, the demographics get more diverse, but I rarely go on weekends (see above).

The Fountain is full of big, white, round tables topped with lazy susans; some wide booths tucked away against one wall; and small two-person tables filling the rest of the room. The decor is tacky China-for-Americans, by which I mean that you would never see it in China. Still, I find the windowless room oddly comforting: you could be anywhere in the world eating dim sum.

There are always tons of staff buzzing around with shiny metal carts layered with trays of egg tarts, Asian greens or pot stickers, and steaming hot teapots. First you get the all-important tea (it’s not yum cha without the cha), and the server leaves a little stamp sheet for your order. Unfortunately you don’t get to stamp it, but the waitstaff do as you select your food. Then they come to your table with the giant metal carts offering juicy shumai (shrimp and pork dumplings), gleaming cha siu bao (BBQ pork buns), neatly bundled lo mai gai (sticky rice wrapped in lotus leaves) and a variety of other luscious dim sum staples.

I inevitably get the same stuff, because once you find what you love, you can’t not have it: cha siu bao, shumai, lo mai gai, har gow, chiu chow (dumplings with pork, shrimp, and peanut). Everything comes to the table in little bamboo steamers, although I doubt they’re actually cooked in them. The food is, without exception, delicious. My personal recommen-dations are the shumai because they’re bigger than pretty much everyone else’s shumai in Victoria, and the chiu chow because I haven’t seen them on any other menus around the city.

As you grab your food, the waitstaff stamp your bill so you can see how much everything costs. It’s a tidy little system. They can’t fuck up your order and you have a visual representation of what you’ve bought; since orders are only taken in multiples, you should take some friends and split a single bill. That is, if your friends are cool enough to go to dim sum with you rather than to the diner down the street. If not, just take your worldly grandma. Take whomever you can get your hands on, and go soon. Just don’t go on the weekend.