My introduction to ultimate frisbee at UVic 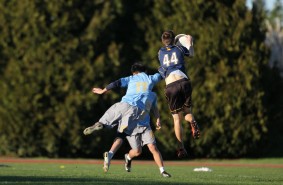 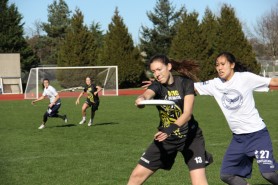 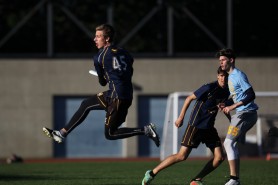 Ultimate frisbee, known simply as “ultimate,” is growing in popularity throughout North America, with USAultimate.org reporting that there has been a 49.2 per cent increase in memberships from 2009 to 2013. It’s one of the most popular activities at universities across Canada as well, and UVic is no exception. With that in mind, I headed to the Douglas Bowl, an annual ultimate game between the University of British Columbia Thunderbirds, and the University of Victoria teams, the UVixens and UVictims.

My goals were simple. Officially, I was to report on the games and the final scores. However, I was skeptical about ultimate as a ‘legitimate’ sport and had my own agenda for covering the games as well. Could the cynic in me be convinced?

No matter what the sport, a UVic vs. UBC game is always fun to watch, and with the UVixens (the women’s team) playing before the UVictims (the men’s team), the stage was set for a full day of exciting and energetic ultimate—whatever that was. As someone who had never watched a competitive ultimate game before, I wasn’t sure what to expect.

The rules of ultimate are simple: with each team attacking towards an end zone, the goal is to catch the Frisbee while standing in the end zone. The player holding the Frisbee is not allowed to move, but can throw—a simple premise that allows for some fascinating displays of athleticism.

I started my exploration of the sport by talking to various members on the ultimate teams, including UVixens captain Naomi Redmond and UVictims coach Luke Charlesworth. When I asked them to describe the game, they used words like “fast-paced,” “competitive,” “explosive,” and I even heard the description “fast, fun, and fucking sweet,” from rookie Josef S.

Frisbee jargon was being tossed around like a . . . well, you know—and even though this ultimate-inexperienced reporter didn’t recognize any of the technical terms or understand what they meant, they certainly sounded official.

The UVixens started the day off and it was a tight game, with neither team leading by any great margin. Both teams did well, especially considering the blustery conditions, and the game flowed nicely, often changing rapidly between attack and defence.

As I soon found out, ultimate is a sport that lends itself to “ooh” and “ahh” moments. Whether it’s a diving block, a spectacular catch, or even a well-constructed give-and-go, the game is decided by a succession of moments, each more exciting than the next. There were no better examples of that than in the first half, when captain Redmond sprawled to make a block on the edge of the UBC end zone, before making a defence-splitting run and catching the equalizing point before the end of the half.

Despite Redmond and UVic’s best efforts, they lost the game 15-10 following some dominating plays by UBC in the second half.

The Men’s game was up next, though the UVictims suffered the same fate as the UVixens, losing 14-11 to UBC. UVic kept close behind the T-Birds throughout the game, but they ran out of time before they could truly mount a comeback. The T-Birds could fly home happy—they had won both games.

While the games themselves were fun to watch, the most interesting thing I found was the officiating system. There were no referees— players in ultimate are expected to self-regulate the game and acknowledge their own fouls.

As a devout soccer fan, this was bizarre. How could a sport this friendly and amiable truly be recognized among other sports? Where was the animosity? Where was the hatred?

So while ultimate may be lacking in the hostility we usually associate with sports, it more than makes up for it with excitement and a feel-good atmosphere. Is ultimate a sport? I would say yes. If you want to offer your opinion on the validity of ultimate, go and watch a game.