Mycelium is the bee’s knees

In a battle for survival, bees have a secret weapon — mushrooms 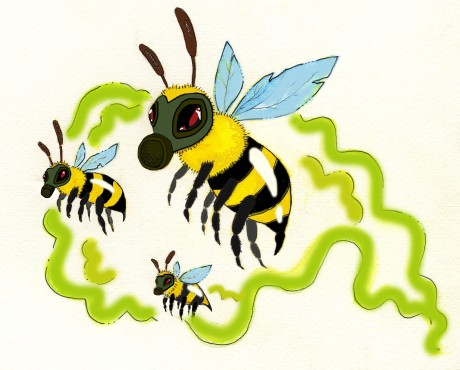 Think about your last meal. You can thank the bees for about a third of it. Seriously, I’m not pollen your leg — 30 per cent of the world’s crops rely on cross-pollination from bees and other pollinators, and 90 per cent of wild plants do, too.

“Without bees, we wouldn’t have enough food, simple as that,” says Barry Denluck, accredited Bee Minister in the Province of B.C. and beekeeper at the UVic Campus Community Garden.

“Bees are that one insect that we can nurture into the tens of thousands per colony to do volume pollination, to literally double and triple our food supply.”

But the number of bee deaths across the world has been waxing.

“Over the past decade, beekeepers have experienced a dramatic increase in annual colony losses, typically averaging well over 30 per cent,” begins a study by Paul Stamets and his team of scientists, released in the science journal Nature in early October 2018.

In the fall of 2016, seven species of yellow-faced bees were officially added to the United States’ endangered species list, and in August 2018, the rusty-patched bumblebee was added as well.

“Everyone loves bees because they’re really cute and fluffy and they are so important, but there’s so many other species that also depend on this network.”

Stamets et al.’s study puts the bulk of the blame on viruses and the parasitic mite known as the Varroa destructor, while another study by Jessica Rykken and her team, titled “Pollinators in Peril,” emphasizes climate change as a key contributing factor.

In April 2018, the European Union decided to ban a group of pesticides known as neonicotinoids upon reviewing a suite of scientific studies that have linked them to brain damage in bees, reduced immune defense and reproduction, and a phenomenon known as Colony Collapse Disorder (CCD), where the majority of worker bees suddenly disappear, leaving behind a silent and forsaken colony.

A team of environmental organizations — including the David Suzuki Foundation, Ecojustice, Friends of the Earth, and the Wilderness Committee — have been calling for Canada to follow suit and put a Canada-wide ban on this strain of insecticide.

Their case will receive a full hearing in the Federal Court sometime in November.

While scientists and environmental groups try to find ways to wage war on the many issues related to the bee crisis, the bees themselves are gearing up for their own battle to survive.

Stamets et al.’s 2018 study observes that bees have been accessing polypore mycelium — the subsurface network of polypore mushrooms — in order to boost their immune systems, giving them a fighting chance against mites and viruses.

“[Stamets and his team] found there was this whole range of immune-boosting compounds that the bees were getting from this mycelium.”

Paige Whitehead, UVic Microbiology and Environmental Studies student, and developer of the Nyoka light wand — the world’s first compostable, non-toxic glow stick — has been following Stamets’ work for years and is impressed at the new discovery by his team.

“It’s something that no one has ever really observed before, but Paul Stamets is the king of observing mushrooms and just seeing what’s happening in nature,” she says.

“[Stamets and his team] found there was this whole range of immune-boosting compounds that the bees were getting from this mycelium … they found that these bees were incredibly resilient and they had less Colony Collapse Disorder seen in those colonies.”

Whitehead has been working with Paul Stamets’ company, Fungi Perfecti, in order to give a new twist to her Nyoka glow sticks. The light wands now contain a Fungi Perfecti spore blend, which gets released into the environment, thus helping create more mycelial webs.

Whitehead says she is also excited by the new discovery because it provides an avenue for popular awareness of the importance and potential of mycelium.

“Everyone loves bees because they’re really cute and fluffy and they are so important, but there’s so many other species that also depend on this network,” she says, “and the bees are such a great way to start talking about the mycelial network’s effects on everything.”

For Denluck, however, there’s more to bees’ self-medication than mycelium.

This is just one addition to a list of elixirs that bees have been using for their suits of medicinal armor, he says.

Denluck has been observing bee behaviour in his role as beekeeper for over fifteen years.

The growing focus on bees is also an impetus for us to take better care of our planet.

Not only that, but bees choose the most potent medicine sources out there, which they are able do because of their acute capacity for detecting odours, Denluck says.

“The antennae of the honey bee is … 1000 times more sensitive than your or my nose is to smell. A dog is 10 times what we are and we know that they are way better sniffers, right? Well, a bee is another 100 times better than a dog.”

“If you watch a bee really close, they actually can articulate their antennas. It’s like they’re looking at their environment in 3D through pheromones.”

One of these other medicines that bees sniff out is the thin coating around the buds of plants, called propolis.

Because propolis is used by plants for their own protection against airborne pathogens, “it has an amazing antimicrobial, antibacterial, and antiviral property,” Denluck says.

“The bees actually go out and harvest this little bit of coating that is on new buds and they bring it back and they mix it with a little bit of honey or wax and they coat the inside of their colony with it.”

“[Bees] are well-known now as this canary in the coal mine for what our culture is doing to the planet.”

The propolis is then transformed into a buffer zone to keep viruses and bacteria out of the hive.

“It’s like an antiseptic welcome mat for foragers coming in to wipe their feet,” Denluck says.

But what if that welcome mat has an extra ingredient — neonicotinoid pesticide, for instance?

“If neonicotinoids are used for that particular plant as a [pest] control, it’s going to be in the water table. The plant will bring it in and the plant will have some of that in its nectar, in its pollen, in its propolis. The bees are carrying all of this back to the colony,” he says.

Denluck says there are more threats to bees than just neonicotinoids and mites — and they come from the beekeepers themselves.

“We feed them just plain old refined sugar, which has all the vitamins and minerals taken out of it,” he says.

To mediate this issue — something Denluck can actually control —  he has concocted a vitamin and mineral supplement program for his bees at UVic, replenishing the nutritional deficiencies of store-bought bee food.

“I can say that, visually, my bees look slightly larger than the average ones around Victoria. My bees fly in a slightly cooler, wetter environment. [They] have less mites…[and] less disease and pest problems,” he says.

“I’ve improved their health and wellness state to the point where they are better taking care of themselves.”

Whitehead says that the growing focus on bees is also an impetus for us to take better care of our planet.

“[Bees] are well-known now as this canary in the coal mine for what our culture is doing to the planet,” she says.

As the canaries continue to fall and the buzz of our cute and fluffy food providers becomes ever quieter, what will we do to make sure that the bees — and by extension humankind — will be here tomorrow?