Influences of psychedelia, funk, and 60s’ spatiality are as prevalent in today’s world of indie and electronica music as blues is to country or hard rock is to heavy metal. 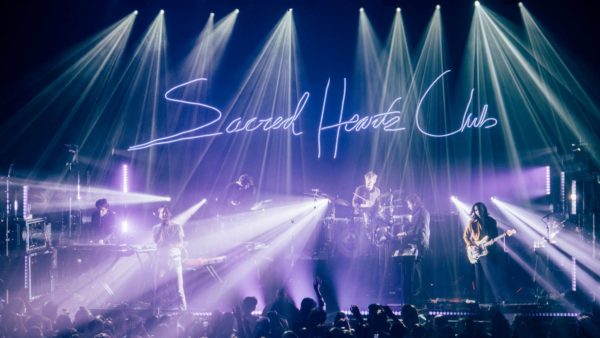 Foster the People’s efforts to shift their sound does little to impress the Martlet’s Maureen Chow. Photo via Facebook

Foster The People’s third album Sacred Hearts Club (SHC) is a clear realization of such influences. The band’s third album hints from its first impression that their return to the indie scene will include a newfound, polished shot at complexity through redefinition of their own style. Complete with a shot of all four band members underneath a fuschia overcast and neon lettering, the cover art is a far cry from the hand drawn doodles of their past.

But the Californian four-piece certainly isn’t setting any precedents by transitioning from indie-pop to electro-pop — even within the vast list of their fellow artists signed to their shared label, Columbia Records.

Unfortunately, by the end of a somewhat-slick, 41-minute-long, nightclub-speckled journey, their lack of originality pales in comparison to the larger issues at hand.

Production is easily one of Foster the People’s strengths — as proven by the band’s two previous albums — and SHC is undeniably both well-blended and delicately balanced. The bass lines alone in both “Sit Next to Me” and “Static Space Lover” feature remarkable presence without being overbearing, and instead bind everything together musically. Vocals by frontman Mark Foster are well pocketed, used sparingly but without being overlooked.

The primary concern, however, has to do with what’s being mixed as opposed to how.

Borrowing from hip-hop traditions, Sacred Hearts Club plays with hard trap beats, sampling, and spoken word that borders on rap. While brave attempts are often commendable in and of themselves, these experimentations are so far from refined that the lack of mastery becomes a distraction.

There’s also little to no reasonable explanation as to why this experimentation is included other than for the sake of fitting into a pro-EDM world — even then, the band is a bit behind on the trend. In addition to overwhelming the rest of the album, these musical choices hang a glaring question mark over the message SHC is putting out, and, subsequently, what type of musicians Foster the People want to be.

If they weren’t buried beneath a flurry of genre stereotypes and rather unfulfilling track titles, the lyrics and thematic material could have kept Sacred Hearts Club above the surface. Select tracks, for instance, “Loyal like Sid and Nancy” (referring to Sid Vicious, former bassist with the Sex Pistols and suspected murderer of his girlfriend, Nancy) offer gritty commentary on human nature and our own shortcomings.

“We all pretend one day we’ll be the greatest of the Gatsby’s / Growling mouths with rabies and loyal like Sid and Nancy,” is barely breathed out by lead singer Foster, but the recognition the song’s lyrics deserve is washed out by an emphasis on beats that feel like a desperate attempt to prove Foster the People’s departure from the band they once were.

Ironically, the best selections of the album may be the ones that are most reminiscent of the band’s debut album that paved their entrance into international recognition. While they’re far from masterpieces, “SHC” and “Sit Next to Me” certainly don’t shy away from a feel-good groove that reaps potential from a funk influence.

Hopefully, it’s a lesson learned: sometimes it’s best to stick to what you know. That way, if you’re Foster the People, at least it’ll be catchy.