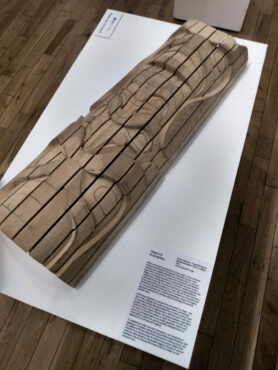 As viewers on Victoria’s Yates Street flee into the Legacy Art Gallery to escape the oppressive summer heat, they may feel as if they have been cocooned in a shaded forest, immersed in the sounds of forest canopy, the atmosphere filled with the winds and calls of woodpeckers. A panoramic print of lush greens and mossy barks wraps around the gallery entrance. The intense detail of the photographic print accentuates the textures so much so that they appear three-dimensional.

With the permission of Pachehaadt communities, upon whose unceded territory Eden Grove stands, Demers invited artists to live and work in cedarwood forests, a short walk from the old-growth blockades.

The gallery pieces reflect the connections that artists have built, both with the landscape and with those fighting to protect it. In an email interview, Demers recalled, “Some of the artists spent many days and weeks in the forest and became intimately familiar with the ancient red cedars in the grove. Some also developed deep friendships with the forest protectors at Eden Camp, a nearby blockade, and these relationships fed into the artwork that was produced, telling stories of community, struggle, and resilience.”

In August 2021, a selection of artworks produced by several of the artist residents were displayed at Fortune Gallery in the show Last Stand: Ancient Forests, Collective Action. The Legacy’s current display, Still Standing, expands on that previous iteration, inviting viewers to consider the impacts of old-growth logging across Canada.

Demers cited the importance of working with First Nations peoples throughout the residency project.

“I created the residency program with the support of Pacheedaht Elder Bill Jones, Roxy Jones, and upcoming Hereditary Chief Victor Peter. They bravely spoke out against the logging plans on their territory, which their community was not consulted on, either by the colonial government or the elected Chief.”

On the first wall of Still Standing, a video produced with Bill Jones highlights the import of old-growth forests for members of his community, including the power of old growths in establishing equilibrium and balance. Alongside the recording, viewers can learn of the detailed histories of the Eden Grove camp and of the non-violent protests at Fairy Creek, which resulted in over 1 000 arrests.

Unfortunately, Eden Grove is not an isolated example of destructive logging practices. With just 2.7 per cent of the old growth in B.C. still intact, these issues deeply affect many communities. In the 2022 show at the Legacy, an additional four artists joined the eight from the Eden Grove project, pushing the discourse outwards.

Demers told the Martlet, “I’ve invited other artists to participate who have connections with old growth on their own territory such as Gord Hill (Kwakwaka’wakw), Jordan Hill (T’Souke), and Carey Newman (Kwakwaka’wakw and Sto:lo).”

Newman’s video, The Last Totem, portrays the artist’s profound personal conflict grappling with centuries of carving tradition and the ethics of sustainability. The accompanying Cedar Maquette, envisions his latest totem. The marked wood, freshly cut in preparation, echoes the artist’s unanswered question for the future, “What comes next?”

On the work, Demers commented, “I’m particularly excited about the forward vision of Carey’s ‘Totem 2.0’ Maquette and his video The Last Totem, which envisions a new way of making totem poles without cutting down ancient cedar trees.”

As Demers recognized, despite the differences in approach, a connecting thread runs through the entire show.

“Throughout all of the artists’ work is the awareness that we are all impacted by the colonial, capitalist notion of nature as a commodity to consume rather than a source of life we are all a part of and depend upon for survival,” Demers wrote.