New gender-inclusive washroom sign in basement of the SUB

In late September, the UVSS introduced their newest gender-inclusive washroom in the basement of the Student Union Building (SUB). What once was a women’s bathroom was updated with signs and posters explaining the change, and the official bathroom sign was updated to indicate the facility is now accessible for all genders, as well as for wheelchairs.

The second bathroom in the basement remains designated as male. According to a notice posted by the UVSS, the decision to only change the women’s bathroom was due to the lack of physical space in the men’s. In order for the bathroom to become gender-inclusive, a screen sectioning off the urinals would need to be installed, and the room can’t accommodate both a screen and enough room for wheelchair access. 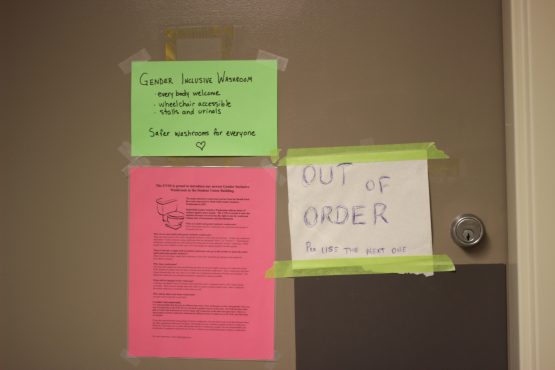 The SUB bathroom doors have been the centre of basement controversy. Photo by Cormac O’Brien, Editor-in-Chief

According to university code, all bathrooms must be accessible for wheelchair use.

“Essentially, it’s about time,” said Willa Budz, a user of the upstairs gender-inclusive bathrooms. “I’m really glad though because now I don’t have to run upstairs all the time . . . It’s definitely a step forward, I just really wish the rest of the university would follow suit.”

After one day of the sign being posted, it was torn down by unhappy bathroom users.

But reaction to the change wasn’t all positive, mainly due to the strange optics of having one male bathroom and one gender-inclusive bathroom.

“It felt weird because it seemed to suggest that anyone who didn’t identify as male would have to go into the gender-inclusive one,” said Johnnie Regalado, CFUV station manager. “But I think it was defeating the purpose of trying to take down those barriers and people’s preconceptions about washroom use. . .It just seemed very odd to me.”

“I’m happy to see that we do have more gender-inclusive washrooms,” said Alexandra Ages, a coordinator at the Food Bank and Free store. “That’s something I personally think is really important, especially in this space. [But] overall, I’d like to see it become a bit more accessible and have some more clarity to it.”

Ages also raised the concern that some Muslim women who frequent the SUB basement may have an issue with the gender-inclusive washrooms if they need to make adjustments to their hijabs without a male being present.

“I do believe that gender-inclusive spaces are incredibly important . . . [but] I do think that when it comes to respecting people’s right to different religious differences and stuff like that, gendered spaces still do matter. Just so we can ensure that Muslim community members don’t have to be put in a situation where they worry that their religious views are being violated,” said Ages.

Ages recommended putting clear signage on the gender-inclusive bathrooms letting people know where they could access gendered bathrooms if they wanted.

According to Noor Chasib, UVSS director of events, the men’s washroom could not be renovated without reducing the number of washrooms in the basement, which goes against University code as well. The only option the UVSS has to make both basement bathrooms gender-inclusive is to do a massive overhaul renovation of both bathrooms. However, this option seemed to take too much time and money, so the decision was made to leave the men’s washroom segregated.

“I know some people are ticked off by it only being one washroom and not both of them, and that’s understandable,” said Chasib.

The UVSS will file a report with the University administration in order to begin the process of overhauling both bathrooms.

Until then, the gender-inclusive sign has been replaced on the previously designated women’s bathroom. Flyers explaining the change have been reposted around the door.

“It’s still being looked into,” said Chasib. “We haven’t completely given up on it, but there will be a lot of work that still needs to be done.”

There will be more information available as the story develops.