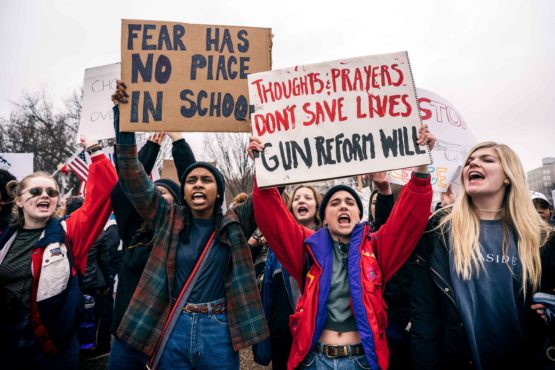 Students protest at the White House in favour of stricter gun control in America.
Photo by Lorie Shaull via Flickr

On Feb. 14, 17 people—mostly high school students—were shot and killed at Marjory Stoneman Douglas High School in Parkland, Florida. This tragedy adds to the ever-growing list of mass shootings in the United States. And as the news broke, everyone braced themselves for a repeat of the same rhetorical cycle: thoughts and prayers leads to re-invigorated gun control debate, leads to passionate conversations within specific echo chambers, concludes with lack of political and legislative action.

With the rise in grassroots activism—currently spearheaded by survivors of the Marjory Stoneman Douglas shooting — young people are leading the charge on pressing elected officials to enact some form of gun-control legislation.

The response from elected officials has been largely disappointing. When 16-year-old student Alondra Gittelson asked the speaker of the Florida House Richard Corcoran whether he would support a ban on assault weapons, she received a disappointing and patronizing answer: not in favour because, as he likes to tell his kids, you have to be careful how much power you give to the government.

Similarly, at a CNN town hall in Florida, surviving students and the family members of victims made sure to hold Sen. Marco Rubio’s feet to the fire. Notably, 17-year-old student Cameron Kasky asked Sen. Rubio if he would refuse to accept further campaign donations from the National Rifle Association (NRA). Once again, the answer was disappointing: no, he would not refuse. To date, Sen. Rubio has received over $1 million in campaign contributions from the NRA.

Twitter is no longer a safe space for politicians to tweet their meaningless platitudes —the  platform belongs to the youth who are seeking change.

The NRA has historically been strategic in blocking discussion of legal changes to gun-control, primarily through their financial contributions to political parties and candidates. According to CNN, 307 out of 535 current members of Congress have financially benefited either directly or indirectly from campaign contributions from the NRA. Last year, the NRA spent over $10 million to lobby against new restrictions, while their pro gun control counterparts contributed less than one-fifth that amount. Add that up with the $1.4 million courtesy of gun manufacturers and $10 million from other gun rights groups, and it’s not exactly surprising that the push for systematic change on this issue stagnates even just weeks after a shooting.

But if money, rather than the safety of students, is the language understood by politicians on Capitol Hill, perhaps we should be looking to corporations for political change instead.

Despite the fact that NRA membership, which is estimated at nearly five million Americans, has allegedly spiked since the Parkland shooting, corporations rather than politicians have been publicly distancing themselves from the NRA in the weeks following the Parkland massacre.

But Dick’s Sporting Goods, for example, made similar promises to stop selling assault-style rifles following the Sandy Hook massacre in 2012, but they only followed through on this change for approximately 8 months.

And the discount program that Delta ended? It turns out that only 13 people had ever participated — the cancellation was about as empty a gesture as could be.

We shouldn’t have to rely on businesses to enact social change, and it looks like this generation of activists realizes that. Born and raised in the age of social media, they understand the importance of grassroots activism and they will continue to use it to broadcast their messages.

Twitter is no longer a safe space for politicians to tweet their meaningless platitudes —the  platform belongs to the youth who are seeking change.

They are not waiting for their elders in politics and business to create a better world — they are organizing school walk-outs and beginning their own online and in-person lobbying campaigns.

But these kids are being tired of being patronized. They no longer want your thoughts and prayers — they want your action.