Bridge open to public after five years of Martlet reporting 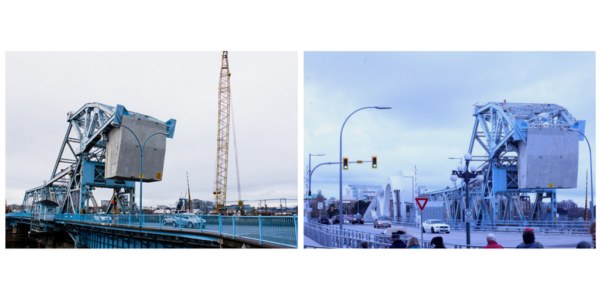 A picture of the Blue Bridge printed in our 2013 article that discussed the start of the new bridge construction next to a picture of both the old and new bridges in 2018 after construction.

I started my engineering degree at UVic in 2013 and I remember volunteering to write for the Martlet a month into the semester. One of my very first published articles was titled “A new downtown icon: the Johnson Street Bridge” and was printed in the Martlet’s November 21, 2013 issue.

The story covered the start of the new Johnson Street Bridge construction and the details behind its budget, planning, and referendum.

“Driving by the Victoria Harbour, from the picturesque Vic West community and into downtown Victoria, it is almost impossible to miss the landmark Johnson Street Bridge with its rusted, sky-blue paint and overhanging counterweight block,” I wrote. “If all goes according to plan in the replacement project, a new Johnson Street Bridge will open to the public in late 2015.”

Just as my university career was tested over time, the new bridge will have to earn its place in Victoria over time.

The new Johnson Street Bridge is finally complete; it officially opened to traffic on Saturday, March 31, 2018.

The new bridge, in all its sleek white beauty, stands proudly next to “Old Blue,” the amicably nicknamed old Johnson Street Bridge. The new bridge connects Esquimalt Road from the Vic West neighbourhood to Pandora Avenue on the downtown side. It features three lanes for vehicles, bike lanes in each direction next to the vehicle lanes, and a separate multi-use pathway (for both pedestrians and cyclists). All of these are now accessible for public use.

Another pedestrian-dedicated pathway will open this summer after the old bridge is demolished. The demolition and removal of the old bridge is scheduled for April 16 and is expected to take two or three days to complete.

I drove over the new bridge the day after it opened and was happy to see it finished while I was still a student here at UVic. I wasn’t very hopeful about Big Blue’s replacement three years ago when the Times Colonist put out an article announcing the new bridge was delayed by two and a half years and had already cost the city more than $100 million.

By then, I’d already resolved in my mind that the Johnson Street Bridge will only ever be something I wrote about in first-year and nothing more.

Everything else that the new bridge promised to include was actually built. As my old Martlet article mentioned, this includes “on-road bike lanes, a multi-use trail, and a pedestrian pathway.” The new bridge also lives up to its earthquake building standards and does have an “improved navigation channel for marine vessels.” It even surprisingly includes “a built-in plaza with a view of the harbour” as my old article claimed.

I went to attend the new Johnson Street Bridge’s opening celebration and the energy of the community was palpable. People were unbelievably, genuinely excited for this bridge — people like Victoria City Councillor Chris Coleman.

“You now see all the energy here, even those who were opposed, this is the way Victoria heads into the future,” Coleman said. And that doesn’t mean we have to diss the old bridge which is known as Big Blue, but in fact it was Gunmetal Grey for two-thirds of its life. It was black. So it served its purpose.”
Coleman makes a good point about the old bridge’s colour: things gain charm as time goes by. That’s the case with the beloved old bridge, which Victorians have come to embrace during its 94 years of operation (it was officially opened in 1924). In fact, many people fought for its restoration rather than the construction of a new one.

Coleman and I are on a similar kind of wavelength, judging by my old article.

“Just as the original bridge has become a landmark in the city, the future Johnson Street Bridge is planned to be a sight-to-see and a proud new icon of Victoria,” I wrote.

It isn’t guaranteed that the new Johnson Street Bridge will become a downtown icon, as I claimed it would be in my first year of writing for the paper. Just as my university career was tested over time, the new bridge will have to earn its place in Victoria over time.

But from the looks of the bridge and the welcoming it received at the opening, it seems to be right on its way to becoming an icon indeed.