New poet laureate hopes to give back to arts community 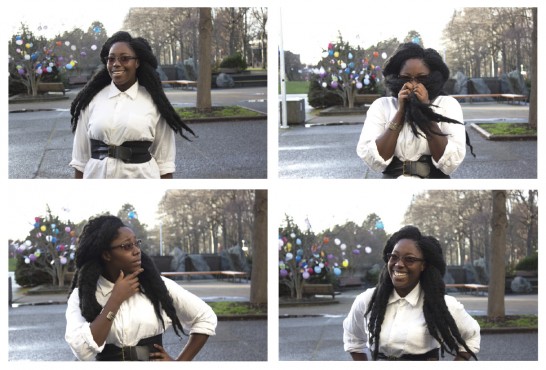 Ann-Bernice Thomas has ambitious plans for her new role as Youth Poet Laureate, including a blog and poetry magazine. Photos by Cormac O’Brien

If anyone deserves to be “the champion for youth and the literary arts” in Victoria, it’s probably Ann-Bernice Thomas.

A second-year Theatre and Creative Writing student at UVic involved in poetry, theatre, creative nonfiction, and screenwriting, there aren’t many literary arts that Thomas hasn’t championed.

On Jan. 14, 2015, Thomas was announced as the fourth Youth Poet Laureate of Victoria by the Victoria City Council. In a press release made the following day, the City of Victoria announced that Thomas would assume the responsibility of “[inspiring] and [engaging] local youth to share their stories and artistic voice through both the written and spoken word.”

Thomas has been a fixture in the Victoria slam poetry scene since arriving at UVic in 2014. She initially heard about the Youth Poet Laureate position through friends, and although her first application was unsuccessful, Thomas put her name forward again the following year.

“Everyone tagged me on Facebook saying ‘Apply!’” Thomas says. “So I said, ‘Okay, okay, alright.’”

Her application — complete with several examples of her work as well as her favourite books and her favourite poet (Warsan Shire, for the moment) — was accepted in December of 2015. Thomas’s appointment was publically announced a few weeks later.

However, Thomas admits that poetry is a relatively new endeavour for her, and she tells me she only started writing and performing her own work a few years ago.

“I got into poetry in Grade 12 and was really nervous and not that great,” Thomas laughs. “I speak really quickly, and when I’m nervous it just gets worse. But the poetry community here is amazing and they really helped me [with] getting comfortable and loving it.”

Double-majoring in Creative Writing and Theatre at UVic, Thomas admits she hadn’t really considered poetry as a vocation before the appointment. Even now, following such a significant confirmation of her work as a poet, her loyalties are split.

“I feel like [poetry] will be a big part of my life,” she says, “but I really want to end up having my own production company for film and theatre . . . I can totally interweave poetry into that, because poetry and theatre are the coolest things.”

Thomas also notes that the UVic atmosphere helps her as an artist.

“Being around creative people is insanely inspiring,” Thomas says. “Being in the fray of energy and passion is an experience like no other.”

David Leach, the chair of the Creative Writing department at the University, called the appointment of Thomas “fantastic,” and affirmed his belief that the combination of so many creative influences at UVic helps make Thomas an exciting writer.

“[UVic is] this kind of hothouse of other really creative young people, people stretching themselves and getting out of their comfort zones,” Leach told the Martlet, “and from what I’ve seen of Bernice’s work . . . she’s writing in an interesting way about interesting things that make us think in new ways.”

The idea of “new” plays a large part in both Thomas’s proposals for her term as Youth Poet Laureate and her work as a poet.

With plans to start a poetry blog and a self-sustaining youth poetry magazine, and to host poetry readings in different locations around Victoria, Thomas’s main goals are about bringing poetry to a new, youthful crowd.

Her work reflects that — Thomas writes what she calls “honest” poetry, tackling issues of “family and culture as a minority in a white country.” These issues themselves aren’t new, but Thomas’s unique and exciting poetic voice brings a fresh perspective to them that’s hard to ignore.

“[Activism] actually plays a lot into my poetry,” Thomas says. “I’m a really big believer in art that means something and that creates change and so it really keeps me thinking about who I am, what I stand for, what I want, and it keeps me up to date with what’s happening in the world and it gives me more things to write about.”

While Thomas is nervous about not completing everything she has planned, she is still excited for the opportunity to meet and interact with “the people that matter.”

She laughs, quick to clarify her statement.