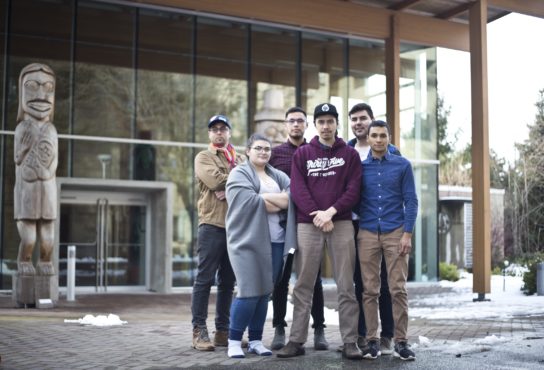 For Indigenous peoples living within Canada, there is no victory without sacrifice. While our cultures, homelands, languages, and protocols have all been trampled on and disrespected within the descent of colonialism, our desire to live true to ourselves has never diminished. It is our integrity that demands recognition of our pre-existing rights, title, and authority.

Canada has always opposed this recognition and the resulting surrender of Canadian sovereignty, except when it suits the needs of Canada. A dangerous and unethical relationship has developed between Canada and certain Indigenous peoples, as those who are willing to compromise their values are rewarded by the state, while those who protect their values are punished.

Indigenous peoples who hold true to traditional governance structures inherently come into conflict with Canada’s economic interests, as Canada’s claims to Indigenous lands is predicated upon our eventual disappearance. As a result, Indigenous profiteers have become favoured in consultation, and their voices paramount to Canada justifying its continued theft and exploitation of Indigenous lands.

Indigenous profiteers have lost sight of their ancestral vision, instead seeing the world through a Canadian lens that focuses on materialism, individualism, and economic prosperity.

This is ironic, as our integrity is the source of any rights we hold within Canada today. Even now, immediately following the Wet’suwet’en peoples’ resistance to Coastal GasLink and the RCMP invasion of their homeland, the B.C. NDP announced its intention to implement the United Nations Declaration on the Rights of Indigenous Peoples (UNDRIP). We must question this intention, as UNDRIP would undoubtedly condemn British Columbia.

Canadian efforts to “kill the Indian in the child” have ultimately failed, and Canada must wake up to the realization that its misdeeds will not be forgotten. Solutions to Canada’s “Indian problem” — such as the Indian Act and other colonial ordinances — continue to exist within Canada. Worst of all, the racial ideology that deems Indigenous peoples incapable of making their own decisions persists amongst Canadian settlers and is entrenched within Canadian law.

The goal has always been to reshape us in the image of our colonizers by making us dependent on Canadian methodologies, while ultimately separating us from our cherished relations. These unique relationships with community, children, elders, our ancestors, the land, the animals, the earth, and the water, as well a our relationship with the Creator and the souls within all things, give us strength. Since time immemorial we have recognized these relationships as being of utmost importance, having fostered them with an insurmountable attitude of respect.

Indigenous profiteers have lost sight of their ancestral vision, instead seeing the world through a Canadian lens that focuses on materialism, individualism, and economic prosperity. When Indigenous profiteers decry acts of resistance in favour of Canada’s economic agenda, they are undermining the struggles that earned them the right to participate within Canada’s economy. Canada continues to reward this behaviour, as the goal has always been to achieve unbridled access to our land and its wealth, by any means necessary.

We must respect the struggles of those who continue to earn our freedom as Indigenous peoples. Respect is medicine, and we have a duty to guide the profiteers of colonialism — to guide all people — to a realization that respectful relations will bring our planet back to good health.