No push back from Paradise 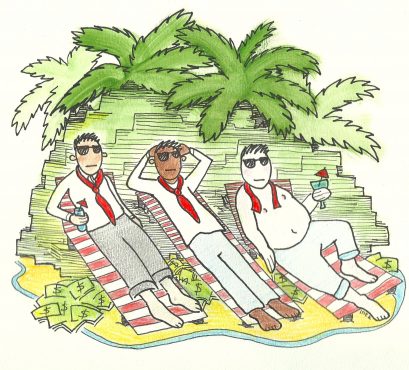 If you’re as cynical as I am, chances are you weren’t surprised by the contents of the recently leaked Paradise Papers that demonstrated the extent to which the world’s richest people are able to avoid paying taxes. There were no corners of the world untouched by the scandal that emanated from the 1.4-terabyte document’s release, which took several hundred journalists to make even moderate sense of. Precise figures regarding the amounts held in these accounts and their impact upon the source nations remain largely undiscovered due to the sheer volume of information, which requires processing. This leak may also only provide a fragment of the larger picture; there are other corporations who deal in ‘legal’ practices that have not suffered from the consequences of whistleblowing employees yet.

What surprised me was not that such sinister systems existed, but that we were able to learn about the situation at all. This news has only come to light due to a leak, likely from an unknown employee at Appleby, a multinational law group responsible for handling the finances of many financial giants— both wealthy individuals and corporations. The Papers were originally obtained by the German newspaper Süddeutsche Zeitung, the same newspaper that reported on the Panama Papers—a similar but smaller leak which occurred in 2016. The response to these papers, in both public and government sectors, has been underwhelming, at least in terms of concrete evidence and information regarding the mechanics of these schemes. While we have ample information to render them inoperable, there needs to be a legislative push to shut these tax havens down.

The journalists responsible for making sense of these Papers continue to make headway and report any major findings. As of Nov. 17, there have been more than 520 000 entities mentioned in the document, and thus far, these have shown that Nike and Apple are each guilty of avoiding taxes using outlandish schemes. The world’s largest commodity trader, Glencore, has also had a light shone on its various connections to other business, further demonstrating the interconnectedness of the economic elite. Over 120 high-profile heads of state (including the Queen of England) have been linked to tax avoidance schemes. Nothing has directly tied back to Trump just yet, but 13 of his advisors have used tax-dodging schemes.

Here in Canada, we learned that Stephen Bronfman, the Liberal Party’s Chief Revenue Officer and Prime Minister Justin Trudeau’s close friend, is included in the list of ‘foreign investors.’ According to the Paradise Papers, Bronfman used a $60-million offshore-investment scheme to avoid paying taxes. (Although this could be considered good progress for Bronfman, whose family was taken to court in 2001 for avoiding $300–600 million in taxes.) If Trudeau is concerned with Bronfman’s legal issues, he doesn’t seem to reflect that during social events — last year Trudeau controversially brought him and 43 other guests on a trip to the White House.

Bronfman has denied any wrongdoing, and there have been no visible efforts or motions at the federal level to outlaw such schemes, which are currently legal in Canada. However, the legality of the matter shouldn’t enter into it: it’s a morality issue.

None of Canada’s poorest are able to dodge income or sales tax; those in cramped apartments must shiver through harsh winters, as the exorbitantly affluent members of our society spend their winters on luxury yachts doing tours of the Caribbean (which were probably written off as tax-free business expenses). While food bank users are often critiqued for being a drain on the system, these wealthy individuals (often the ones doing the criticizing) deny our system billions of dollars per year.

The payment of taxes is essentially optional for these companies — as corporate practices require cutthroat tactics to remain competitive, proper tax payment becomes impossible. In an age where CCTV cameras are becoming the norm on city blocks and our every keystroke is recorded online, the corporations responsible for subjugating the physical world and economic systems which govern it, continue to operate opaquely.

Our government does the same, as the parties responsible for deciding our national fate hold private fundraising banquets at $1 500 per ticket. Campaign donations are untraceable, come with hidden caveats, and allow a small number of affluent people to disproportionately impact our House of Commons. Because of this imbalance of power through contributions, parties popular with corporate financial giants are able to advertise more prolifically and thus garner more votes. As a result, these parties are supported by wealthy individuals interested in influencing matters their corporations have a vested interest in: interests like loosened environmental restrictions, decreased social spending, lowered corporate tax, and restructured laws that remove tax loopholes. 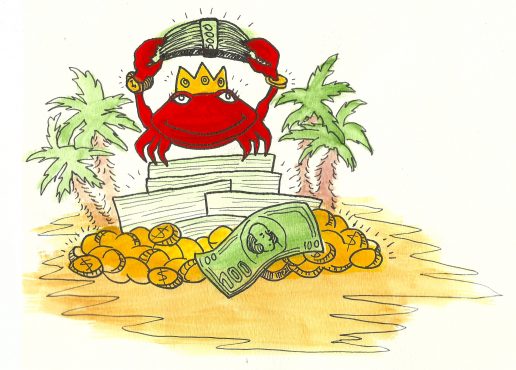 In many ways, governments more closely resemble corporations than they do a collection of their own citizens. In Britain, there has been much criticism of the ruling Conservative (Tory) party for not being willing to act on the information provided by the Paradise Papers. This makes economic sense for the Tories, considering some of their largest campaign donors are named in the Paradise Papers and that the Tories need the finances provided by them in order to stand a chance at re-election. Based on a 2014 estimate, the United Kingdom loses approximately $120 billion each year. This represents six times the funding required to restore the crumbling National Health Service, which the Tories have been criticized for neglecting to sufficiently fund. These numbers are, however, very hazy, and the amount of tax dollars dodged is likely to be higher than the previous estimate which doesn’t even factor in the Panama or Paradise paper revelations.

The numbers are likely to remain unclear for some time, due to the scope of the documents (which require organizing), and due to the secrecy of the entities involved. The leaked Papers may also only be the tip of the iceberg; but we, the public, must rely upon leaks like these to learn about similar schemes. There is otherwise no way, without new legislature, to investigate the extent to which this problem pervades.

Here in Canada, there have been no resolutions made regarding how best we ought to mitigate the problem of avoided tax revenue. Despite recently stating otherwise, it appears as though Trudeau has no interest in seeing large campaign donors, or his own affluent friends, disenfranchised through adequate taxation.

Trudeau has made statements about how deplorable the practice of tax evasion is, and the prime minister committed $1 billion to combatting tax fraud. That sounds fantastic, but considering that Trudeau holds a majority in the House (helped by the backers included in the Paradise Papers), he doesn’t need that money to correct the issue. All that $1 billion does is make him appear committed. Canada’s Revenue Agency is within its jurisdiction to go after those who use offshore accounts. However, rather than attacking the issue at the source and outlawing the practice, Trudeau has provided the CRA with extra money so they can attack more conventional forms of tax fraud. This will do nothing to abate the use of tax havens. Due to his control of the house, Trudeau could enact modifications to our existing tax laws that would require all profits acquired here in Canada to be taxed here in Canada: a simple resolution that has not even been mentioned in passing by our ‘spotless’ PM since the Paradise Paper’s release.

As I mentioned, the fact that these strategies to exploit economic systems exist comes as no surprise to me. What has surprised me has been the response to them: the leak and the lack of action by legislators. There should be continued investment into the investigation of these papers, followed by legislative action directed at maximal restriction of the negative impact these evasion schemes are causing us.

If there have been analyses of how much tax revenue might have been retained in Canada, then they’ve been kept quiet. Had these offshore tax havens not existed, I wonder what this tax revenue might have done for our country — lower tuition fees, perhaps? To put it into perspective, $10 billion in retrieved revenue could pay for a year of Social Sciences tuition at UVic for 1.6 million students.

This lack of immediate effect from the Papers is disappointing, and my expectations for immediate global revolution may have been overly optimistic. Considering the scope of these documents, proper digestion of their ramifications is vital. Now that the information is out, we will hopefully begin to see shifts towards greater governmental oversight. Any political party who resists the removal of tax loopholes is only proving bedfellow to the corporations.

Lobby groups may decry increased corporate taxation and push for decreased social spending due to government deficits, but without legislative action, corporations are left free to generate income for the sake of expanding the wage gap, leaving the rest of us behind.