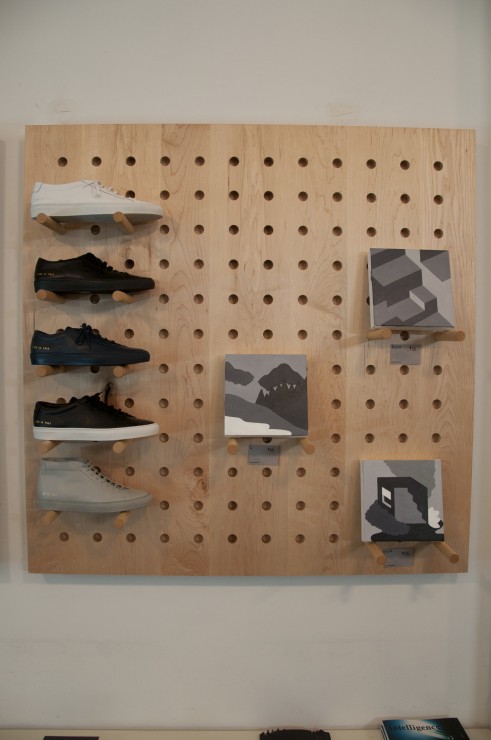 A sampling of art by Jesse Russel-Galbraith on display at Four Horsemen’s “Grey Remains” art show. Photo by Drew Tosten

On June 24, menswear store Four Horsemen hosted “Grey Remains,” featuring local artist Jesse Russel-Galbraith, as part of its series of monthly art shows. After cultivating a dedicated customer base, the store realized it could be not just a clothing store but a cultural hub for Victoria, and after the success of a show in November with local artist Billy Jackson, the displays became a regular occurrence.

Ryan Grifone, one of the Four Horsemen shop managers and the art show curator, describes the artistic tastes of one of the store’s owners, Miles Wishlow: “He’s always been into more unconventional art and clothing in general . . . Not exactly like high art that you’d see in a gallery typically.”

This comes through in Jesse’s DIY demeanour towards canvases, which is anything but typical. One piece was drawn on a broken skateboard. “A guy got really mad and he snapped his board in half,” Jesse says. “I waited a little bit because I was nervous. It was my first time at the skate park. I walked up to him and I was like ‘Can I have that? . . . He gave me a weird look and he’s like, ‘Yeah. Go for it.’”

How did this collaboration come to be? Jesse explains. “I went [into Four Horsemen] and I was asking them about art shows while buying my wallet, and Ryan was like, ‘I just followed this guy on Instagram, his name’s Jeerg [Jesse’s Instagram handle]’ . . . I was like, ‘Oh hey, that’s me.’ Literally right from that point, that’s when we started the show.”

“We have such a great space in Four Horsemen, a lot of blank walls,” says Ryan, “and we figured we might as well utilize it a bit more.”

As a self-taught artist who’s been taking it seriously for four years, Jesse has trouble thinking of an answer for what he does outside of art. “That’s a really hard one . . . I enjoy skateboarding. I really enjoy music,” he says, citing names of sombre artists like James Blake and more experimental groups like Death Grips as artists he’s into lately.

When asked about his artistic process, Jesse says “I mostly paint for me . . . as a self-expression sort of therapy. That’s what really all of this is.” This therapy manifests in the translation of his experiences to the canvas; music and skating are reflected in drawings featuring dark, sullen figures, or commissioned grip tape he painted for a show in the U.K.

When discussing inspirations, Jesse mentions one in particular. “I do enjoy Keith Haring,” he says. Keith Haring, a renowned street artist, once said of making art, “Don’t do it for anyone else” — a mindset that Jesse shares.

Jesse also shares his own advice for aspiring artists. “I would say enjoy your inspirations. When I’m painting I don’t really think about ‘Oh, I don’t want to copy this artist,’ because you’re going to copy some artists sometimes. That’s you learning.

“Really, just keep practicing every day,” he continues. “Don’t think about your technique yet.” He mentions that when he first started, he “couldn’t even hold a straight line for the longest time.”

Ryan tells me that “the [Four Horsemen] is kind of an extension of the people who work there, myself and our employees, as well as the owners.” This results in practices such as “keeping everything made locally.” What does the future hold for building this independent communal hub? Various ventures including coffee tastings, DJ mixes curated by local musicians like Laggard, “and more art,” says Ryan.

Of course, you don’t need to be a philosophy major to enjoy these shows, pondering ‘what is art?’ and the like. Underneath the assumptions of pretentiousness, these Four Horsemen shows start to feel like a simple gathering point for art-inclined people to socialize. And, as I looked around and saw people engrossed in banter both beyond and about the art on the walls at “Grey Remains,” I realized that it feels that way because it is.

To see more of Ryan’s work, check out his Instagram. For more art from Four Horsemen, check out their blog.