Now is the time for intersectional action

Stolen Sisters March as important as any demonstration 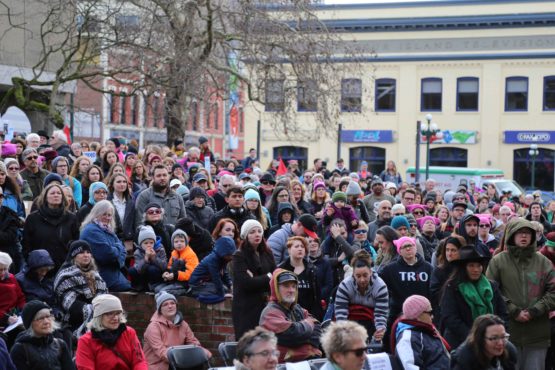 A photo from the 2018 Women’s March. Victorians need to turn up in similar numbers to the Stolen Sisters March. Photo by Belle White, Photo Editor

Victoria’s first Stolen Sisters Memorial March was held Feb. 14, 2009, on the unceded and traditional territories of the Lekwungen communities, Songhees, and Esquimalt First Nations. A nationwide event, the Memorial March is an opportunity for communities to remember and honour Indigenous women, girls, and 2spirit people who have gone missing and been murdered. On Feb. 17, Victoria will once again come together as a community to seek justice and to find healing.

There is a lot to heal.

In November 2017, the National Inquiry into Missing and Murdered Indigenous Women and Girls released an Interim Report that aims to provide Canadians with a clearer understanding of their work to date. Despite the information gathered thus far, we still don’t know exactly how many Indigenous women and girls are missing or have been murdered

We may never know how many sisters have been stolen in this country, but it is essential that we don’t lose any more Indigenous women, girls, and 2spirit people to violence. In order to do that, we must act.

We can not allow space for people who seek to deny the severity of the cultural genocide committed against Indigenous people in Canada, including the role played by the Residential School System that is perpetuated by the foster care system now.

We must hold the media to account when it perpetuates racist stereotypes, as it did with the death of Tina Fontaine. Fontaine was 15 years old when she died in Manitoba in 2014, and her body was eventually found in the Red River after having been weighed down with 11.5 kgs of rocks. When the trial started for Raymond Cormier, the 55-year-old man charged with the murder of Fontaine, Canadian media outlets jumped on the fact that Fontaine had alcohol and cannabis in her system when she died.

We must participate in the Stolen Sisters Memorial March with the same fervour found at the Women’s March in January. At Victoria’s Women’s march, the word of the day was “intersectionality.” The thousands of people in Centennial Square cheered at the notions of protecting and advocating for Indigenous women, and now is the time to prove that this enthusiasm can be transformed into action.

Whether people commit to providing better support in their day-to-day lives, or take a longer approach with sustained political action, change must happen.

It is the Martlet’s responsibility — as a paper without any formal territory acknowledgement in our paper or newsroom — to help change how some media publications report about Indigenous people and take steps to establishing better relationships.

It is our responsibility as settlers to recognize the ways we contribute to, and benefit from, colonialism and racism in society today. If we want to be honest about dismantling systems of oppression, it is our responsibility to seek information regarding the long history of these systems which continue to marginalize Indigenous women and girls.

And on Feb. 17, it is our responsibility to show up and listen.