Notice: Trying to get property 'category_parent' of non-object in /var/www/martlet.ca/web/wp-content/themes/cldevtheme/functions.php on line 273 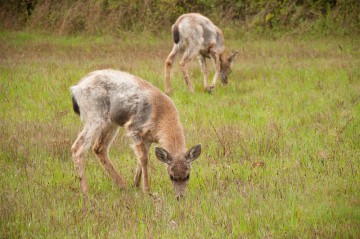 I don’t fancy myself as a wildlife photographer. There’s no way I’d get up that early in the morning. However, the glut of feral deer around the UVic campus and my home forces me to be somewhat proficient at capturing these wily creatures. One evening, deep in the throes of writer’s block, I opened my front door to take an evening stroll only to come face to face with a young buck making a meal out of my mother’s flowers. In the distance, two young women, laughing quietly to themselves, were trying to take a cell phone picture. I shut the door, ran upstairs to grab my own camera rig and tried to photograph it myself. When I whispered to the two onlookers that they could take the first photo, it frightened the deer off. So much for keeping a low profile.

Over the past year, I’ve spent my fair share of time chasing photos of deer, so here are a few points to keep in mind.

1. Give it space; do not impose and don’t push your luck.

While I want a good photo, I am not there to terrorize animals or make life difficult for them. If a deer notices me, I just stand still and avoid eye contact, while still keeping tabs on it with the corner of my eye. In a few seconds, it should go back to eating, or pooping or whatever it is they do. Don’t be an idiot and start teasing them or intruding on their space. There are plenty of videos on YouTube featuring knobs who pick fights or treat them like you would a pet who is already acclimatized to humans. Though docile most of the time, deer are still feral and unpredictable.

One curious thing I’ve noticed is that flash does not seem to bother deer. When I finally found a deer standing on the middle of the road that evening, my automatic flash overcompensated and emitted an enormous burst of light, but it didn’t even turn its head at me. My one experience is supported by acclaimed wildlife photographer Moose Peterson, someone with far more experience than I. He routinely uses flash, and he says it doesn’t seem to perturb them in any way. According to him, though, twitching your finger to trip the shutter (your finger movement) might scare the critter.

This is not a pass to start firing intense bursts of light at deer over and over. If you need one or two photos, grab a few, and then leave them alone. Use a long zoom so you can keep your distance. Don’t impose. Always be mindful of them, and if they aren’t ignoring you after a minute or two, it would be best to leave and wait another day. 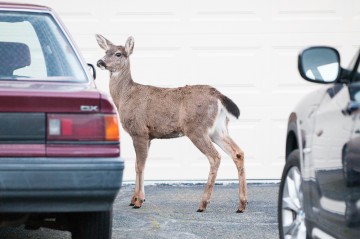 Deer are not particularly fascinating subjects on their own. They certainly aren’t lions or elephants, nor are they as cute as the bunnies that took over UVic a few years ago. However, what is interesting is seeing such large mammals in yards, casually munching on hedges or traipsing between cars. Their tenuous relationship with humans is what makes it interesting for me, and I think about this interaction with each photo I take. So far, the clearest example of this was when I found a deer in a driveway between two parked cars. My goal was to have come away with a photo that could, with a single glance, summarize a story about the urban deer issue. It’s not a masterpiece by any means, but it makes its point quickly.

If there are deer on people’s lawns, stay on the sidewalk, and respect the privacy of the neighbours around you. You don’t want angry people along with angry deer. Lingering too long outside a house with a telephoto zoom could be somewhat disconcerting. Stay no more than a minute or two, and if you’re asked, explain that your focus was the deer on their lawn, not the home behind it. While flash might not scare deer, it may scare humans.

If you’re a frustrated gardener, remember: the deer might eat your pansies, but they probably won’t eat your photos. Keep your wits about you, don’t intimidate your four-legged subjects, and you could end up with something good to show.