On-set for The Devout: A feature-length film by UVic MFA grad Connor Gaston

Walking up a sloping driveway lined with moss-covered rocks, large ferns spilling onto the gravel road (and no mobile reception), I feared for my safety. It looked like the set of a horror film, not a crisis-of-faith drama. The Devout is an independent film shot in Sooke and written and directed by the award-winning Connor Gaston, a UVic Master of Fine Arts graduate. The premise follows a devout Christian father who believes his sick daughter is a reincarnated astronaut. The movie doesn’t deny or confirm this claim, but hopes to stir questions in the viewer. 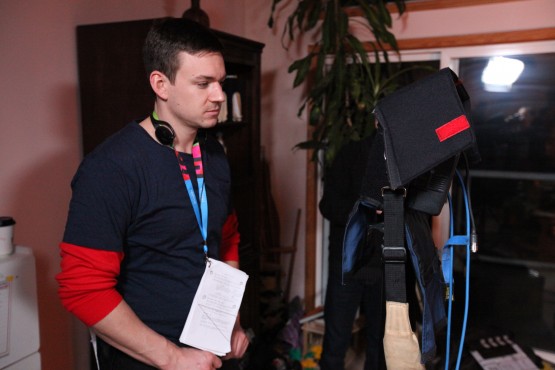 I tripped on a mountain of shoes entering the crowded house. The set consisted of six rooms; the central space was the living room with a kitchen and dining room to the right and multiple bedrooms down to the left. A petite young woman with luminous brown eyes introduced herself as Amanda Verhagen, one of the producers. Following her down the hallway, pushing past bodies wrangling wires and reels of tape, we entered a small den. Daniel Hogg, one of my former TAs for the writing department, stood in the doorway with a smile as broad as his headset. Verhagen said, “I’d never thought a theatre student, writing student, and TA would ever make a feature film, but here we are.”

[pullquote]“It was really great to bring together Victoria favourites and really utilize the local community to make the film.”[/pullquote]

The Devout has 20 cast members, 25–30 crew, and about 150 extras. Filming locations include an elementary school and church, and two houses; exterior and interior. The crew began filming on Jan. 8 and hope to wrap up by the 31st. The film is sponsored by CineVic and received funding after winning a TeleFilms Micro-Budget award. Most of the staff are Victoria residents who support the story being told. “Everyone here [Dan and I have] worked with before on other shows, said Verhagen, “so it was really great to bring together Victoria favourites and really utilize the local community to make the film.” The passion behind The Devout lies behind the success of the story and the people bringing it to life.

Most independent films don’t have a budget for trailers or advertising and rely on getting noticed at film festivals. This happens by people watching the film and talking about it. Daniel Hogg, producer of The Devout and Two 4 One, caters to people who like movies and knows how to reach them. “The first round [of screenings] will be at film festivals and [will] gather attention there, then word-of-mouth can spread. Two 4 One — after the first couple of festivals, we had other festivals from around the world contacting us. Independent films are really dependent on word-of-mouth,” said Hogg.

A voice called out, “We’re rolling!” to which both Verhagen and Hogg echoed immediately. A long silence ensued. “That’s a cut” signified the continuation of our interview. Gaston poked his head into the den during a few moments between scenes. The Devout is his first feature-length and tells a different tone than in his other short films.

Gaston was most excited about filming with a dog and a four-year-old. “She’s really amazing! Everyone was terrified—I was too. It’s really ambitious—you gotta push it, you know. Try new things—things you’re scared of. No point in doing something safe.”

Godhead and Two 4 One will be playing during the Victoria Film Festival Feb. 6–15.