Orange Shirt Day opens the pathway to truth, and the truth to reconciliation

The glow of brightly-coloured t-shirts worn by hundreds of students, staff, and faculty at UVic on Friday, Sept. 28, demonstrated a dedication to listening to the truth of residential schools for the sixth annual Orange Shirt Day.

Orange Shirt Day originated in Williams Lake, B.C., and was inspired by the experience of Phyllis (Jack) Webstad, who, on her first day of residential school in 1973, was stripped of a new, brightly-coloured orange shirt her grandmother had gifted to her.

The central event of the day was a panel — titled Why Art Matters to Reconciliation — which took place at the First Peoples House at UVic. The panel featured the stories and artwork of residential school survivors and intergenerational survivors.

“You’ve got to get to truth before you get to reconciliation,” UVic President Jamie Cassels said, “Orange Shirt Day is [about] confronting the truth.”

“[This day] helps us to think about the trauma, the harm, the injustice that Indigenous people went through, and we need to do that before we take the next step [towards reconciliation].” 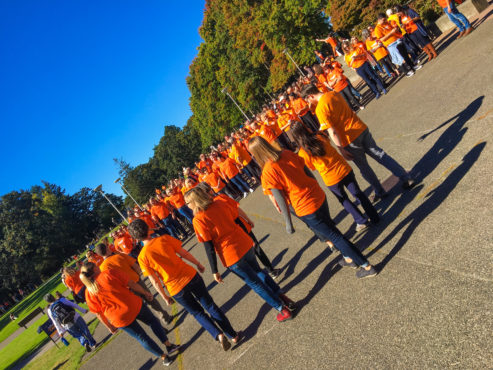 Webstad describes the shirt her grandmother gifted her as “so bright and exciting – just like I felt to be going to school!”

“[Webstad] had all of her clothes taken from her and she was stripped and put into uniform,” said UVic Chancellor and Truth and Reconciliation Commission honourary witness Shelagh Rogers, who introduced the Orange Shirt Day panel.

“That loss has come to symbolize so much else,” she continued, speaking of residential students being stripped from their families, their communities, their languages, cultures, spirituality, and possibilities. “Generations of children weren’t able to live up to their fullest potential.”

“That said, I really want to pay respect to the resilience of survivors and intergenerational survivors, because the strength of Indigenous people in Canada is just [inspiring]. You can see it rising right now, and it’s a really beautiful thing.”

Survivors at the gathering spoke of abuses and injustices that are difficult to fathom.

“I’m 71 now, and it’s taken me since I was 16 years old to deal with this, and I’m still dealing with it. It doesn’t go away. And those things transfer to my children. My children have suffered.”

Gina Laing of the Uchucklesaht First Nation was the first survivor to speak at the panel about her traumatic time at Alberni Indian Residential School.

“I’m 71 now,” she said, “and it’s taken me since I was 16 years old to deal with this, and I’m still dealing with it. It doesn’t go away. And those things transfer to my children. My children have suffered.”

Laing was grabbed by her hair, thrown across a stairwell, and beaten for speaking her language on her first day of residential school.

She stayed curled up in a ball all day until they sent someone to find her. “The first thing she said to me was, ‘did you speak our language’ and I said ‘yes’ and she said ‘you are never, ever to speak our language,’ and I haven’t to this day. And I’m sad about that.”

The atrocities Laing experienced extended to sexual assault by the school’s administrators, which happened repeatedly while Laing was at residential school. The wounds she endured continue to bleed to this day, she says.

Laing believes these childhood experiences  contributed to how she treated her own children.

“I wasn’t such a great mom. I had no example for a mother and no teachings. All I knew was violence. They taught us how to be wronged.”

But when Gina’s daughter April Laing spoke next on the panel, she expressed how thankful she was for Gina’s motherhood.

Atleo said he didn’t realize how much damage was done to him from all the abuse he incurred over his years at residential school, and he turned to alcohol to bury his trauma.

“I am so thankful my mom was strong enough to keep going,” April Laing said. “She wasn’t taught parenting skills. She had no mom to learn that from. She fell down, she was picked up by her hair.”

“When I fell down, my mom helped me up. My mom held me and loved me.”

Walsh said this artwork is “important because the legacy of residential schools in Canada is largely one that’s recorded by adults and left behind in the form of writing in archives.”

“What the children’s art does is it allows us to understand this very important era in Canadian history through the children themselves, through the ideas they left behind in the images and objects that they’ve made.”

Mark Atleo of the Ahousaht First Nation, who also spoke on the panel, was the painter of one of the childhood artworks that Walsh helped repatriate.

The tear-streaked cheeks of the panel speakers and the audience at the gathering indicated that this year’s Orange Shirt Day succeeded in bringing more truth into the world through those who participated.

“When my painting was returned to me, I was reluctant to accept that I had a painting,” Atleo said.

Atleo said he didn’t realize how much damage was done to him from all the abuse he incurred over his years at residential school, and he turned to alcohol to bury his trauma. His reunion with his piece of art from his childhood helped him to uncover that trauma and to work on recovering from it.

“After all that work was done, what a difference. I got part of my soul back.”

Atleo’s family had come from New Brunswick, Edmonton, and Washington state to the Truth and Reconciliation Commission 2013 National Event in Vancouver to witness his reception of the art — art that he had made while trapped at residential school, longing to be with those family members. Decades later, Atleo’s longing was fulfilled as his art brought them all together for the event, along with over 1 000 other witnesses.

The tear-streaked cheeks of the panel speakers and the audience at the gathering indicated that this year’s Orange Shirt Day succeeded in bringing more truth into the world through those who participated.

Chancellor Rogers summed up the necessity of listening to these stories: “Truth has a disinfectant quality. Once we know the truth, it can start to clear the cobwebs away, and it isn’t until we know the truth that we are able to move toward reconciliation.”