May 29 march draws hundreds to downtown 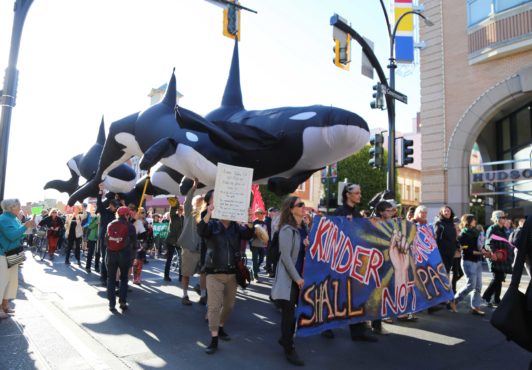 Orcas fly over protestors at the march. Photo by Belle White, Photo Editor

Disgusted. Angry. Disappointed, but not surprised. Those are some of the words that Victorians used to describe how they felt after becoming surprise owners of a 60-year-old pipeline on May 29.

The decision came after months of dispute between Canadians as to the best route forward for the Kinder Morgan pipeline. Prime Minister Justin Trudeau, Alberta Premier Rachel Notley, and many other Canadians supported the expansion and asserted that it must be built in the national interest.

Many B.C. residents, including Premier John Horgan, resisted that notion, invoking a stand-off that seemed to be going nowhere — that is, until Finance Minister Bill Morneau announced the government’s purchase. 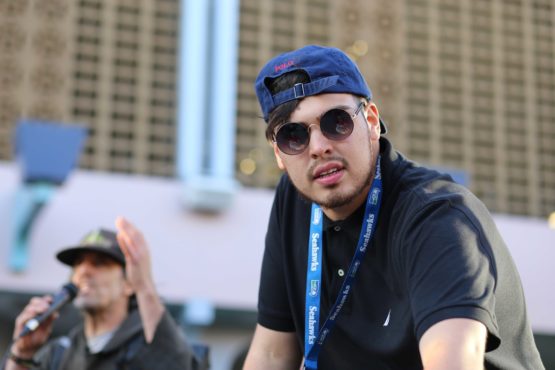 Cedar George-Parker, one of the speakers at the march. Photo by Belle White, Photo Editor

Spurred by frustration at their own government, Victoria residents gathered on Thursday, May 31, to demonstrate that their coastal community did not support the federal government’s plan.

“It’s so beautiful to see all these people here today, to feel the mood right here, to feel the vibe of change,” said Cedar George-Parker, one speaker at the march. “This is what happens when good people come together.”

The mood of the three-hour march, which started at Wharf and Government Street and ended in Centennial Square, was unified in ardent resistance. Even with short notice, march organizer Emily Thiessen estimated that 1 000 people showed up to make their voices heard regarding the pipeline’s future.

“It says people are angry,” says Thiessen. “People in Victoria, people who live here, we look at the mountains and ocean every day. And I think when people heard that announcement, that our government is buying this pipeline, I think people were just extremely angry and ready to do something about it.”

There was certainly no sense of resignation among the crowd, who walked the blustery downtown streets with signs, giant inflatable orcas, guitars, and drums. The procession stopped several times, once at Douglas and Fort and yet again at Douglas and Yates, to dance and chant. 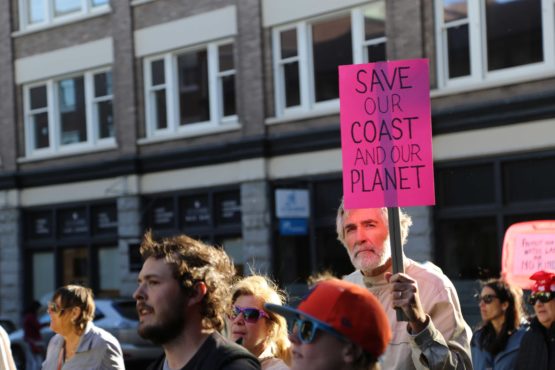 First Nations activists, speakers, and Old Ones marched at the front — leading in a fight that so often forgets them, Thiessen says.

“It really makes me angry that when you hear Morneau and (National Resources Minister) Jim Carr speaking in their press conferences, and even the questions asked by reporters, it’s all about a battle of jurisdiction between the federal government and the provincial government,” Thiessen says. “But that’s not the only jurisdiction that’s at stake here, right? 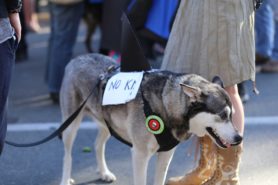 “A really important thing that Trudeau has to remember is that the whole route of the pipeline, especially the people who are really directly affected over in Burnaby, Tsleil-Waututh territory, that’s all unceded,” she says. “And I think we saw that today—we saw a lot of Indigenous folks claiming space and saying, ‘we’re still here,’ even though often that part of the issue is forgotten by the mainstream media.”

The march is not the first of its kind, nor will it be the last. In Burnaby, on Tsleil-Waututh territory, despite a recent injunction, protesters still build encampments and more plan to join them. (Throughout Friday’s march, Thiessen and her fellow co-ordinators informed demonstrators about opportunities to head to the mainland to support those already there.)

Silhouetted by the sun setting behind the mountains to his right, George-Parker reminded the crowd of concerned Victorians that the demonstration is just another sign that the pipeline is doomed to fail.

“There is nothing that can stop us from protecting our young one’s future,” cried George-Parker. “No government, no Trudeau, and no Kinder Morgan! They can’t stop us! Nothing can stop us!”

With files by Sara Lax 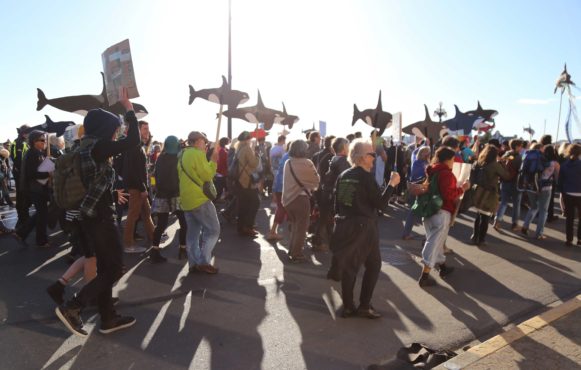