On Feb. 1, it was announced that Cullen, a professor at UVic’s School of Earth and Ocean Sciences, made the Canadian Space Agency’s shortlist, becoming one of just 72 chosen candidates from a pool of almost 4 000 applicants. The winning two candidates will be announced in the next few months.

The Martlet chatted with Cullen about the next steps in the candidate process, the importance of space travel, and powdered beef jerky.

The Martlet: Firstly, how does one even begin to become an astronaut?

Cullen: All of the qualifications that one must meet stem from a fair amount of formal education or work experience. And so in my case, studying at the university level and taking a degree in the natural sciences and moving on to do a PhD and then working here at the university in the capacity of a professor — that was really the main preparation of meeting the experience and the expertise. The astronaut corps is interested in people who have engineering experience or are medical doctors and professional pilots. Some of the candidates are military and have been trained to fly jets.

They also want candidates who have working knowledge of the natural sciences like geology or geochemistry or a fundamental understanding of climate, because some of the job of an astronaut is to carry out experiments on the International Space Station (ISS) that requires scientific expertise. Historically, when you look at the Apollo moon landings it was quite important that the astronauts be trained to understand geology and return samples for scientists to analyse and understand the history of the moon. A lot of the application process initially focused on demonstrating that one had training and competencies in areas of science, engineering, and of medical sciences.

What kind of assessments will you undergo in the following weeks?

Up to this point, outside of the written applications, we wrote some assessments on judgment and cognitive ability, and then there were some preliminary medical histories and a medical exam. The first assessment of the 72 [final-round candidates] has just finished up and that number will be diminished, and more assessments will occur.

What about the psych tests?

There were certainly aspects of the test that looked at one’s ability to make decisions under stress and how one interacted with the other candidates in situations where you’re problem-solving and, again, working in extreme conditions with either time pressure or difficult tasks. As we move on in this process I imagine there would be more of a formal and professional assessment of one’s temperament and social skills.

If you were selected, what would be your biggest concern going into space?

I have a lot of confidence in the team at the Canadian Space Agency. The talent and teamwork that the agency brings to preparing and training astronauts for space flight is so thorough that they really never put you in a position where you need to do something that you’re not capable of doing. There’s always the concern of problems during launch and landing but spacecraft are always being improved.

On that front, while it seems extreme to some people to think about travelling into space, more [of a concern] for me is potentially the time one has to spend away from one’s family during the training process to become an astronaut, and then mission-specific training that might keep you away from home. It’s those personal concerns that I spend more time thinking about — wanting to serve as best I can as a part of the astronaut corps, and balancing that with life with your family, being there for them as well. 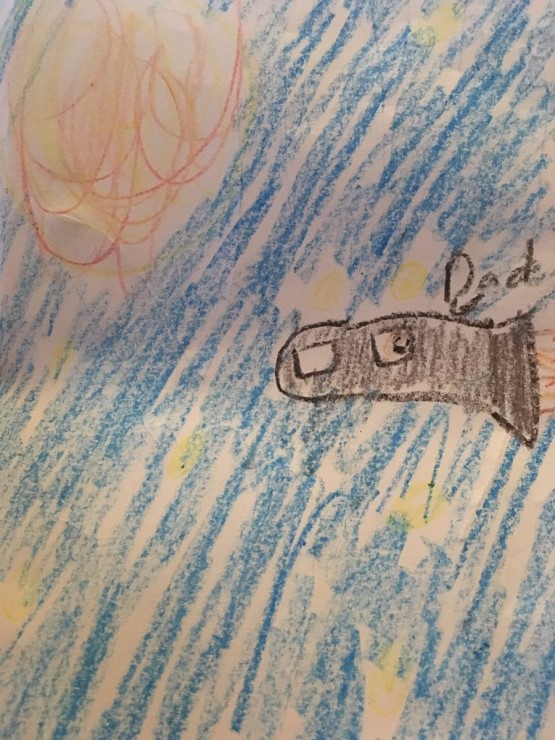 A drawing by one of Cullen’s kids. Photo provided.

Can one still enjoy astronaut movies knowing the technical aspects of space travel?

As with any movie dealing with the aspects of science or science fiction, you can always sit and poke holes in plots and technologies that you know are either unlikely or impossible. But I love sitting down and watching movies that are well done and that chronicle real or fictitious space exploration. It really captures your imagination.

Has space food improved from the powdered jerky and Coke we saw as kids? I read that Chris Hadfield ate maple syrup cookies and candied wild smoked salmon at the ISS . . .

So bringing very Canadian items into space. He [Hadfield] is a pretty interesting and amazing guy. It would be nice to be so far away and have something that reminds you of home.

And finally, have you ever received a nonchalant response from telling someone you’re pursuing space travel?

Generally, people are excited about the prospect of the competition and the naming of the next astronauts, but there are some people who respond, just as those who respond to individuals who like mountain climbing or doing other extreme sports or hobbies, who wonder why would anybody want to do that. That response is certainly less common but some people only see the danger and the risk. Obviously if you are going to participate in active exploration and discovery there are some risks, but if you look past them, there’s the potential to find new things that are useful for Canadians, whether it’s new technology or medical techniques that can help people out.