Leah McInnis is good at finding art in unusual places.

McInnis is a Victoria and Vancouver -based artist, working in the second year of the MFA program at UVic. Her multidisciplinary practice is interested in subverting the commodification of contemporary painting — or, as McInnis calls it, “keeping it real.”

It started when she was young.

“When I was 16, I took a broken skateboard deck from my boyfriend at the time — I painted on it and nailed it to a board and I took it to this kind of alternative consignment shop in Edmonton on Whyte Ave,” she says.

“I brought it there and I sold it on consignment, and I used to phone the store every month from my mom’s house in Fort McMurray just to be like, ‘did it sell yet?’

Now, in McInnis’ studio, raw, colourful canvases hang from the walls, tacked up with a staple gun. Much of the work was completed during her first year of the MFA program at UVic.

The unusual canvasses have stayed, but the motivation behind her art has changed.

“I’m not interested in the commodity aspect of painting, which is so inherent to the medium. It’s kind of hard, or impossible to escape that, and I am always looking for ways to subvert that, and I think I do, through the materials.”

These materials are often sourced unconventionally: supplies that her colleagues might discard from their own studios become a starting place for many of her works.

“I was working very closely with Sandra Meigs (a professor at UVic) before she left. She was discarding massive six by six foot stretchers. I would take those and she would also give me canvas.”

“[The canvas is] not of a high enough quality to be in the Art Gallery of Ontario but it’s okay for me to show in Victoria for a week [before I] discard it myself.”

Her current series of paintings, Down Shades (2017) and Modern Dog (2017) are an amalgamation of gestural forms and cartooning that showcase McInnis’ sharp sense of wit.

“I think humour is a very strong tool that can act like a bridge, in life as much as art. I think a large part of my communication with people all the time is through humour.” 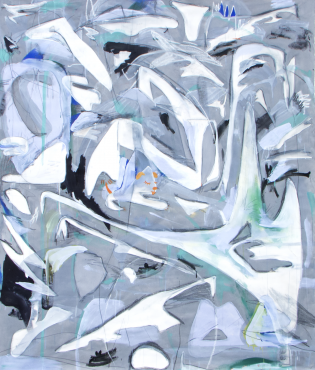 McInnis has been influenced by the Swiss artist Dieter Roth and, at a younger age, the Beautiful Losers (an anti-establishment art movement in the 1990s that promoted the use of reclaimed and DIY art supplies).

Having the opportunity to share adjacent studios with other MFA students and professors at UVic has also been a source of inspiration for her.

“There’s only 11 of us. We’re so close and everyone has different approaches to making things,” McInnis says. She enjoys the camaraderie but still sticks to solo work for now. “I don’t feel the need to make collaborative work, but I’m not opposed to it either. Just being in art school, everyone is constantly an inspiration.”

McInnis often begins her process by referencing shapes she knows from muscle memory. The paintings in her studio contain large, globular forms: indiscernible forms of nude women, pairs of underwear, and other images she points out to me.

“I have repeating forms that reference graffiti culture but also reference landforms or island forms,” she says. “Those are the same gestural marks that repeat and become these things. I can see them everywhere; one of them kind of looks like a penis. There are two or three nude women in that painting. I don’t know if anyone sees them, though. It might be because I watch a lot of Keeping Up With the Kardashians.”

One of her more recent works, Eco-mansion on a Cliff (2017), critiques the mania of eco-sensibility in cityscapes, and explores urban utopias. 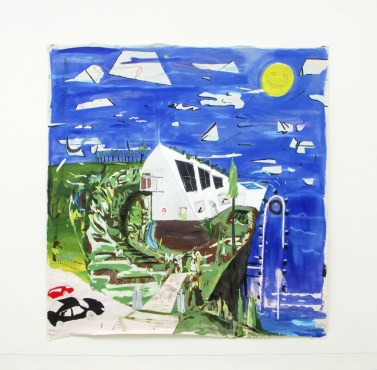 “I was looking on real estate websites at houses and land, and really getting into the rhetoric that is used. It’s really kind of funny. It’s like by appealing to all these environmental sensibilities, it can go off the other side. It can just become another tactic in capitalism.”

I asked McInnis where she sees her work best placed, given that non-commodification is an important consideration within her practice.

“I don’t really know where they go. But if someone wants to buy them that’s great . . . but I’m not trying to sell them. Maybe I just need an agent. It’s hard to be the producer and the businessperson and the seller. I was reading an interview with an artist and he was saying 20 per cent of your time should be hustling, and I’m like, ‘dude, I don’t want to do that. That sounds awful.’”

McInnis’s collective, MOPE, will be showing Vortex to Eden on Jan. 4 at the 50/50 Arts Collective. The exhibition is an examination of pseudo-science, conspiracy theories, and potentials for Utopia. Leah also has an upcoming solo exhibition on April 4 at Exchanges Gallery.

If you want to see more of Leah Mcinnis’s work, find her on Instagram @leah__mcinnis