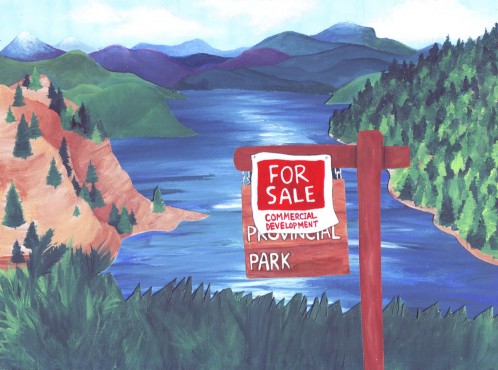 As of November 25, 89 people, including two of David Suzuki’s grandchildren and author J.B. MacKinnon—a former Martlet co-editor, have been arrested for interfering with survey work conducted by Kinder Morgan. The work, which involves drilling two 250-metre deep holes, 15 cm in diameter, is meant to determine the feasibility of tunneling the Trans Mountain pipeline through Burnaby Mountain, a municipal conservation area. The City of Burnaby is now challenging this in court, alleging that the survey work has damaged the park, and that the NEB cannot ask Kinder Morgan to conduct these surveys and ignore local bylaws that protect the area.

Opponents of the pipeline project are not facing climate change deniers (who have been resoundingly defeated), but rather climate change defeatists: those who argue that increasing energy demands from developing countries need to be satisfied somehow, so we might as well gain from it.

The provincial and federal governments have encouraged this as best they can. Provincially, a June 2013 memo described ways of altering provincial park borders to allow pipelines and transmission lines “if no economically, environmentally or technically feasible alternative exists.” Federally, the ostensibly independent NEB, whose members are appointed by the federal government, is stacked with former energy executives. In the case of the Trans Mountain pipeline hearing, participants like former B.C. Hydro CEO Mark Eliesen have criticized the process as “a farce”, noting that the NEB did not compel Kinder Morgan to answer 95 per cent of intervenor questions it did not originally answer, or face oral cross-examination (unlike past NEB reviews).

More importantly, the hearing process only covers localized environmental issues like spills. According to its website, “The Board does not intend to consider the environmental and socio-economic effects associated with upstream activities, the development of oil sands, or the downstream use of the oil transported by the pipeline.” which ignores the project’s effects outside our own borders.

It would be foolish to ignore the benefits of fossil fuels, some of which can’t be replaced by renewable alternatives yet. However, these benefits come with long-term consequences. If pipelines like Trans Mountain are built or expanded, it will become ever harder to wean ourselves off a dangerous fossil fuel habit that may not be profitable for long. If governments continue to strengthen emissions regulations, the value of fossil fuels will decrease. Morally, it is reprehensible to leave a hostile climate to future generations by quietly accepting a difficult but necessary transition from fossil fuels as simply impossible.

Even though the project has global implications, local citizens are best placed to act in their own communities. This week, the NEB is hearing testimonies on the Kinder Morgan project from local First Nations here in Victoria. Hearings are taking place from 9 a.m. to 4:30 p.m. on Thursday and from 9 a.m. to noon on Friday at the Victoria Conference Centre, and they are open to the public. We’d encourage everyone to attend and observe the process (and its flaws) first-hand. It’s our duty as B.C. residents, and as responsible global citizens.